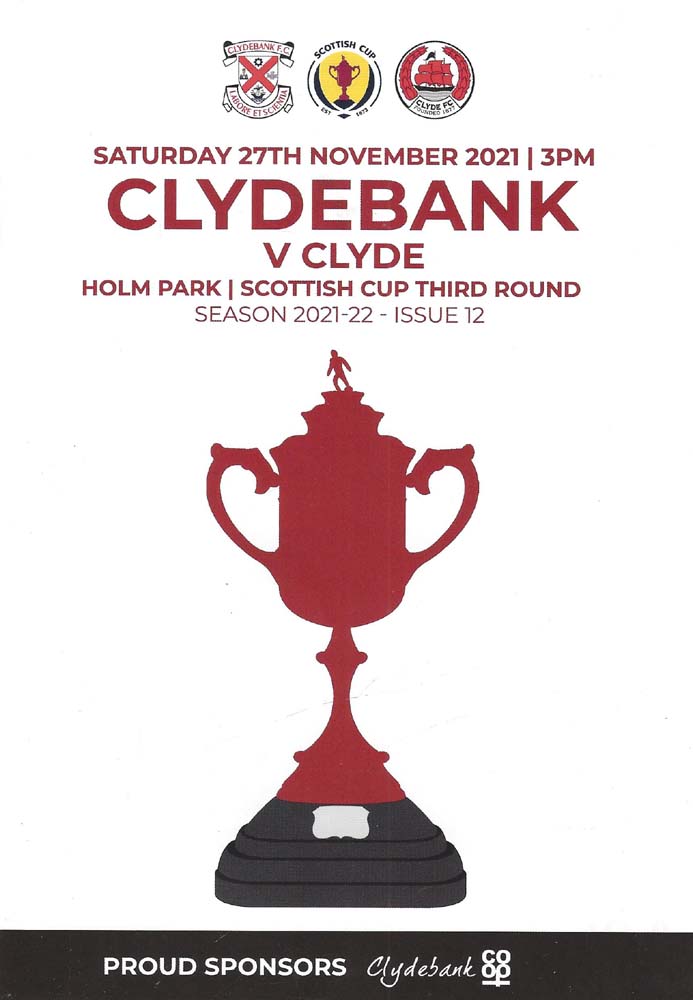 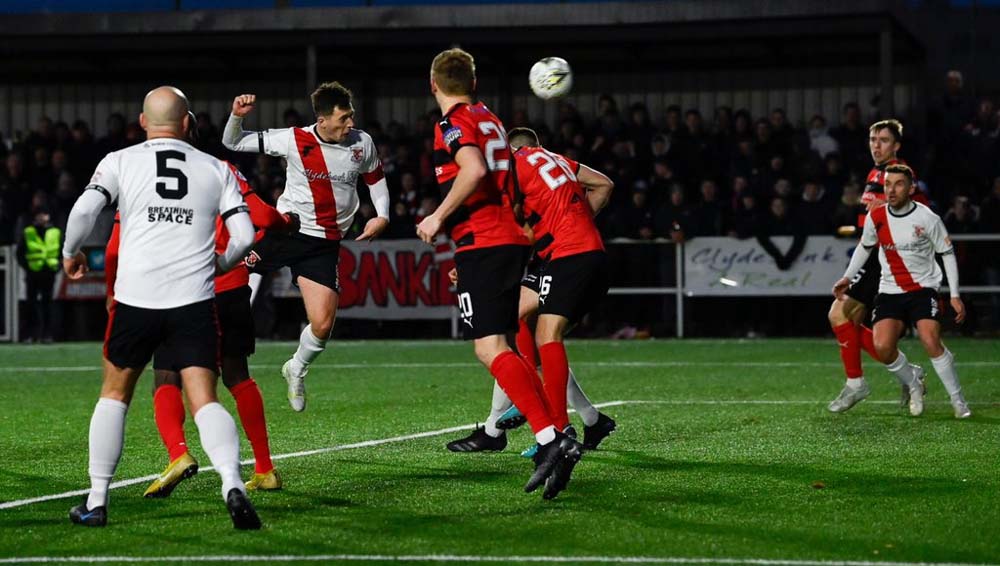 Clydebank stormed into the fourth round of the Scottish Cup with a simply stunning second half performance against League One strugglers Clyde. Despite three leagues of a difference between the clubs the Bankies ran out deserved winners and there could have been no complaints had the margin been greater.

With the players available the side picked by Gordon Moffat was probably the strongest line up possible. Ross McPherson did enough last week to start the match at the expense of Hamish McKinlay. The only notable absences from the squad altogether were Fraser Johnstone (Holiday) and Michael Bailey.

The anticipation for this match was huge, but strangely the crowd seemed quite subdued for much of the first half, and it was mainly singing from the Clyde end that could be heard. The fare on the pitch was decidedly mediocre and the Bankies were not giving their fans much to get their teeth into. It doesn’t help shooting into the unpopulated half of the ground.

Clyde were largely the better team in the first half, but didn’t threaten the Bankies goal too often, and had less verve than Elgin City did when they visited Holm Park in the last Round,

After an early shot from Ally Love from around 10 yards out that went about a yard wide of the post, it took another twenty minutes for a shot at goal from either side. This one came from a low near post corner that Nicholl flicked over the bar.

The Bankies defence looked quite competent in the opening period, particularly Hodge who seemed the most settled Bankies player on the pitch. Elsewhere, there were a lot of careless forward passes that were just not doing anything in particular for the home side.

Clyde had their best chance of the whole match after 28 minutes when a pass found Ross Cunningham down the right hand channel. He took everyone by surprise with his low diagonal shot that was hit with such ferocity that Donnelly was unable to move. Thankfully, the ball went past the far upright by millimetres.

Clyde lost Cuddihy to injury just after this, but strangely, Danny Lennon played with ten men for an extended period. This allowed Clydebank to get a wee foothold in the game and we started to see the emergence of Joe Slattery, who would go on to have an imperious second half.

As the game looked destined to head for the break goalless, the Bankies did the unthinkable and took the lead. Lee Gallacher took a free kick just right of centre about 40 yards out. The ball was not cleared properly and it found its way to Jamie Darroch on the edge of the box. Now, Big JD hit one of the most audacious overhead kicks I’ve ever seen at this same goal a few years ago, but he was so unlucky when it rattled off the crossbar. This time, the bar was his friend. He took the ball on his right foot and smashed it off the underside of the bar and into the net leaving Parry rooted to the spot.

This goal may ultimately have changed the game in the Bankies favour. It certainly broke the first half mediocrity. Most were expecting Clyde to come out all guns blazing in the second half, but it simply never happened. For a team with such talent that have played at a much higher level they were staggeringly disappointing, though Clydebank must deserve all the accolades for their part in making the game turn out as it did.

Shooting into the home end, with a now invigorated support on both sides of the ground, the Bankies completely took control. One shot, one goal in the first half turned into a one way procession. At times Clyde could hardly get the ball out of their own half.

Three minutes in, and McPherson cut in from the left, and curled the ball over the bar. Just after, Lee Gallacher showed great tenacity in barging his way into the box, but he sent a left foot shot just wide of the post.

As the pressure kept up, Parry had to dive to his right to punch away a Niven header from a Gallacher free kick. On the hour a fine break on the right saw Slattery find McGonigle who rolled the ball across for Nicky Little around 20 yards or so out, and he tried to place it with the side of his foot. Unfortunately the ball was just over the bar and skimmed the netting on the roof of the goal.

The second goal was coming and it was a beauty when it arrived. Lee Gallacher must be the best crosser of the ball at this level, and it was his free kick that found Nicky Little unmarked 8 yards from goal, and he directed a fantastic downward header into the goal to send Holm Park wild.

Clyde had no response at all, and it is hard to find a chance of note that could have turned the game into a nervy ending for the Bankies. Instead the Bankies could easily have scored a couple more.

Niven had a Header saved by Parry, and Darroch’s follow up was blocked. Lee Gallacher, now enjoying himself, had an effort that was blocked and spun out for a corner. And probably the best chance of all fell to Niven who was the recipient of a knock on from a Gallacher free kick, but he stretched and sent the ball over the bar.

There was a bit of a flashpoint in stoppage time when Love, made a petulant hack on McKinlay. This showed that he had lost the plot and couldn’t take the defeat that was being handed out, and he was rightly booked as was McKinlay who threw the ball at Love in retaliation.

Gordon Moffat said on the radio on the eve of the match that he needed 8 or 9 of his players to outdo themselves to get a result, however he got all fourteen of his players to do so. The first half wasn’t great to be fair, but Clyde never really assumed any kind of control that you would expect from a higher level team. The goal changed everything for me. The player’s confidence just grew immeasurably in the second half and was as good as anything we have seen this season, and the Bankies have had some great performances this term. It would be unfair to pick stand out players as everyone contributed, including the subs when they came on. It is right up there amongst some of the Bankies greatest Scottish Cup performances and will be remembered for a long time.

The Bankies have Troon at Holm Park on Friday night in the league and we fully expect to see another four figure attendance. I mean, what else could you possibly be doing!!