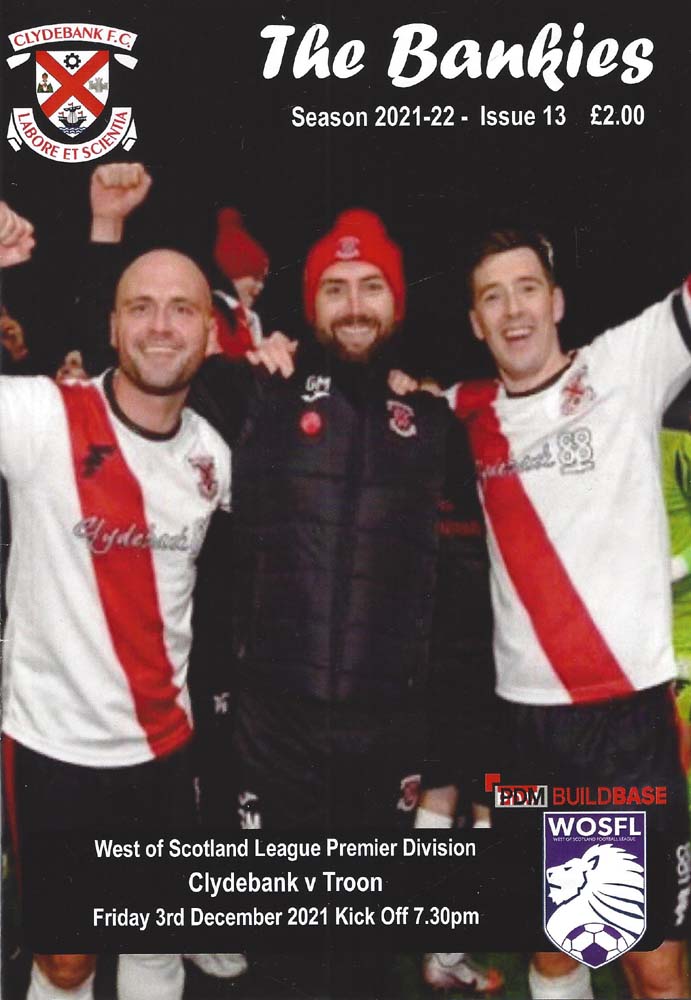 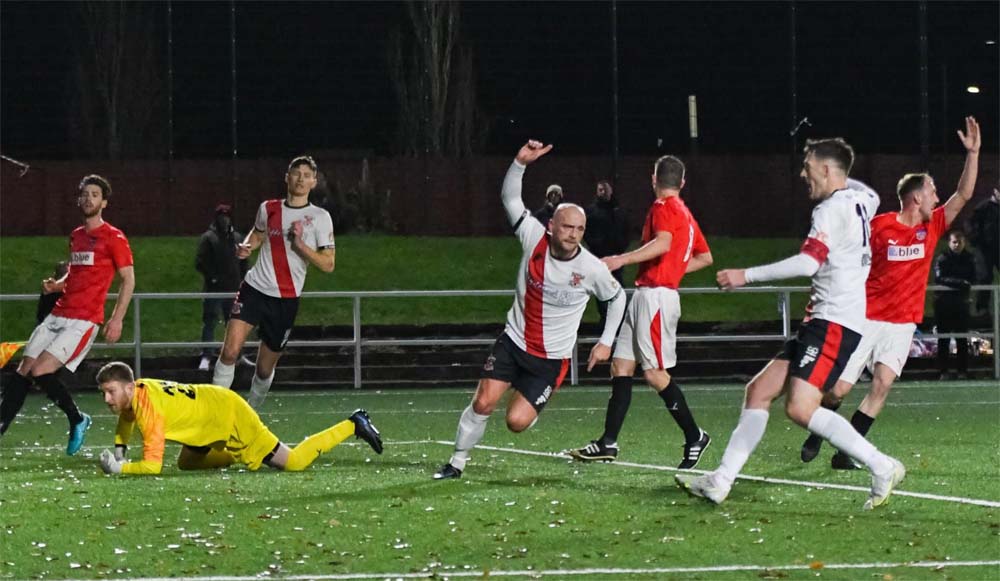 Clydebank needed another big second half performance to overcome Troon who threw everything and the metaphorical sink at the Bankies in the opening half an hour of this West of Scotland Premier League match. Troon set out to take advantage of any dip in the home side’s form after the high of knocking Clyde out of the Scottish Cup at the weekend and for a while they did just that taking an early lead in the process. The Bankies players will need to learn that with any success they earn, a big target comes along with it and other clubs will be even keener to take you down. Jamie Darroch equalised before the break just as the Bankies were creeping back into the match and two further second half goals in a much improved performance sealed the three points.

The Bankies are entering a period in the next two months where all the league opposition are outside the top six and to have any chance of catching Auchinleck and Pollok it looks like maximum points, or very close to it, are going to be required. With that in mind, Gordon Moffat went with the same eleven from the Scottish Cup to try and keep the momentum going.

However, it was Troon who made the fast start. The Ayrshire side were doing everything at breakneck speed. They were chasing every ball down not allowing the Bankies any time at all to settle. Their forwards were buzzing about, and it was as energetic a start we’ve seen from any opposition this season. It has to be said that they were aided by a Clydebank side who could not string two passes together. The slackness was something to behold, and something we haven’t seen too often or this bad since Moffat became manager.

Troon were quickly rewarded for their efforts after just five minutes when Jamieson zipped the ball low across the box from the left hand side. The pass found Montgomerie around 16 yards out, who steadied himself and drilled the ball past Donnelly and a despairing lunge by Byrne.

The visitors kept up this incredible pace and you had to ask yourself whether they could keep it up. Maybe had they got a second goal then they could have taken it down a notch but that goal never came with a Montgomerie header and Black shot, both of which went off target, were as close as they came.

As time wore on, Clydebank were slowly edging their way into the game but were being let down by a lot of poor passing. It took 33 minutes before the Bankies had a shot a goal, which was a long range effort from Slattery that deflected out for a corner.

Just five minutes later, the Bankies drew level with the simplest of goals. A free kick from the left just inside the Troon half was flighted into the box by Gallacher. Jamie Darroch was allowed to run onto the ball completely unmarked to guide it beyond Fisher with the side of his foot. It was a disappointing goal to lose for the visitors who saw their huge effort and advantage wiped out in a split second.

After the restart, Troon tried to assert themselves with the same vigour as they did in the first half. However, the energy just wasn’t at the same level, and despite their forwards always carrying a threat, Clydebank were starting to look like a much more composed outfit.

With 50 minutes on the clock, the Bankies came close with a free kick after a foul on McGonigle. Lee Gallacher took the free, and was unlucky as is shot went just over the bar grazing the netting on its way over.

From this point on Clydebank were the more threatening of the two sides. One minute later Gallacher had another pop at goal but was well off target, then the passing was finally put together with a quite fantastic move which ended with Ross McPherson just inches away from the ball, and ending up in the net himself, from a Black cross.

Clydebank were deserving of their goal when they took the lead for the first time in the match after an hour. It would be an understatement to say it was a lucky goal. A short corner was taken and Slattery drove across the edge of the box and laid the ball off to Chris Black who completely miskicked it straight into the path of McGonigle on the right hand side. His initial cross was blocked, but he bravely headed the ball back into the danger area and it was half cleared to Nicky Little. The forward drove the ball off the upright and ricocheted off the back of keeper Fisher who was now splayed on the ground and into the net.

Clydebank were on top now and chances from Gallacher and substitute Lynass came and went. Troon’s front pairing of Vernon and Jamieson were still troublesome, however and the former made a great cross field run and laid the ball off for Boyd, who brought out a fantastic save from Donnelly low on his left hand side.

A third goal was going to be needed to make sure of the points and it arrived with just eight minutes left. McKinlay crossed from the right, but it deflected off a defender and looped up into the air. Nicky Little was the quickest to react and met the ball at the near post with a cute header and nodded it past Fisher.

With the game won, The Bankies had chances to add to their lead, but it would have been hard on Troon to have suffered a hammering, and it ended 3-1.