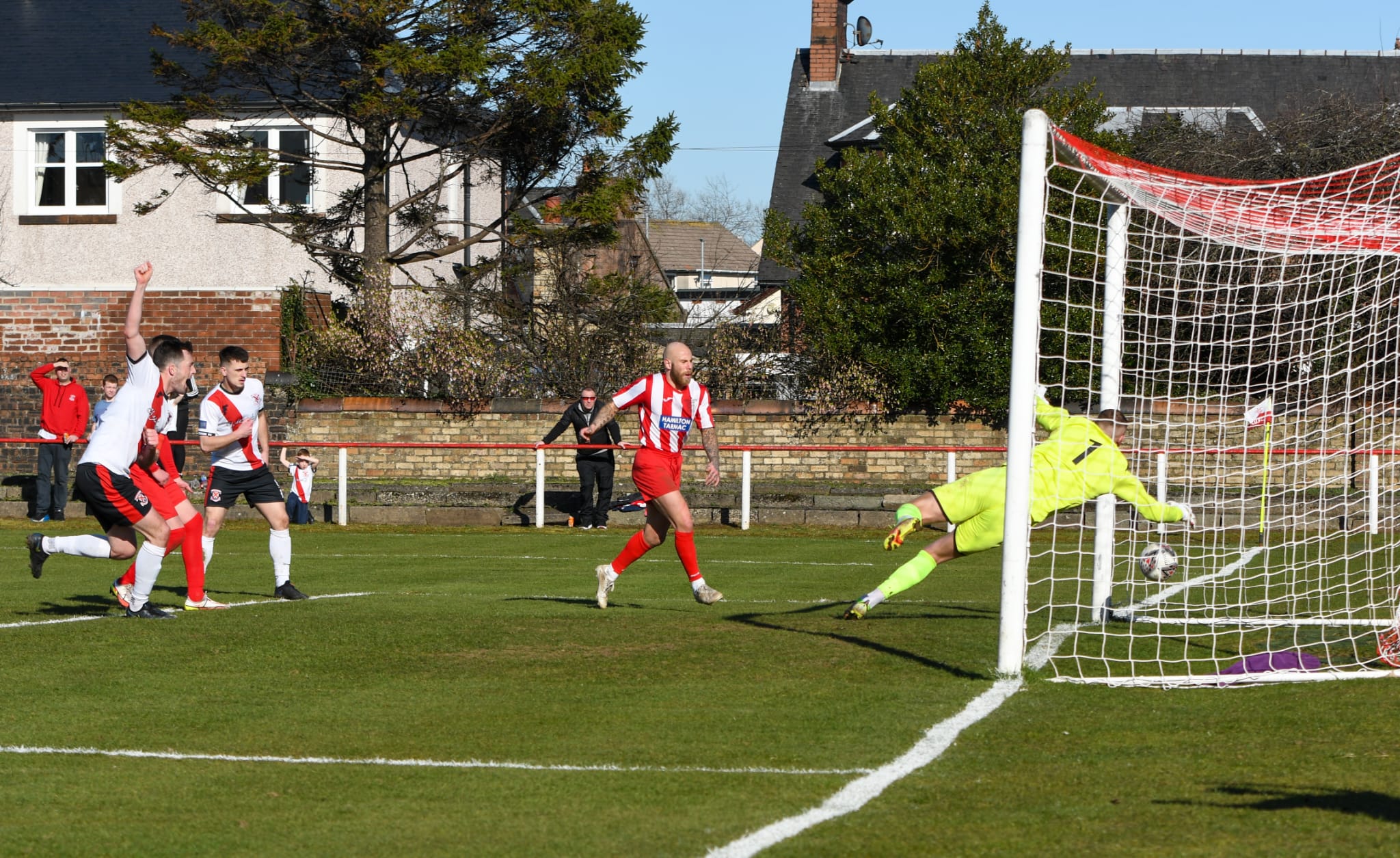 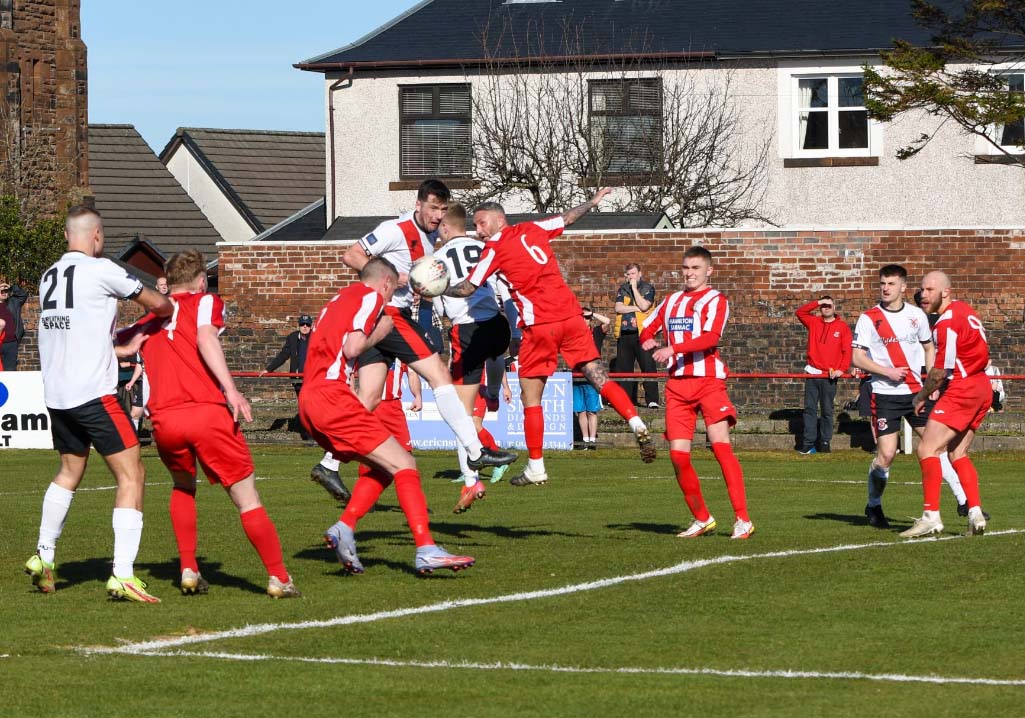 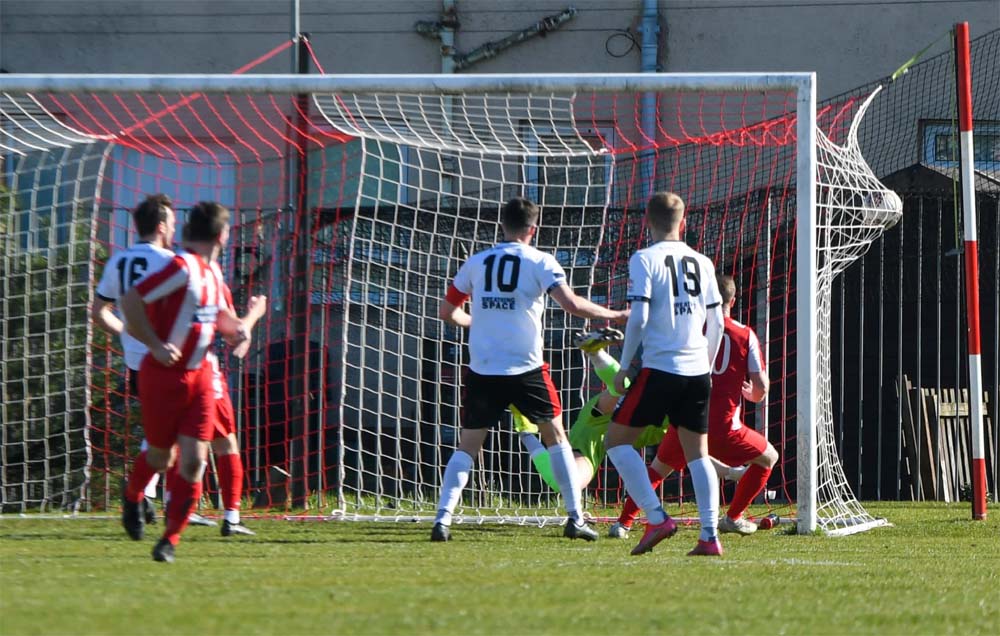 Will Graham’s superbly struck shot just five minutes from time was enough to give Hurlford all three points in a tight league match at Blair Park. Hurlford are the first club to complete a double over the Bankies in the league this season, and it continues the woeful record on this pitch. Since winning their first two games at Blair Park, Clydebank have failed to win in the last seven stretching back to 2011. It was also a huge opportunity missed to reignite the dying embers of the title challenge as the top two, Pollok and Auchinleck, both lost.

There were just a couple of changes to the starting line up with Joe Slattery, and Liam McGonigle starting in place of Ross McPherson and Frazer Johnstone. Oisin McHugh continued his recent run in the team at the expense of Paul Byrne.

Despite Clydebank having the wind in their favour, Hurlford were overall the better team in the first half. There was a spell in the middle when the Bankies came into it but, Hurlford, as ever, are a strong side and they re-asserted themselves as the game wore on.

The home team opened brightly and the first real chance came after ten minutes when Marc McKenzie was put through on goal. Bankies keeper Stevenson narrowed the angle well, and managed to deflect the shot away for a corner kick.

Slowly the Bankies edged their way into the game and Mulcahy had the ball in the net when he lobbed McDonald, but the linesman had already flagged for offside.

The Bankies forced a couple of corners, but had yet to give the Hurlford defence any real moments of worry. Likewise, Hurlford were being well contained by the Bankies defence, though they did manage a couple of long range efforts. One in particular from Paul McKenzie which had Stevenson well beaten, but the ball sailed narrowly wide of the post.

The Bankies suffered a double blow just after the half hour when firstly Jamie Darroch had to be substituted due to picking up a knock. Then just two minutes later they were a goal behind. A free kick from the right was crossed into the near post area, where Paul McKenzie had floated away from his marker. He directed his header towards the top corner, and despite getting a good hand on the ball Stevenson couldn’t keep the ball out.

The Bankies finally had a first real good sight of goal four minutes later. In a similar situation to Hurlford’s goal, Lee Gallacher sent in a free kick into the box from the right, and Ciaran Mulcahy timed his run perfectly, however he made a mess of his header sending it several yards off target.

Both teams had a chance prior to the interval. Hurlford were first up with a quick free kick down the right wing. Graham raced towards the bye line and sent in a cross for McCaw, but luckily his shot hit Chris black on the side and went out for a corner. Down at the other end the Hurlford defence got itself in a right fankle when there was no danger, and somehow put McGonigle through on goal, but the winger proceeded to also get himself in a tangle and with a defender in attendance the chance was wasted.

The second half was a much more even affair, as the Bankies made a tactical change by pushing Munro out wide, and bringing Gallacher inside to support Mulcahy.

With ten minutes of the second half gone, Clydebank began to make some in-roads towards the Hurlford goal. Chris Black came close with a 25 yard pile driver after a neat Gallacher lay off, the ball missing by inches.

Just a couple of minutes later, the Bankies got back on level terms and it was a goal of great fortune. Gallacher sent in a free kick from the left, and the ball went over the head of a ruck of players who all missed it. Just behind was defender Chris Robertson who could not get out of the way in time, and the ball ricocheted off his body and flew into the corner beyond the despairing dive of McDonald.

The Bankies were the better team at this stage and could have taken the lead shortly afterwards. The ball was played through for Lee Gallacher at the edge of the penalty box. The credit here has to go to the keeper for coming off his line so quickly, as Gallacher looked to lob him. He had to get a fair bit of elevation on the ball to make sure it got over McDonald. This gave Robertson enough time to race back, and hook the ball away before it crossed the line.

The better chances continued to come for the Bankies. Mulcahy hit the side net with a shot on the turn, then Munro sent in a low shot which was just wide of the target. Clydebank looked the more likely and with eight minutes to go the best chance fell for Nicky Little. After a bit of pinball in the box, the ball fell loose in the box. Little was first to it and sent in a rasping drive, but it was straight at McDonald who managed to beat it away.

Clydebank’s failure to score a second goal was to be punished just three minutes later. Kyle Munro will be disappointed as he gave the ball away deep in his own half. This allowed Whittaker to have a shot at goal, but it was blocked and the ball rolled out invitingly for Will Graham. He cracked the ball first time from around 25 yards out. The ball stayed low and bent away and back in towards the goal and flew into the bottom corner giving Stevenson no chance. It was a top quality strike and a worthy match winner.

With time running out, the Bankies threw men forward and twice were caught on the break and only carelessness from the forwards stopped Hurlford from claiming a third. The Bankies finished with a corner of their own but nothing came of it.

Similar to last weeks match against Kilwinning, this was a close thing with not a lot between the sides. Hurlford are probably a more physical side, and as such there wasn’t a lot of good passing on display, just a lot of long balls, which the Bankies were equally guilty of. Hurlford had only won one of their last seven matches, so from that point of view it was a disappointing defeat. It is clear that the Bankies need a bit more physicality in the middle of park. Even though results have been positive recently, the Bankies have been dominated in midfield by most teams, and need one or two players in that area of the park with a more competitive edge. Also, Ciaran Mulcahy needs someone alongside him who can pick up the scraps he earns. It is incredible how often he wins the ball in the air, but not enough is coming from those around him.

The Bankies now have two home games in a row with Beith, then Rutherglen visiting Holm Park