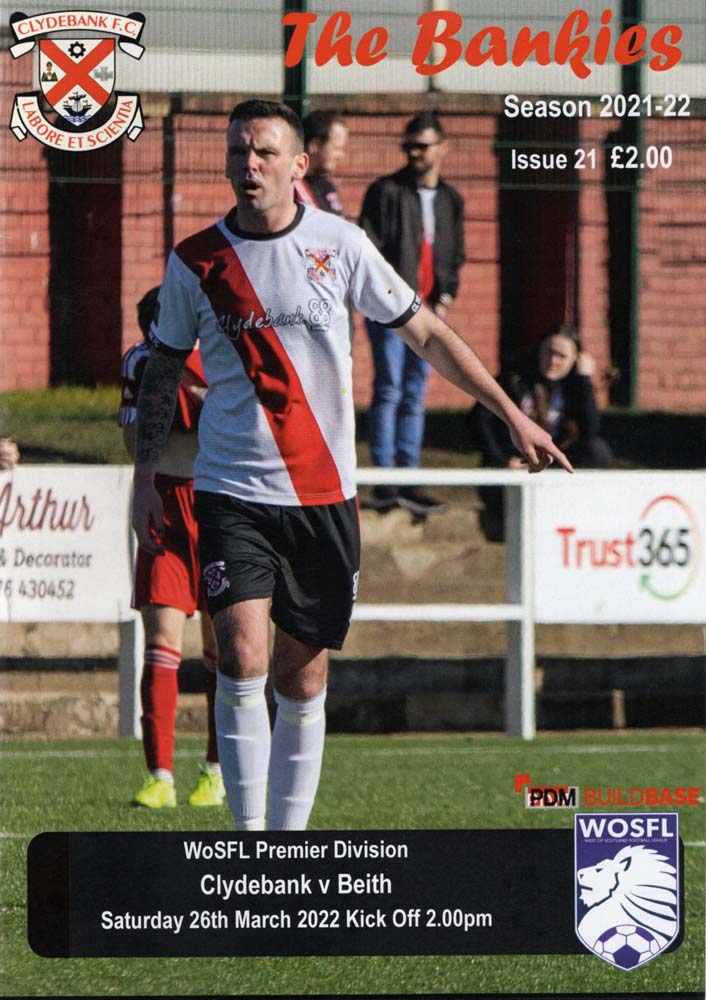 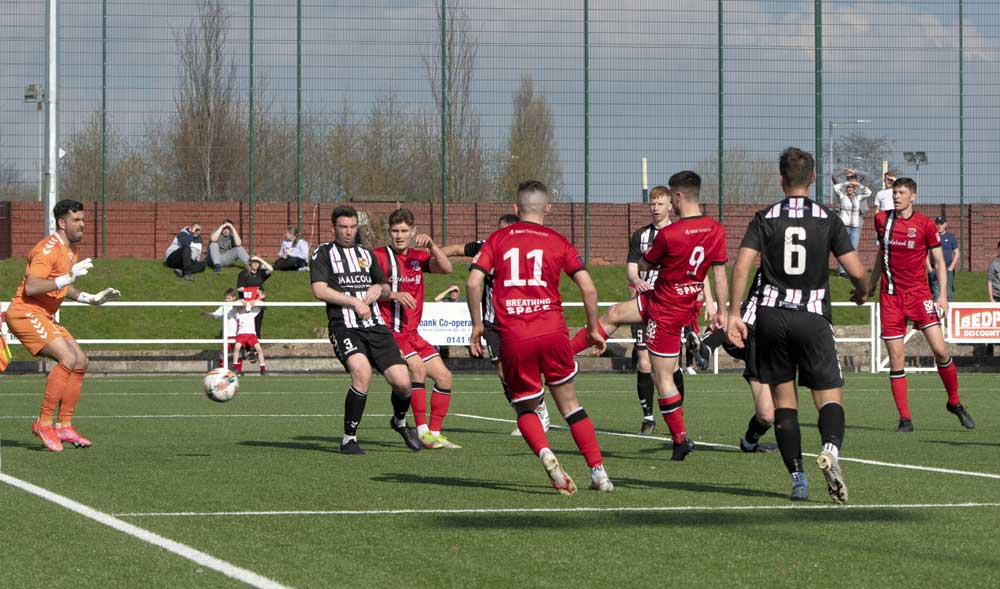 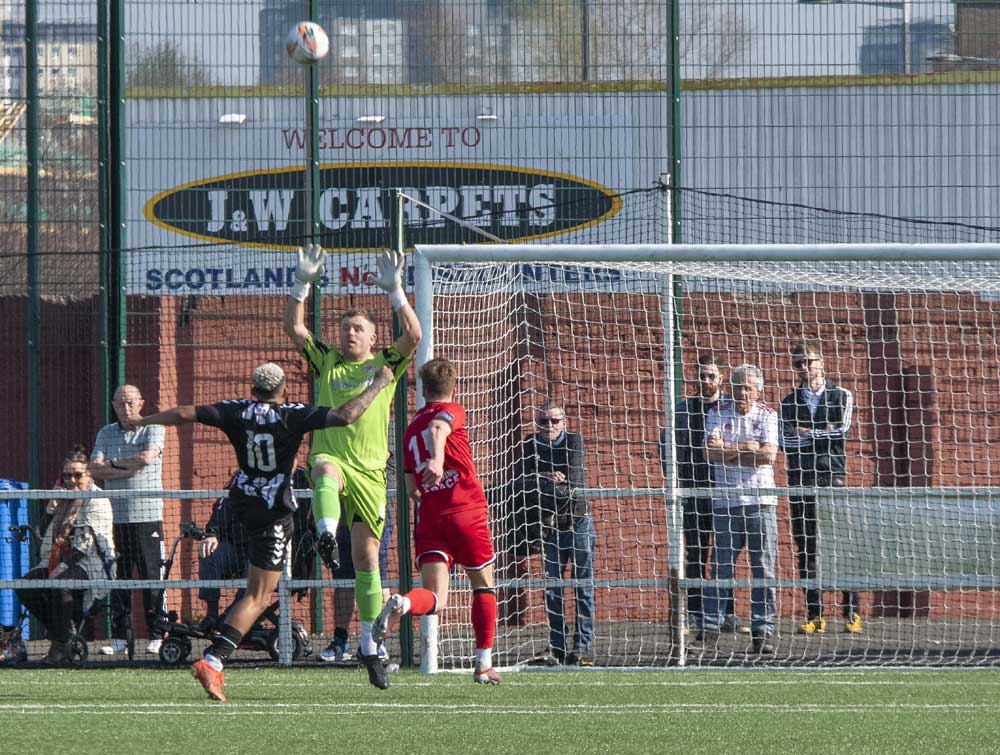 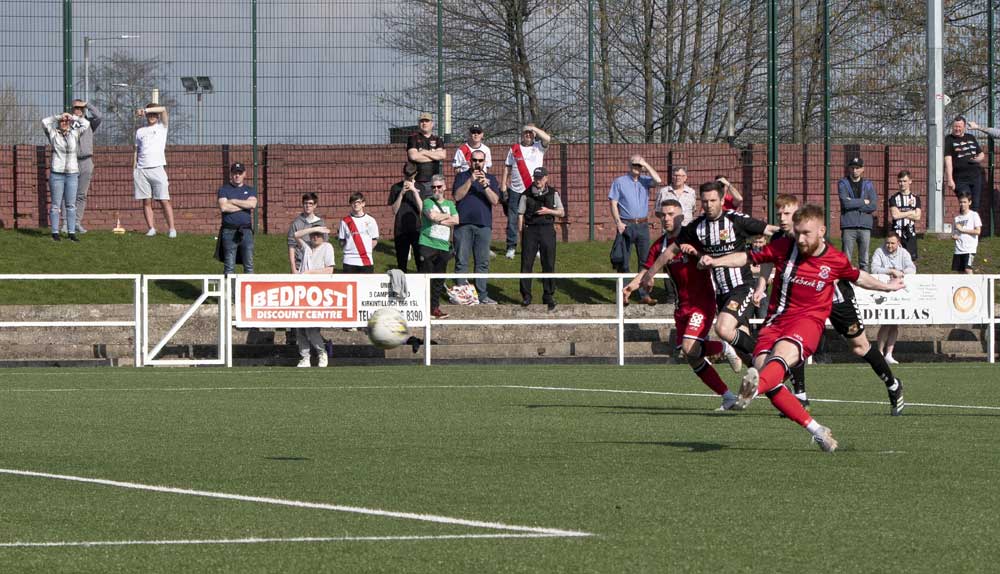 Clydebank’s failure to convert goal scoring opportunities was the chief reason for dropping two points at home to Beith in this West of Scotland Premier League clash at Holm Park. In an open, entertaining match with two evenly matched sides on a warm spring day, the Bankies were to rue their missed chances as they allowed the visitors to go home with a one all draw.

The last couple of games has brought into focus one of the main areas that the Bankies have to improve upon next season if a title challenge is a serious prospect. Clydebank’s goal-scoring record is the lowest in the top five, and the propensity for giving away cheap goals means that we also have the worst defensive record.

Three points were shipped at Hurlford last week as we couldn’t find a goal when we were on top, and the 1-0 victory at Kilwinning was more nervy that it ought to have been for the same reason. Against Beith today, the Bankies had more than enough chances to take the three points, but found themselves a goal down after 21 minutes with a real sloppy goal.

The ball was fired route over the top of McHugh and Niven. Indecisiveness allowed Fowler to lift the ball over the advancing keeper Donnelly. McHugh almost made it back but only succeeded in heading the ball into his own net.

Clydebank’s response was immediate, when Ciaran Mulcahy lashed the ball home from six yards out, following a fortunate ricochet in the box from a corner when the ball landed right at his feet.

The Bankies litany of misses started in the eighth minute when they were awarded a penalty kick when a McGonigle shot came off the outstretched arm of O'Neill in the box. In the absence of Nicky Little, if fell to Lee Gallacher to take the spot kick. He hit it well enough toward the goalkeeper’s right hand corner, but it was at a good height for Burgess, and he saved well.

The Bankies did most of the pressing, and Gallacher forced a fine save from Burgess when he went on a mazy run and unleashed a thunderbolt from 25 yards after 12 minutes.

After the goal, Beith had a decent chance when former Bankie Del Hepburn went on a run taking on McHugh and beating him, but his neat reverse shot was palmed away by Donnelly.

Dale Burgess was to have another quite superb save when a diagonal ball into the box found Chris Black in the right hand channel. He allowed the ball to run across his body and he sent in a tremendous diagonal shot, which was turned over the bar one handed by the away keeper.

Just on the interval McLean missed the biggest sitter of the game. Niven was dispossessed by Fowler after a poor Black throw-in. Fowler ran down the left wing and centred the ball for McLean. The veteran striker made a complete hash of his attempt to get the ball as he completely mis-kicked with the whole goal to aim for.

The best of the second half chances all fell to the Bankies. On the hour Mulcahy won a header and then worked a quick one two. He then rolled the ball in front of goal for Gallacher but he just didn’t show enough conviction to meet it and the chance was gone.

Minutes later, Munro played a fantastic ball into the open space for McKinlay to run clean in on goal. Unfortunately the Bankies forward never quite took the ball in his stride – which he should have – and this allowed two Beith defenders to take him wide of the goal. McKinlay did still manage a shot at goal but the angle was difficult and he hit the side netting.

With 18 minutes remaining the Bankies should have taken the lead when a cross from Chris black on the right took out the Beith defence. Liam McGonigle controlled the ball superbly, and from six yards out a goal seemed a certainty, but his blasted shot went wide of the target. It looked to almost all the players that Burgess had made another stunning save, but the ref award a goal kick much to the Bankies annoyance.

With time running out Nicky Little, who had come off the bench, had a fine effort at goal. Controlling a throw-in to his feet, he turned his marker and shot from just outside the box, but the ball went wide of the target.

The Bankies were to finish the game with a huge let off, showing what can happen when you don’t score in games you dominate. Donnelly fluffed a kick out that went out for a throw-in. From here the ball was crossed from the right and McBride, rattled the ball off the frame of the goal, and both teams had to settle for a point.

Last week, Bankies manager Gordon Moffat rued missed chances at Hurlford and this week was the same story. He suggested that the margins are fine at this level, and that indeed is the difference to where we are in the league to where we could have been. The challenge for the management team has never been greater for next term. With the league going down to 16 clubs, there will be few easy games, and some of the larger clubs are already signalling their intent by making new signings now. This will easily be the most crucial round of recruitment in Moffat’s tenure at the club, and he can’t afford to have many failures.

Next week the Bankies are at home again to Rutherglen Glencairn. The Glens are not safe from relegation yet, so we can expect a real scrap against a side that badly need the points