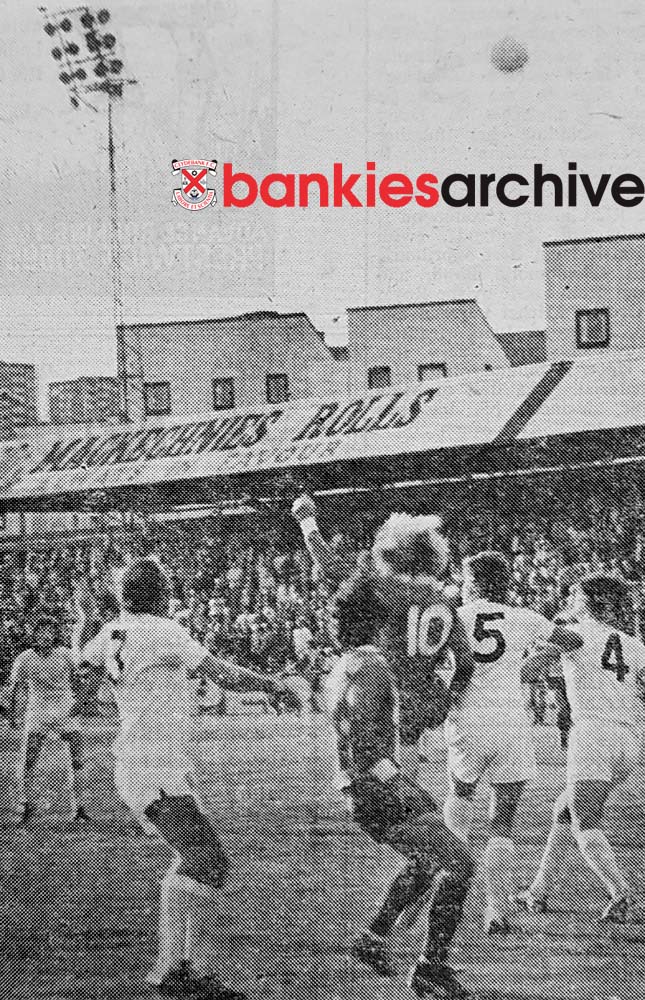 A scrambled goal in the 82nd minute by Ayr striker McCulloch was enough to take the seasiders through to the next round of this appendix tournament. The opening spell belonged to the Bankies, with Cooper taking up where the great Stanley Matthews left off, running round the visiting players like a starved whippet.

But, one had the feeling that although Cooper is a wonderful player he perhaps holds on to the ball just that wee bit too long.

Ayr began to come back into the game and Gallagher passed with flying colours when he pulled off a magnificent save from a Murphy thunderbolt.

Then, after a quarter of an hour, the homesters suffered a real fleshwound when Norrie Hall was dismissed after he had lashed out at Ayr starlet Robertson, who had obviously taunted him. Originally, referee Kyle had just showed Hall the yellow card, but the player wanted to debate the situation and this he did, using a poor choice of words, and was rightly given his marching orders.

Bankies recovered admirably from this and McCallan almost scored from six yards, but he horribly hooked the ball round the post.

Robertson, of Ayr, was booked for kicking the ball away after the whistle had blown for offside and this seemed to be the signal for an influx of niggling, and vicious fouling from both sides.

Robertson always looked dangerous when he had the ball and Ayr could quite conceivably have taken the lead before the interval.

Clydebank started the second period at a furious pace. Again Cooper appeared to be the man who could decide the game with a flash of his brilliance.

Larnach never really looked the part and so he was substituted by old favourite Alan Munro.

Immediately he appeared to inject some life into the Bankies. Everything seemed to be that bit more urgent, and this sense of urgency almost paid off when Munro himself almost headed a fine goal.

With 15 minutes to go, tension began to creep in. The players were getting impatient and they had obvious thoughts of having to play a further half an hour and then possibly of taking part in the penalty decider.

Anyway, unfortunately for the Bankies, McCulloch had the answer to these thoughts. Not the end of the world for Clydebank. In fact, maybe they are better away from this tournament, as the fixture list may have become too crowded.

Tomorrow the Bankies travel up to Alloa, where they face the locals in the first game of the League Cup. They did well in the competition last season, losing eventually in the quarter-finals to Partick Thistle.

Any chance Clydebank had of going one better than their no-scoring draw at Somerset Park in the first leg vanished after only 17 minutes play in last night's second leg of the Anglo-Scottish Cup-tie at New Kilbowie Park when Hall, their right back, was ordered off.

The full back was involved in an incident with Robert son, the Ayr left winger.

Ayr took full advantage, and Fleming headed a Robertson cross against the post.

Robertson had his name taken in the 34th minute for kicking the ball away after being penalised for being offside.
Tait, the Ayr pivot, sustained an ankle knock and was replaced by McDonald at the start of the second half.

Munro replaced Larnach in the 63rd minute, and Sproat had his name taken in the 75th minute for throwing the ball at Munro's head.

McColl had vile luck for Clydebank two minutes later when he lashed a Munro cross against the upright.

Ayr grabbed the winning goal in the 83rd minute. McCulloch took a free kick and Fleming headed on to Phillips, who shot against the bar. McCulloch, following up, gave Gallagher no chance from the rebound.