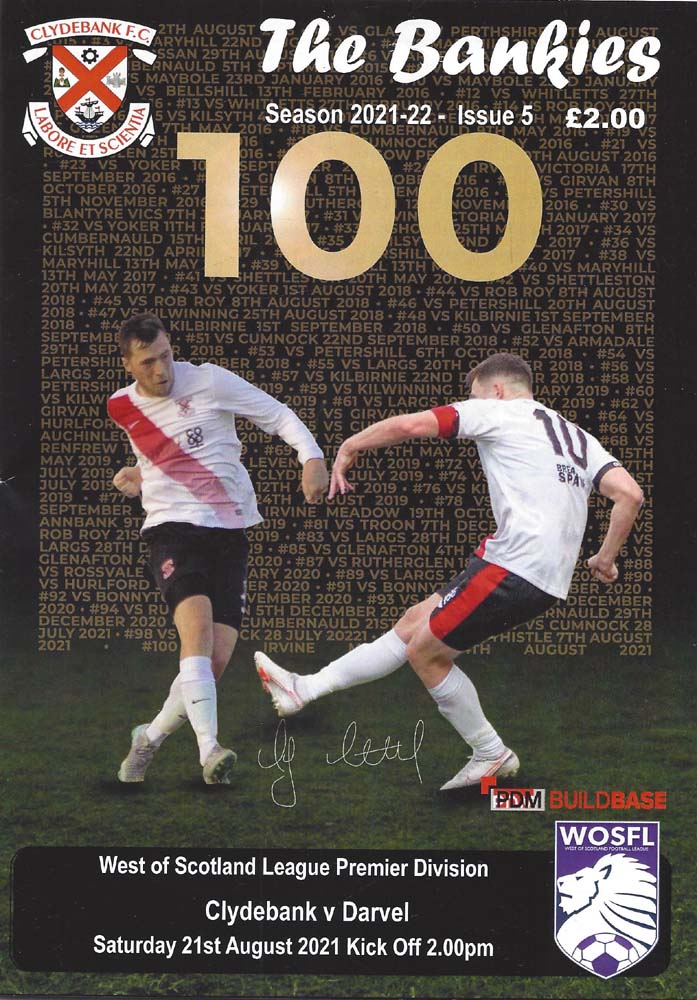 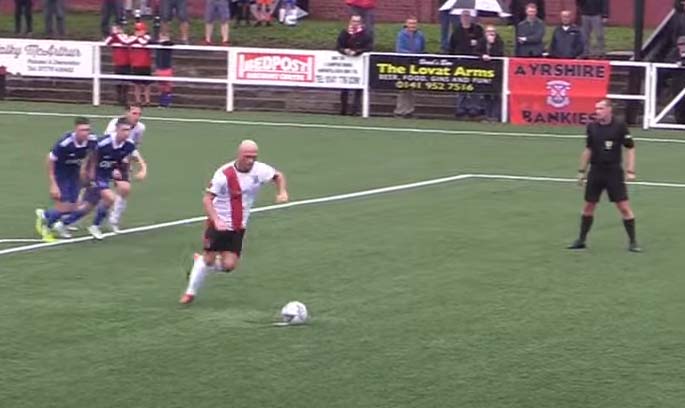 There were euphoric scenes at Holm Park as Jamie Darroch’s injury time penalty rescued a point against Darvel when the Bankies looked dead and buried. The last gasp equaliser must have felt like a defeat for the visitors who were head and shoulders above the Bankies for long periods in the match, and maybe if they had gone for the kill instead of sitting back on their two goal lead the outcome may have been much different.

Clydebank fans didn’t have their troubles to seek as they arrived at the ground to hear that talismanic striker Nicky Little was missing due to injury, as was Ciaran Mulcahy. This meant that a clearly unfit Ross McPherson had to deputise as centre forward. Problems elsewhere meant that the Bankies employed three central defenders quite possibly for the first time in Gordon Moffat’s tenure and it was a gamble that didn’t pay off.

This was not the ideal game to be trying a new formation, and it became evident fairly quickly that some of the players didn’t know what they were doing. Darvel threatened to blow the Bankies away early on, and it was only when Moffat reverted back to the usual system that the set up looked more stable, though normal right back Michael Bailey had to slot in on the left hand side.

In the first ten minutes, Darvel had a few decent chances to open the scoring and Clydebank had to thank Donnelly for saving full length from Thomson on his left hand side, then McShane came close with an effort from the edge of the box that went through a ruck of player’s legs.

Clydebank tried to respond down the other end when Gallacher skipped by a couple of challenges, but his left footed effort was weak and easily saved by Truesdale. The Bankies difficulty with the new formation was compounded with three early bookings to Bailey, Green and Black.

Once the Bankies reverted to the more familiar set up they were much more stable, but were sitting extremely deep as Darvel continued to dominate possession. It has to be said that the Bankies defence were outstanding as they had to contend with a lot in the first half, and barring a couple of off target free kicks they started to restrict The Ayrshire outfit’s opportunities.

The Bankies needed half time to come as getting in goalless would have been a huge accomplishment at this point. Alas, they were to fall behind in the final minute of the half with an unlucky goal. The ball was pulled back from the left wing to McShane, but his mis-guided effort came off the foot of Bailey and sent Donnelly the wrong way.

Clydebank’s luck continued to desert them when keeper Donnelly and McPherson both had to be replaced due to injury at the interval with Stevenson and McKinlay replacing them for the second period.

Darvel looked to kill the game off early in the second half as Bankies replacement goalkeeper Jamie Stevenson was called into action within a couple of minutes when he had to be down sharp to a Miller shot, and did well to hold the ball with a Darvel forward in attendance waiting for a spill.

After this Clydebank had their best spell of the match forcing corners and free kicks around the box, with a Green header and a Hodge volley finally threatening the Darvel goal. Hodge had only just come on as the Bankies injury woes got worse as Matt Niven suffered another head knock and had to go off.

This good period for the Bankies was ended when Darvel grabbed their second goal after 64 minutes when a cross to the back post found Stirling unmarked to head past Stevenson. It’s hard to be too critical of the young keeper but it looked like a cross that a more experienced keeper would have claimed.

The wind was knocked out of the Bankies sails, and the fear was that Darvel would kick on and punish a deflated Clydebank side. However, the visitors seemed to content to hold on to what they had and to be fair for the next ten minutes they appeared to have everything under control.

Then, with nine minutes to go the Bankies grabbed a lifeline when Jamie Darroch pulled one back. Holmes was chopped down on the edge of the box and took the free kick himself. His shot struck the wall and came out to Darroch at the edge of the box and he thundered the ball off the underside of the bar, over the line and up into the roof of the net.

Buoyed by this the Bankies really exerted themselves properly for the first time in the match, and mistakes were creeping into Darvel’s game that weren’t evident earlier. It looked like it was going to be of no avail, until the third minute of stoppage time when a long throw by Holmes deceived the Darvel defence and bounced up and struck a defender on the arm.

It was an unfortunate award against the visitors, but the ref had no option but to give the spot kick. Jamie Darroch is a man who leads by example and he strode up confidently and thrashed it past Truesdale for an unlikely equaliser.

The Bankies were clearly handicapped by injuries before and during the game, and found it hard going against a very experienced and for this level high quality Darvel team. The players had to dig deep to get this result, and the defence to a man were superb throughout. A special word for Michael Bailey who had to play at left back for most of the game, he has hardly put a foot wrong this season and he has been worthy of his place in the starting line up. We are maybe just lacking a wee bit of something going forward against the top teams, but there is a lot of character in this side and it showed again today.

Thankfully, the midweek games have come to an end for the players sake, and next Saturday it is down at bottom of the table Bonnyton Thistle. The players should be forewarned to look at what happened to the Bankies back in 1993 when they won their first seven league games only to be undone against bottom side Brechin City.