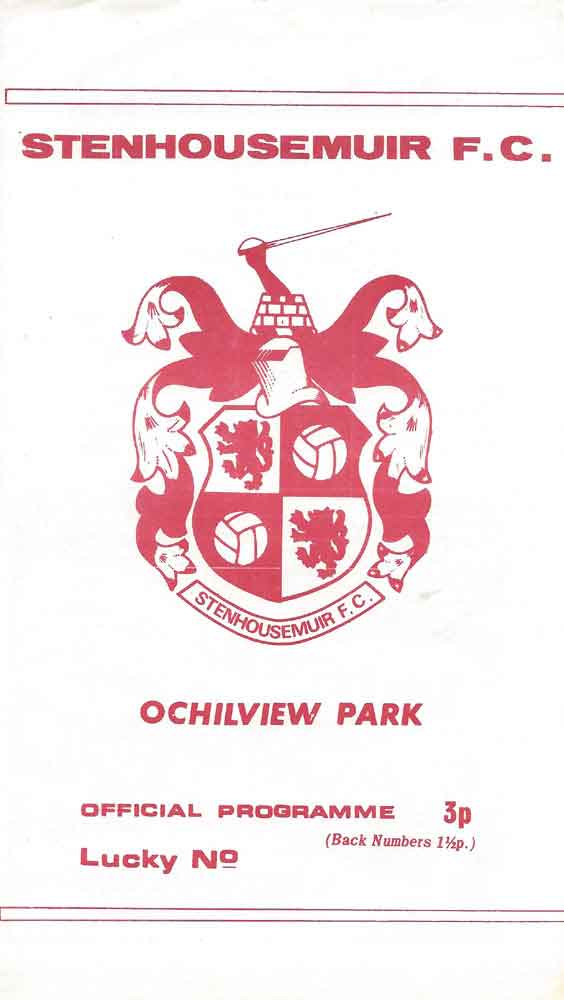 Bankies had one enforced change for their visit to Stenhousemuir. Jimmy Caskie missed out through injury and Ian Browning was drafted into a re-arranged forward line, for his long awaited debut.

The new formation, however, failed to hit it off, and Bankies slumped to their third defeat in five matches. They never got it together against a strong, eager home side who played themselves to a standstill, and in the probably deserved both points.

Clydebank, with Larnach on the right and cooper at outside left, despite jersey number, started well enough and had most of the play, but they failed to make any real impression.

Dunlop dealt capably with the many long balls that were played into the area, and with Ruddy and Sage buttoning up the middle, chances were few and far between. A good chance did fall to Browning, but he completely mis-kicked and the opportunity was lost.

The Warriors were content to hold back, and always appeared to have extra men around. However, they shook the league leaders in the 30th minute, when, with their first serious attack they went ahead.

Simpson picked up a loose ball, played a one-two with Scott, and gleefully shot past the helpless McKenzie for a splendid goal.

Bankies defence looked around accusingly at each other, but five minutes later they were spreadeagled again after Junior had fired a 30 yard drive narrowly wide, the rampant homesters went two up.

Gordon lobbed the ball into the area and, as Simpson raced in, it looked like a goalkeeper's ball. Somehow the defence was in a shambles and despite stumbling over the ball the winger still had time to push the ball home from a few yards range. A disaster for McKenzie and company.

Bankies were stunned into action and Cooper burst into the match for the first time. A good run took him into the area, but his final shot was wide.

Bankies found themselves two goals down in a league match for the first time in many a long day and faced an uphill task in the second half. They lined up with Jim Lumsden replacing Mike Larnach, Davie Cooper returning to his right wing berth.

They had the initiative and on the hour mark a peculiar goal put them right back in the game.

A beautiful ball from Billy McColl found Davie Cooper in space and he made ground up the wing, beat Sage and floated the ball over. Dunlop was as surprised as anyone when the ball dipped behind him and landed in the corner of the net.

This stroke of fortune should have set Bankies up for a stormy finish, but it was Muir who had a golden chance to tie the game up five minutes later. Simpson, a constant threat dispossessed Goodwin out on the right and raced in on the exposed McKenzie

As the keeper came to challenge , the winger placed the ball in front of Wright, who shot for the empty net only to see Norrie Hall miraculously turn the ball over the bar.

The homesters time wasting tactics, which had been apparent from the start of the second period, became blatant now as time ran out for Bankies and the frustration began to show.

After Norrie Hall had headed narrowly over from a good Ian Browning cross, the game exploded in the final minutes. Halliday, who had been niggling away all afternoon, appeared to strike Jim Lumsden whose retaliatory punch knocked the home player to the ground.

After consulting his linesman, referee Thomson rightly sent Lumsden to the dressing room, but incredibly, no action was taken on Halliday.

In fact he was helped off the field,but if the linesman was in a position to advise the referee that Lumsden should go he must have also suggested the same fate for Halliday. After all, the blood on Lumsden's face did not come from a self-inflicted wound.

So it was a dreadful end to an instantly forgettable afternoon for Bankies. They had no answer to a solid defence in which ex-Bankie Dennis Ruddy ans particularly Sage were outstanding. Muir obviously raided their performance, and their grit and determination probably deserved both points in the end.

Their recent slump leaves Bankies just two points ahead of Raith, and three ahead of Alloa, who have one and two games in hand respectively.

To add to their problems, they are on perilous ground when they next travel to Hampden to face the revamped Queens Park, the form team in the division at the moment.

The national stadium is not a happy hunting ground for Bankies and they will have pull out all the stops to come home with two points.