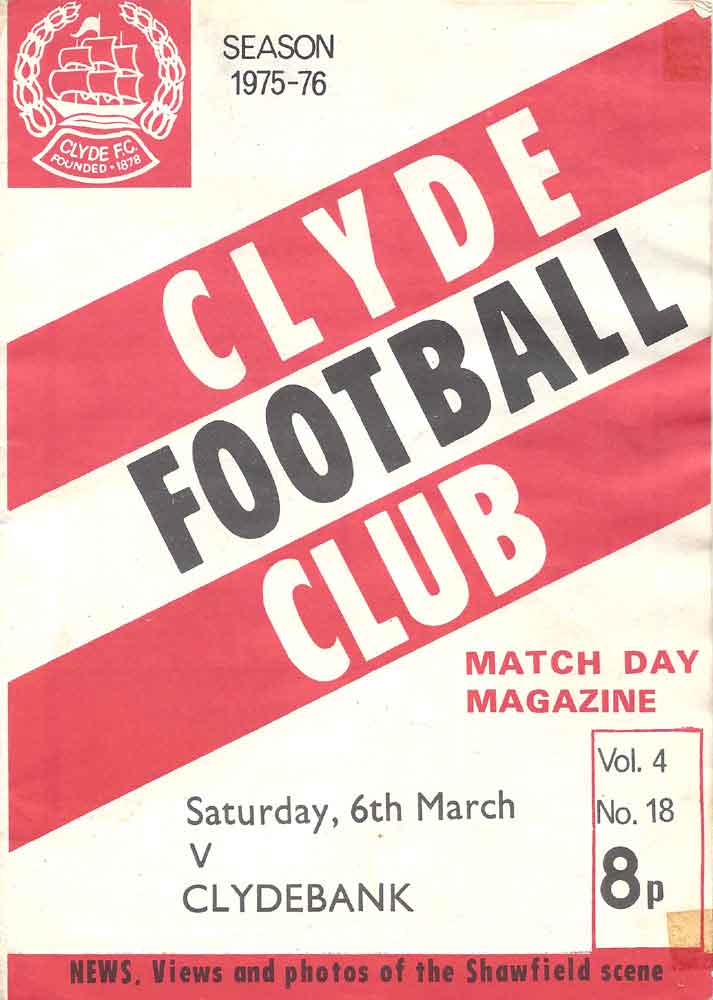 After the celebrations of last week, Bankies turned on a champagne performance and, led by the sparkling Davie Cooper they dumped Clyde to get the new Spring Cup off to a great start.

Bankies were unchanged from last week but on losing the toss,they faced a strong wind and blazing sun, as well as a Clyde team still smarting from relegation and determined to do well in the new competition.

The opening minutes saw the home side using the conditions to their advantage by relentlessly lobbing high balls into the penalty area.

From one such move they forced a corner in the 10th minute Ahern's kick was headed on by Hamilton and the usually dependable defence seemed to be caught napping as the unmarked Hood Scrambled the ball home from six yards.

This was to be about the last time that Clyde threatened for from then on Bankies took command. Playing relaxed tension-free football, the built up waves of attacks that hd the home side under pressure. There was no way that Clyde could match Bankies in football ability as they pushed the ball about to great effect and goals had to come.

And come they did, for after Davie Cooper had almost broken the bar with a thundering 30 yard free kick, the inevitable equaliser arrived. In the 28th minute, Boyd pulled down McCallan some 25 yards out and, when Jim Lumsden's kick floated over, Joe out-jumped the home defence to head the ball down into the path of the in-rushing Davie Cooper.His left foot duly crashed the ball into the net in fine style.

Bankies golden boy was obviously in the mood and brilliant skills took him past two defenders in the box but Norrie Hall blasted the pass well over the top. In the 36th minute, Bankies deservedly took the lead. A long ball by Jim Fallon was headed on by Joe McCallan and as Mike Larnach raced into the area he was pulled back by Boyd. Referee McGinlay rightly pointed to the spot, then book Burns for protesting. Phil Cairney never saw the ball as Davie Cooper stepped up and crashed a raging shot into the same corner as before.

Bankies turned it all on now and a brilliant ball by Jim Lumsden found Billy McColl in the clear. He made for goal and his final shot was just a fraction wide.

Bankies fully deserved the warm reception given them by the fans as they tripped off for their half time cuppa, but more was to follow after the break.

After Joe McCallan and Davie Cooper had both come close with great shots, they combined to put the game beyond doubt.

Jim Lumsden floated a perfect ball to the dazzling winger whose shot cannoned off the underside of the bar, but there was the blond striker performing acrobatics to flick the ball home from close range.

Clyde made a double substitution after this and as Bankies relaxed a little, the home side came back into the game.

However, the strong Bankies defence held out, aided by rather wild shooting from a disappointing and, in the end, completely demoralised Clyde side, who on this showing will will find it tough going against some sides in the Second Division next season.

As for Bankies, this was a fine performance and a great start to the new tourney. They recaptured all the flair and enterprise that was so evident in their play earlier in the season and were street ahead of Clyde inn every position.

Although there was not a failure in the side, there was no doubting the star of the show. The irrepressible Davie Cooper took the home defence apart,time and time again, and Bankies only worry must be how long they can keep him at Kilbowie, for,on this form,the cheque books will soon be waving.

With two home matches coming up, Bankies must fancy their chances of going far in this competition, but the first of these brings Raith Rovers to Kilbowie,as the teams meet for the fourth time this season. Bankies have still to record a victory over their Fife rivals after three close and highly entertaining matches.