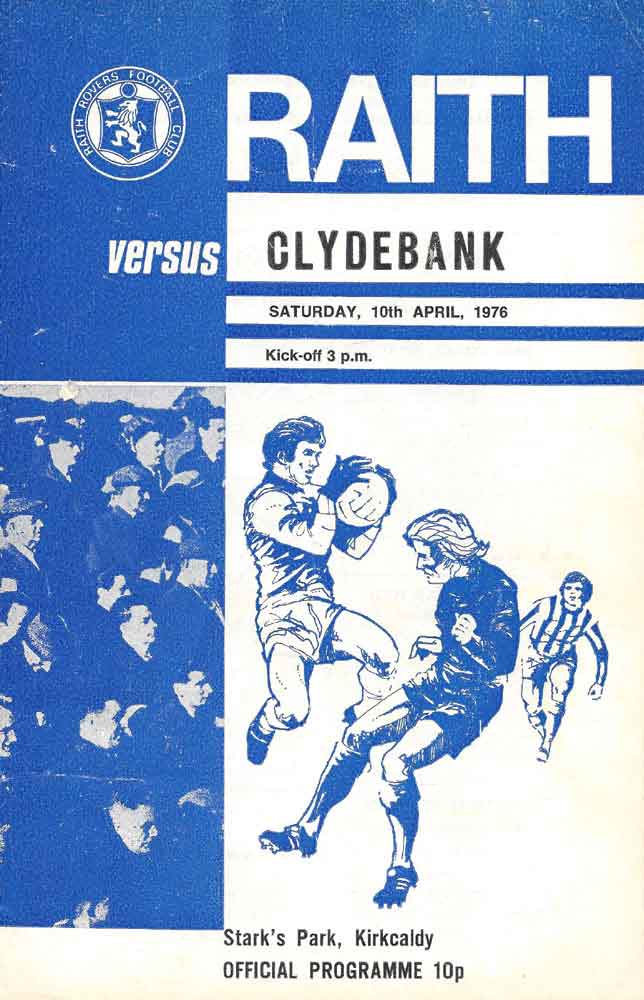 Bankies travelled the now familiar road to Kirkcaldy for the final sectional match in the Spring Cup. There was nothing at stake really, for both teams had left Clyde and Queen of the South well behind, and were already assured of a place in the knockout stages. However, having met Raith four times this season and failed to record a victory, Bankies set out determined to put one over on the Fifers.

The fans have been the real winner in games between the two so far, and another excellent crowd approaching the 3000 mark, was treated to a festival start.

Rovers sportingly lined up to applaud the new league champions on to the field and Bankies repaid the compliment. Then 24 autographed balls were kicked into the terracing before proceedings got under way.

With Jim Lumsden not fully recovered from the thigh knock he took at Alloa, Bankies rejigged their side with Bobby Provan coming in at centre half and acting captain Jim Fallon moving forward with the No 11 shirt.

The re-organisation did not appear to unsettle the side, for after a see-saw beginning Bankies gradually took control. With Jim Fallon operating just in front of the back four, and Billy McColl and Dougie Hay pushing forward from midfield. Bankies had the initiative, and they deservedly took the lead in the 19th minute. Brown and McDermott hesitated as a swing cross from Billy McColl came over, and Davie Cooper seized the opportunity to prod home the opener from a couple of yards range.

The Bankies defence was well on top, and with danger man Gordon Wallace well under control, the champions looked the likelier to add to their lead. Indeed, had Ian Browning and Davie Cooper taken reasonable chances, the game could have been sewn up by the interval.

What a change after the break, however, as Raith clicked into gear and forced Bankies back. The fifers stepped up their play as Clydebank tended to drop into their defensive shell, and on the hour mark they equalised with a disputed goal.

Following a scramble in the Clydebank area, Urquhart appeared to control the ball with his hand before shooting home from eight yards, but despite protests, the goal stood.

Raith had the bit between their teeth now, and spurred on by their terrific fans, they dominated play. In the 75th minute Starks Park erupted as Raith forged ahead. Urquhart again was the marksman, with a strong header from a Brown corner.

The game continued to flow excitingly, and with Mike Larnach replacing Ian Browning and Bobby Provan moving forward. Bankies made a bid for the equaliser.

A Bullet of a header from Provan flashed just wide, and with McDermott dealing confidently with two headers from Dougie Hay, Raith held on for their fourth victory over Bankies.

This was a great advertisement for football, and in a clean and sporting match that was thoroughly enjoyed by the crowd, there was enough to suggest both clubs will do well in the first division next season.

The draw for the latter stages of the competition thankfully kept them apart, with Raith paired with Dumbarton and Bankies taking on Albion Rovers.

Let's just hope that if the two meet again - and what a great Spring Cup Final that would make - Bankies can get over this jinx that the Fifers seem to have over them.