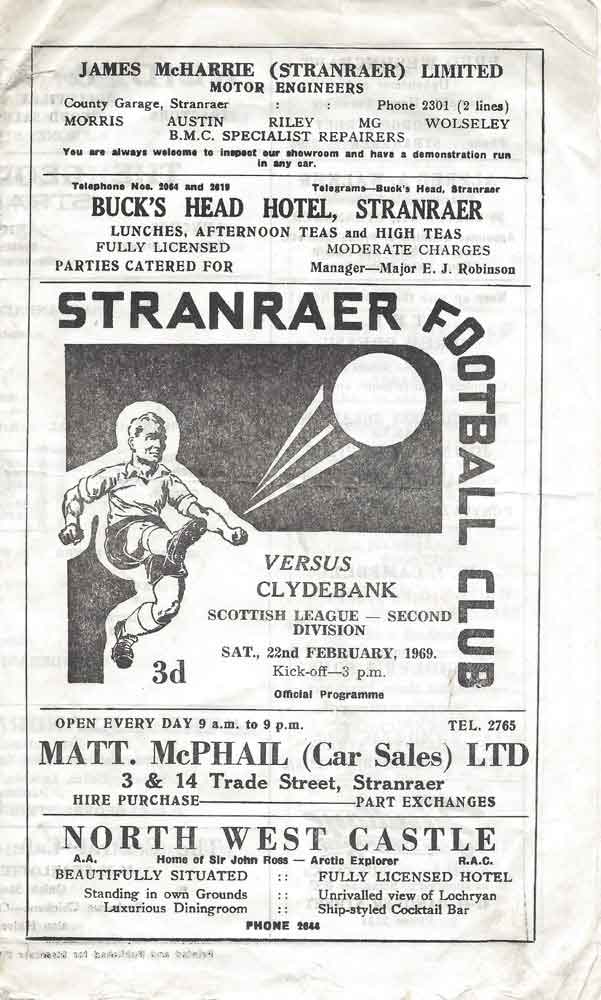 Gifted a goal in one of their few upfield forays, Stranraer were lucky not to lose two point - and suffer a humiliating defeat into the bargain.

The young Clydebank players ran the home side off their feet, but their finishing was woeful. For long periods they set up a barrage but could not get in the pay-off punch

He got the equalising goal with a lovely header from a cross by Love. He had earlier been denied a counter when MacLachlan made a magnificent one-handed save.

But the centre did not get much support from Munro and Love.

These two, adept at setting up an attack, were fast and clever, but unfortunately for the Bankies it was one or other who was left to finish and neither could. They made openings, then scorned them.

An old head in the forward line and the Bankies would have at least repeated their five goals of the previous week.

They lost a freak goal in only ten seconds. From the kick-off, Coghill made tracks. He was impeded by Hay, but the referee allowed the advantage rule as the ball ran free to Heap.

The right-half lobbed for the far post and a freak change in wind carried it to the post, where it rebounded over the line. Madden stood helpless.

From there on, however, the youthful Clydebank side took command. Urged on by Mitchell and Hay, they had Stranraer on the rack. Caskie and O'Brien interchanged but simply mesmerised themselves.

Once O'Brien, after cleverly beating three men in a cross-field run, took the ball into the path of McMillan and Munro but held on and tried to shoot on the turn.

His shot flew past, as his two mates stood dumbfounded.

But it was not all strictly one-way. Twice Fallon came to Madden's rescue. Stranraer's McMillan lobbed the ball over Madden's head but Fallon, showing a fine sense of anticipation, had raced back and with a cute overhead flick he cleared the danger.

In the second half, Hay sent over a cross, but Love missed it completely when standing clear. Again Stranraer's defence hesitated, but Caskie failed to gather when he was left clear.

Clydebank had a goal disallowed when Munro turned the ball in after it had struck McLachlan. But the linesman had flagged for offside.

Brockett opened Stranraer's defence wide and put through to Munro, who beat both Heap and 'keeper McLachlan on the byeline, cut back, then shot high over the bar with no one in front of him!

These were a few of the chances missed-and there were others.

Ruddy was lucky to escape with two rebukes from the referee for over-enthusiastic tackling, and Hay, too, came in for a lecture- mainly for talking back.

A cool head up front and two points were there for the asking, but the Clydebank youngsters made a deep impression on the southern fans.