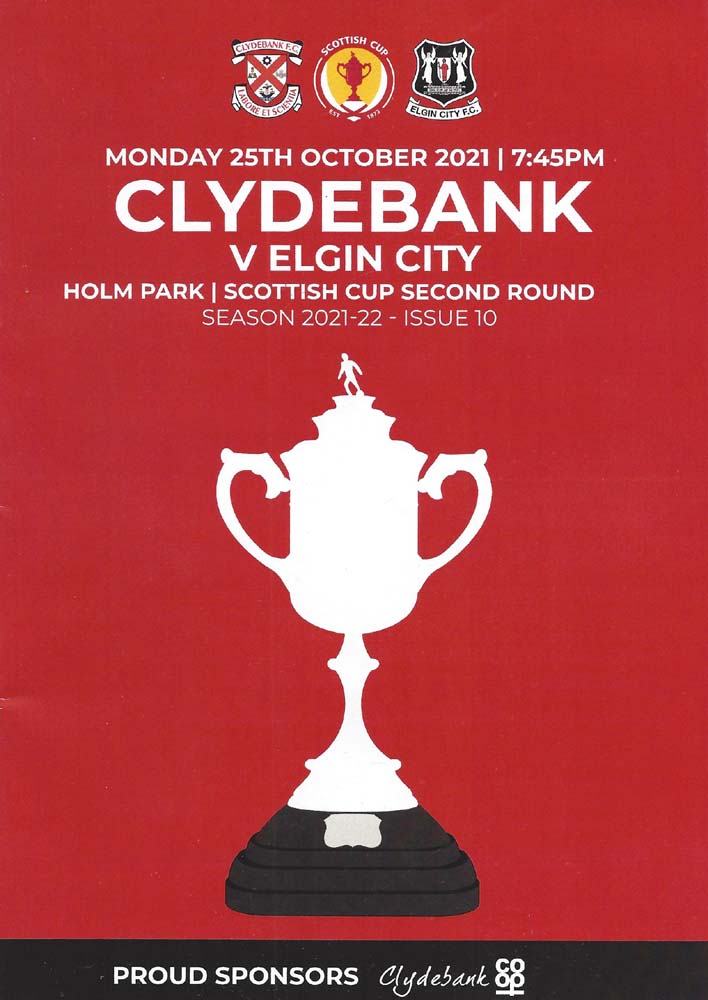 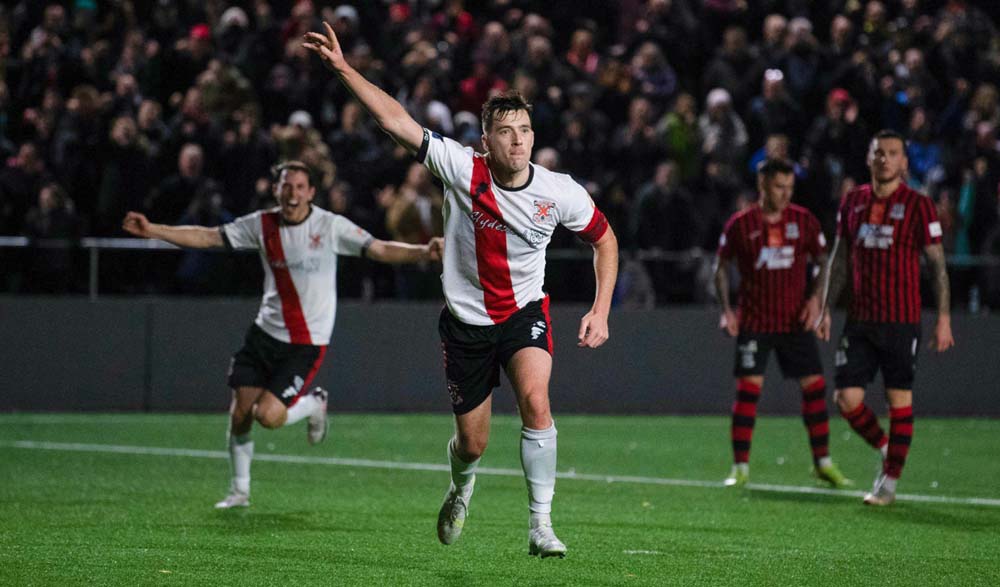 Clydebank earned a replay against League Two Elgin City after a superb second half performance at Holm Park in this Scottish Cup 2nd round tie. It was a remarkable turnaround after the Moray side had outplayed the Bankies for the majority of the first period, and led through a classy Rory McEwan strike.

The Bankies roared back and Nicky Little’s 69th minute penalty drew the sides level and despite hanging on at the end, the Black and Whites secured a draw and a replay at Borough Briggs on Saturday.

Gordon Moffat surprised just about every one when he named three central defenders in his starting line-up; a tactic which he tried against Darvel earlier in the season and had to be abandoned as we conceded an extra man in the middle of the pitch.

As a supporter, in a one off cup game, you want your team to start off on the front foot especially against a side that has been losing regularly. However, just like the Darvel game, Elgin threatened to blow the Bankies off the pitch in the opening 20 minutes. The visitors were as sharp as a razor with their passing and movement, and the pace down the wings was devastating. Full backs, Adam Hodge and Paul Byrne were being double teamed in the wide areas as we had three defenders in the middle to Elgin’s sole striker. There was no out ball for the Bankies either with such a narrow formation.

The players appeared to be shell-shocked by the level their opponents were displaying. When Elgin took the lead after 14 minutes it was well deserved. Euan Spark looked like a world beater in the opening spell of the game. Prior to the goal, he had burst through the Bankies defence and brought out the first real meaningful save in the match from Donnelly. Possession was regained immediately and Dingwall struck the ball low across the edge of the 18 yard box. Black failed to cut it out and it fell to McEwan who worked a quick one two, and slashed the ball into the bottom corner with the outside of his right boot.

For all their good play, Elgin didn’t actually create any other chances of real note and there was a sense that the Bankies had started to grow into the match a little bit. And credit to the Bankies coaching staff, who don’t just let things happen around them. They changed to four at the back, putting McLean to left back and pushed Paul Byrne into the midfield. McKinlay also went up top on his own with Little dropping back to a supporting role.

This almost certainly tipped the scales in the Bankies favour and what was to follow in second half. The space in the wide areas was closed out to Elgin almost immediately, and Byrne and Gallacher offered width that had been absent until then.

The second half was a revelation. After a fright in the first minute the Bankies assumed control that they were never to relinquish. Little played McKinlay through on goal just a couple minutes later. The forward should have scored but rattled the ball off McHale’s legs.

As the pressure mounted, Lee Gallacher sent in a cross that was half cleared straight to Nicky Little who volleyed it first time but unfortunately well over the bar.

The Bankies then introduced Liam McGonigle who would go on to play a pivotal part in the game after 69 minutes. A long ball was mis-judged by Spark, allowing McGonigle to nip past him just inside the box, In a vain attempt to stop the winger, Spark barrelled into him for a clear penalty kick. Nicky Little kept his cool and sent McHale the wrong way and sent the sell out crowd into raptures.

With the crowd now making plenty of noise, the Bankies went all out to get the winner; Darroch twice came close from headers. One, the keeper had to claw away, and the other which was a free header went off target. In the closing stages the Bankies had other opportunities. Substitute Mulcahy came closest with a 25 yard shot that curled away from the post.

After a terrible opening half an hour, the Bankies were well worth at least a draw. There does not appear to be a huge gap between the top of the West of Scotland League and the bottom of League Two, though the replay may come to a different conclusion. Invariably, the higher league side come through in a second match, but the Bankies should be heading to Borough Briggs with a bit of a spring in their steps knowing they can compete with Elgin. Best for me on the night were Jamie Darroch in defence, and Lee Gallacher who is just a terrific player at this level. Also, Liam McGonigle deserves a mention. We haven’t seen the best of the wee man, but he certainly made an impact when he came on.