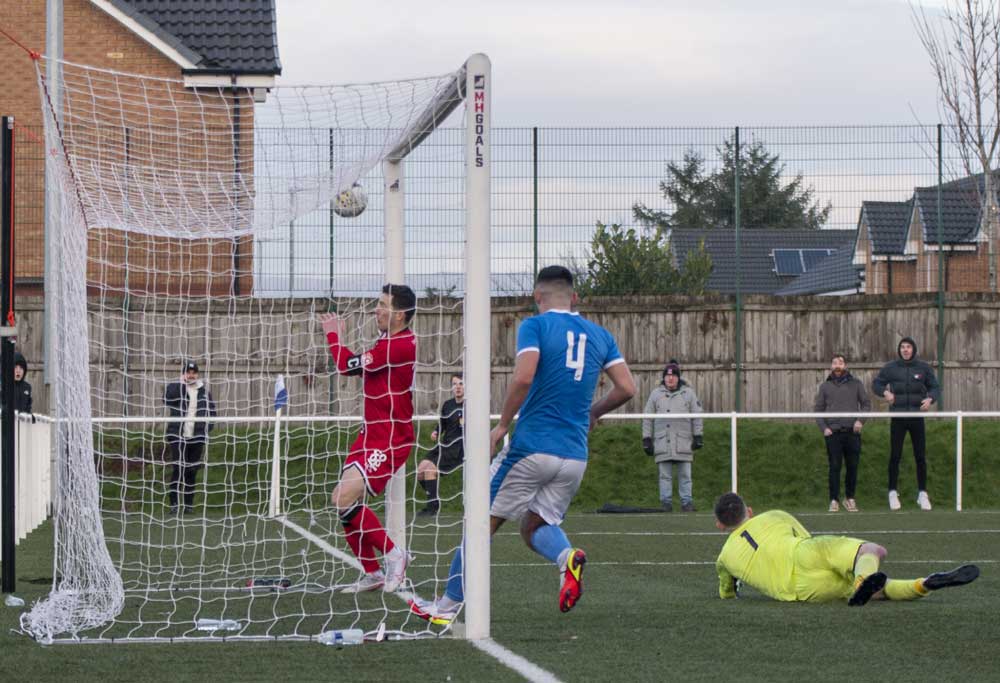 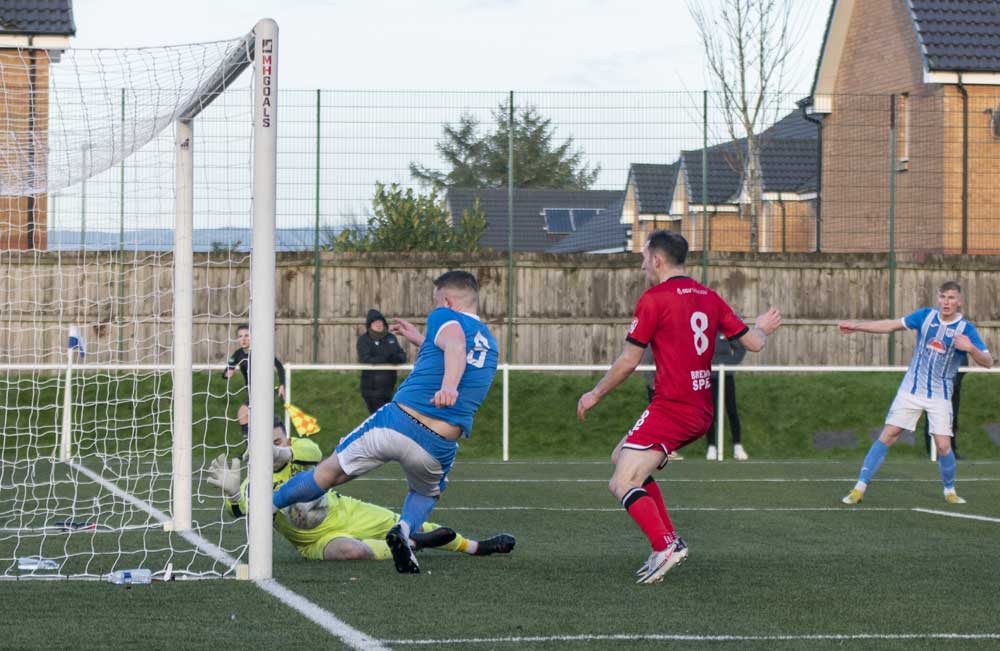 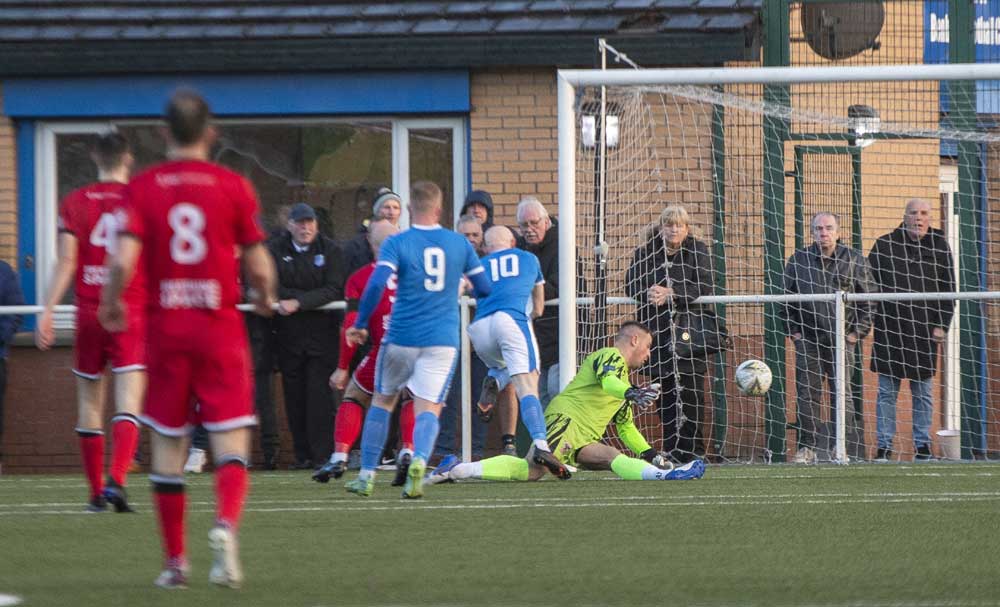 It wasn’t a very happy new year for the Bankies as they capitulated to a spirited Benburb side losing by four goals to nil at New Tinto Park in the West of Scotland League. It was a dreadful display from Gordon Moffat’s team and the last eight minutes were simply unacceptable as three goals were conceded in that period.

It was a familiar story this season as caution was thrown to the wind in order to retrieve a losing position. In 25 league games this season, Clydebank have lost the opening goal on 11 occasions. That is a hell of a lot of catching up that has to be done. It is amazing that the Bankies have managed to turnaround so many of these games. Teams have been regularly giving us a hard time in the early part of games, and we have needed a second half “performance” to rescue ourselves. These turnarounds have looked less likely in recent times and it certainly came home to roost against Benburb.

Hopes of an almost full squad to pick from were dashed when added to Adam Hodge’s suspension was news that Nicky Little had just come out of Covid isolation and hadn’t trained, and Liam McGonigle had taken a knock in training.

The team that Moffat put out on the pitch should still have been good enough to compete with mid-table Benburb, but it became painfully obvious early on who had the desire to win the game. The Bankies cause wasn’t helped when Byrne limped off after twelve minutes, but the die was already cast by that point.

Young Dylan Coll was finding it hard against Lewis Lovering and most of the first half threat came down that flank. After nine minutes Lovering beat Coll to a high ball which Murphy took on into the box on the left hand side, but he couldn’t keep his shot down as it flew over the bar.

The game was played virtually in the Clydebank half of the park, but for all their possession the home side weren’t looking likely to make the breakthrough, though it wouldn’t have flattered them if they had got a goal.

The Bankies finally registered a shot on goal after 24 minutes when Lee Gallacher sprinted through the middle on a breakaway. He had options on either side, with McPherson and Black supporting, but he elected to shoot from 25 yards out and rifled the ball well wide of the keepers left hand post.

The pattern resumed and the Bens had two great chances. The first when Lovering powered his way to goal from the left hand side, and only the brave intervention from Donnelly stopped a certain goal. Then from a corner, the Bankies defence were sleeping when the ball was cleverly played to the edge of the box for Langan, but he made a mess of his shot sending the ball well over the bar.

Just before the break, Niven was hurt as he was dispossessed by Murphy, and the striker who had a great game, took on Darroch, and sent in a shot that was well gathered by Donnelly.

If Gordon Moffat had decided to make a substitution at the interval I don’t think anyone would have complained, however he gave his players a chance to remedy their first half shortcomings, and to be fair they were doing a lot better.

There were two fantastic chances for Lee Gallacher to open the scoring. The first came when the long leg of Matt Niven prodded the ball to him down the left hand channel. He raced into the box, and from a good angle he brought out a fine save from keeper McLean.

Then minutes later full back O’Hear slipped on the left hand touchline allowing Craig Holmes to dink the ball to the back post where Gallacher volleyed the ball, and again McLean made a great block. In the ensuing melee, Benburb defender Livingstone had to hook the ball off the line as he nearly put through his own goal.

In the 61st minute the Bens took the lead, which was against the run of play at that point. It was a soft goal to lose as Murphy held off the challenge of Darroch, and then somehow managed to squeeze the ball under Donnelly and trickle into the back of the net.

It took a while before Moffat made any changes to the line up, and after a free kick from McPherson forced McLean to tip the ball over the bar in the 70th minute he made his move. Little and Mulcahy were brought on, and the more attacking formation to retrieve the deficit finally went wrong in a game and Benburb were ruthless in handing out the punishment.

Before, the goal-fest kicked in Little had a decent chance when a Lee Gallacher cross from the left took the goalkeeper out of the equation, but the Bankies striker ended up in the net at the back post while the ball didn’t

The second goal killed the game after 82 minutes, and it was a simple as you like goal from a corner kick. Launched to the edge of the six yard box, Lovering leapt unmarked, and headed the ball low into the corner of the net.

The Bankies proceeded to chuck in the towel, and two further goals were added in the last couple of minutes from substitute McTaggart. A punt up the park caught Niven and Darroch looking at each other as the sub ran through and put the game way beyond doubt. And to add insult to injury the same player dispossessed Darroch, whose lack of pace was exposed today, ran into the box to slam number four past Donnelly.

There’s not much else to say. Mulcahy and Little are about the only players to escape any criticism today. Mulcahy looked like he can add something to the side, and he should now be in the starting eleven to see if he is up to the job. It has been mooted by some that Little’s performances this season haven’t been as good as his goal tally suggests. Take him out the team though, and you sure as Hell notice it.

It has been a long unbeaten run away from home that had to end at some point, and most fans can take defeat, and God knows Clydebank supporters have had to put with a lot of losses over the years. It is the manner of the defeat that is concerning. This has probably been building for a wee while now, and hopefully this has been a painful lesson for the players, and we will see a big improvement against Rob Roy next week.