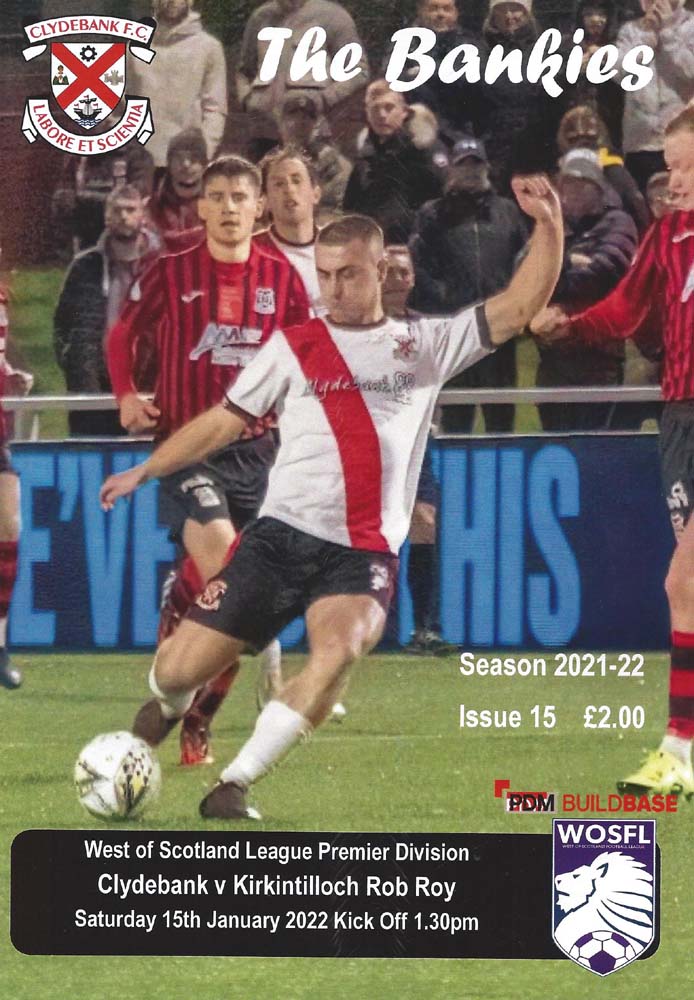 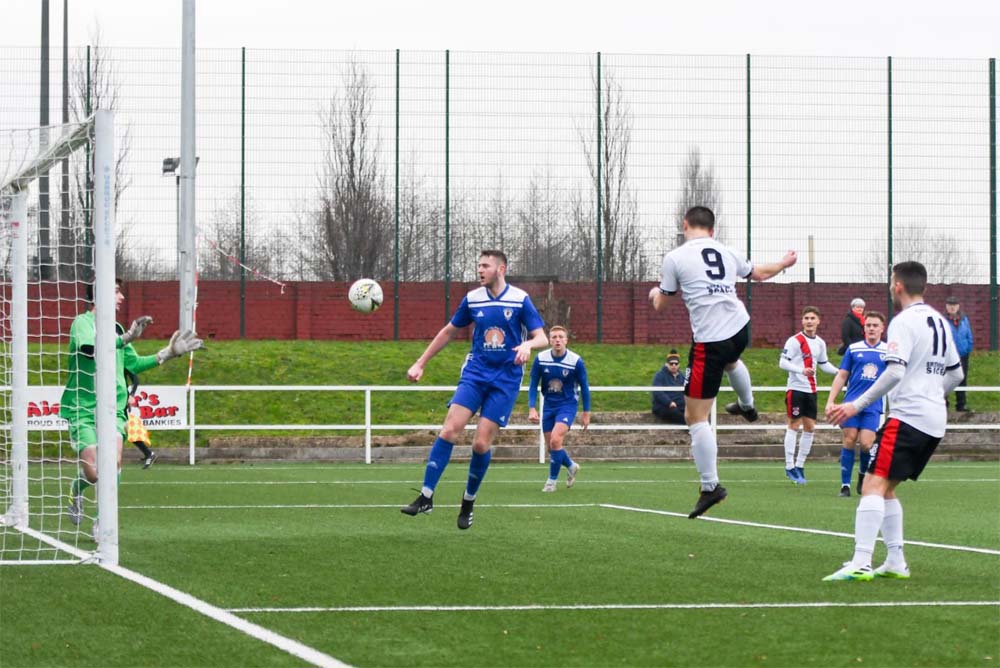 After last weeks humiliating 4-0 defeat at Benburb, Gordon Moffat looked to his players to give him a reaction on the Eve of Clydebank’s most important cup tie in years when in-form Annan visit Holm Park in the 4th round of the Scottish Cup next week. And he got it……but only for 45 minutes. Two goals up against county rivals Kirkintilloch Rob Roy who had been reduced to ten men, The Bankies contrived to throw away the lead, find themselves down to ten men, and inexplicably lose the match completely in the last five minutes.

The Bankies had a bit of a makeshift defence on the field for the start of the game with Adam Hodge serving the last match of his suspension, and Byrne and Niven not recovering from injuries from last week. This meant that Darroch was partnered by Matt McLean and youngsters Coll and McHugh in the full back slots. Ciaran Mulcahy started his first match since August and Hamish McKinlay joined him up from in a fairly attacking line up. Slattery was on the bench and Holmes was missing completely.

Clydebank started off fairly slowly and Dylan Coll was booked after barely 30 seconds were on the clock. It was a bit of a wild challenge, but the ref set out his stall early and was a sign of some of his later cuckoo decisions.

Ciaran Mulcahy showed the supporters what they have been missing in his injury ridden Bankies career when he scored twice in the opening nineteen minutes. The first in the Bankies first real attack was a lovely goal. The deep lying Nicky Little played the ball out wide to Gallacher, who in turn rolled it down the right touchline for McKinlay. From here McKinlay delivered a perfect cross into the box which Mulcahy directed into the net with a well placed cushioned header.

It was an entertaining start to the match and the Bankies deserved to go two up and again it was from the head of Mulcahy. A free kick from the right was spun into the box by Gallacher, and Mulcahy got the faintest of touches to turn the ball just inside the far post.

Rob Roy were working hard however, and managed to pull a goal back after 26 minutes. It was a terrible goal for the Bankies defence who just switched off. A long throw was launched into the box, and there was no challenge to be seen. The ball bounced in the box for O’Kane who took the ball on his left foot and slid it under Donnelly.

The Bankies were looking a bit more fluid going forward thanks to the inclusion of Mulcahy and a better first half performance from McKinlay. On the half hour Mulcahy could have completed a hat trick when he showed great strength to hold off a Rabs defender in the box, but his low driven shot was well stopped by the foot of Robertson.

Clydebank’s second half prospects looked even better just before the break as Rob Roy were reduced to ten men when Cairns received a second yellow. There was no doubting it was a foul on McGonigle, but a second yellow card seemed over the top from the ref. Rab’s manager Stewart Maxwell agreed with that assessment only to find himself in the ref’s book.

What happened next is anyone’s guess, as the Clydebank who appeared in the second half was not the one that played the first. Ten man Rob Roy were making all the running. It was as if the Bankies were waiting for things to happen for them instead of taking the game to their opponents.

When the visitors equalised after 54 minutes it was as disappointing as it was expected. The Bankies defence were caught out again, and as Dailly got away from Darroch, the striker then took the ball round Donnelly and planted the ball in the back of the net with his left foot.

The ten men nearly took the lead five minutes later when they somehow appeared to have acres of space as they cut through the Clydebank defence. The ball was played to O’Kane on the right and his low cross flashed across the six yard box just beyond the despairing lunge from Dailly.

McGonigle then received a ridiculous red card on the hour. He had already stupidly been booked for complaining about a back pass that wasn’t given, when he challenged the keeper for a 50-50 ball. Keeper Robertson’s academy award will be in the post after his delayed theatrics. It was clear that McGonigle had not come close to touching him, but the clueless referee gave his second unjust red card of the day.

The game and the crowd went extremely flat after this, maybe the supporters sensed it wasn’t going to end well. There was a brief glimmer of some excitement when Gallacher had a shot blocked from a good position by a defender and Mulcahy had a header go wide that he just couldn’t get enough power on.

As the game reached its closing stages, there seemed to be no impetus from Clydebank going forward and Rob Roy looked like they might just sneak it which they did with six minutes to go. The Bankies had already been warned minutes earlier when sub Henry headed at goal from a corner and Donnelly saved smartly. This time the ball was sent to the near post where ex-Bankie Ian Gold nodded to middle of the goal. There was Dailly who found the net with his head from a text book set play.

There was no grandstand finish forthcoming from the Bankies, and their bright finish to the game ended in bitter dis-consolation. It is hard to find a good excuse for losing a match when two goals up especially with your opponents down to ten men. The management of the game was poor, and the players should really have done better at the start of the second half when they had all the advantage in their favour. The performance from Ciaran Mulcahy was the one positive to take away from today’s game.

It has been a terrible start to the year, but the players have to sort themselves out for the cup game against Annan next week. The Galabank side have hauled themselves into the League Two play off spots with an impressive nine match unbeaten run. It is however a one off match. The Bankies are capable of so much more than we have seen in recent weeks. One titanic effort could see the club reach heights not seen in a long time for the Clydebank supporters. The league is over. We need to forget about that now and concentrate on this tie which could do wonders for the club on and off the field.