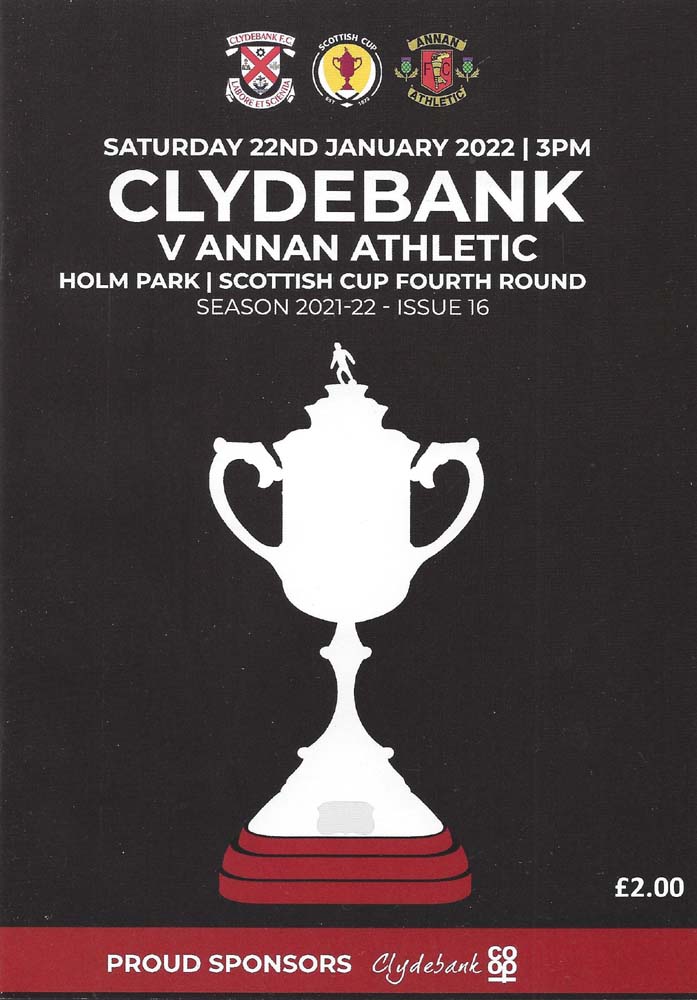 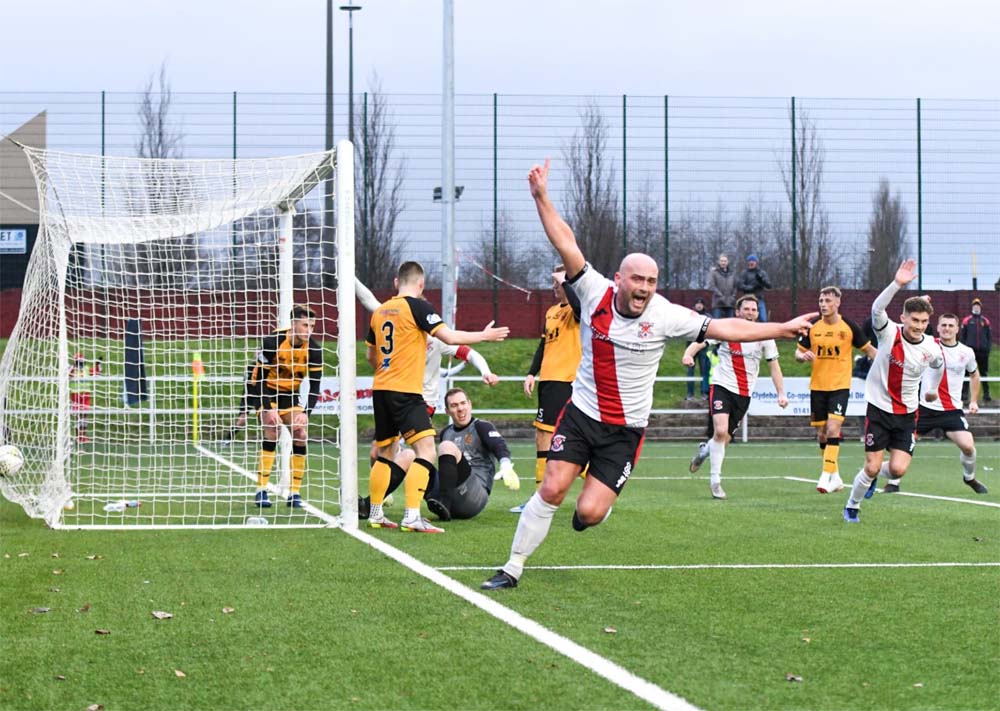 Clydebank’s interest in the Scottish Cup ended in heartache at Holm Park this afternoon in an epic match against Annan Athletic after extra time. Leading by three goals to two with just two minutes left on the clock, the Bankies energy banks were spent and the Dumfriesshire side netted an equaliser and went on to score a decisive blow in the third minute of stoppage time. There were echoes of another classic Scottish Cup tie of almost 30 years ago when the Bankies led Aberdeen by a similar scoreline only to lose two late Scott Booth goals and exit the competition.

The Bankies players will be able to look themselves in the mirror tomorrow morning and hold their heads up high knowing they have let no one down. They were never outplayed by a team two levels above them, who were on an impressive nine match unbeaten run, and are the form team in league two. It was simply the case that the players were dead on their feet and had no more left to give. It was an agonising and cruel way to lose the game, but they have done the club and themselves proud in this Scottish Cup run.

With a full squad to pick from for the first time in months, Gordon Moffat had some choices to make with the key decisions being the inclusion of Chris Black and Hamish McKinlay in favour of Frazer Johnstone and Liam McGonigle.

It was evident from early on that Annan’s main strength was going to come from set pieces, and the Bankies suffered an aerial bombardment whenever they crossed the half way line. Corners of which they had 14, free kicks, and any throw-in from 35 yards or closer were launched into the box. The Bankies survived this early salvo, but fell behind after nine minutes from a terrific strike.

Adam Hodge was penalised for a foul on Aidan Smith whose legs turned to jelly whenever anyone came near him about 25 yards from goal. Owen Moxon curled a stunning effort in to Donnelly’s top right corner giving him no chance.

The Bankies responded well after this period and could have earned an equaliser after nineteen minutes when a fine move down the right wing saw McKinlay deliver a great cross to the near post. Keeper Fleming bravely beat Mulcahy to the cross and the ball fell to Niven, but he was stretching all the way and could only divert it over the bar.

Annan knowing a second goal could make it nigh on impossible for the Bankies to get back in the game missed an absolute sitter just six minutes later. A corner from the left went across the face of the goal missing everyone. The ball fell for Swinglehurst and with the goal gaping the Annan captain smashed the ball over the bar from six yards.

A clash of heads between Darroch and Wallace followed which saw the visitors reduced to ten men temporarily. The Bankies almost capitalised, exploiting the extra space, allowing McKinlay to come close with a 20 yard shot which was always rising over the bar.

The Bankies were putting Annan under pressure as the break approached. Nicky Little nutmegged Steele on the left wing and from a tight, tight angle he tried to find the far corner, but the ball went agonisingly wide.

As the clock ticked over to 45 minutes the deserved equaliser came. A Lee Gallacher corner to the far post was nodded back in to the danger area by Jamie Darroch, where Hamish McKinlay did well to stoop low to head the ball over the line.

The Bankies looked to continue this form into the second half and a strong header by Mulcahy unfortunately went straight into the arms of Fleming.

It was Annan who were to go back in from after 54 minutes with a simple goal. For the umpteenth time the ball was launched into the box from a throw-in. If you do it often enough, you are going to get something off it eventually. Maybe the Bankies could have been a bit more careful about giving free kicks and throw-ins too close to goal. It was Douglas who managed to get his head on the ball and put it away.

The Bankies refused to go away and they drew level after 67 minutes with the goal of the match. The ball was played forward to McKinlay just inside the box and he did well to direct the ball into the path of the tireless Chris Black who volleyed it first time diagonally into the far corner for a quite superb goal.

Both teams could have won it before the ninety minutes were up. A delightful cross from the left hand bye line by Byrne found the head of substitute Johnstone at the edge of the six yard box. He only had to hit the target for a certain goal, but it skidded off his head and drifted wide of the post.

At the other end, another set piece led to panic in the Bankies box as Donnelly failed to claim the ball. Luckily, the Bankies had men on the line to block and then clear the ball to safety.

The Bankies looked visibly tired as extra time begun. Several players were stretching their legs out trying to squeeze a few extra drops of energy out of them, and just three minutes in it looked like it might pay off.

A cross from the right was bundled against the post by Frazer Johnstone and the ball broke nicely for Ciaran Mulcahy who rammed the it home from eight yards. For a while it looked like the Bankies with the crowd behind them might go on to win the game. Lee Gallacher from a quick breakaway sent a fine drive which just went over the bar, but at the turnaround all the exertions finally caught up with the Clydebank players.

Under a constant pounding, the Bankies could not get out of their own half in the second period of extra time. With a minute to go disaster struck as a fairly harmless pass into the box saw Donnelly and Little collide and the ball spilled into the path of Docherty who cracked it off the face off the bar straight to McCartney who rolled the ball into the net.

Worse was to follow as what was about to be a win, turned to a penalty shoot-out, then an outright loss. With virtually the last passage of play in the game, Johnson weaved his way into the box down the right hand side and picked out Anderson at the back stick and he duly headed the ball past Donnelly, and the Bankies players sunk to their knees.

It’s hard to know what to say in the face of such a devastating loss, and in particular how it all turned round in those closing minutes. Every one of the players contributed to a quite fantastic run in the cup, and deserve all the praise going. The usual players will get the plaudits, but I would like to pick out Chris Black today. He is probably not the Bankies best player, but the effort he expended today, and in the cup run in general, was of super hero proportions and he did not deserve to be on the losing side. Hamish McKinlay is another where there has been criticism in the past. He may not have the physical attributes to play as a number nine, but he had a very effective game in the wide area for the second week in a row, and was unlucky to be substituted. Talking of number nines, it looks like we may have one. Ciaran Mulcahy had another excellent game. His prowess in the air is outstanding; his timing for high balls is a level above and he was well worth his goal. It was just his lack of games this season that caught up with him at the end. For the rest in general, the bar has been set and the players are capable of reaching it. With one or two additions this team could go places.