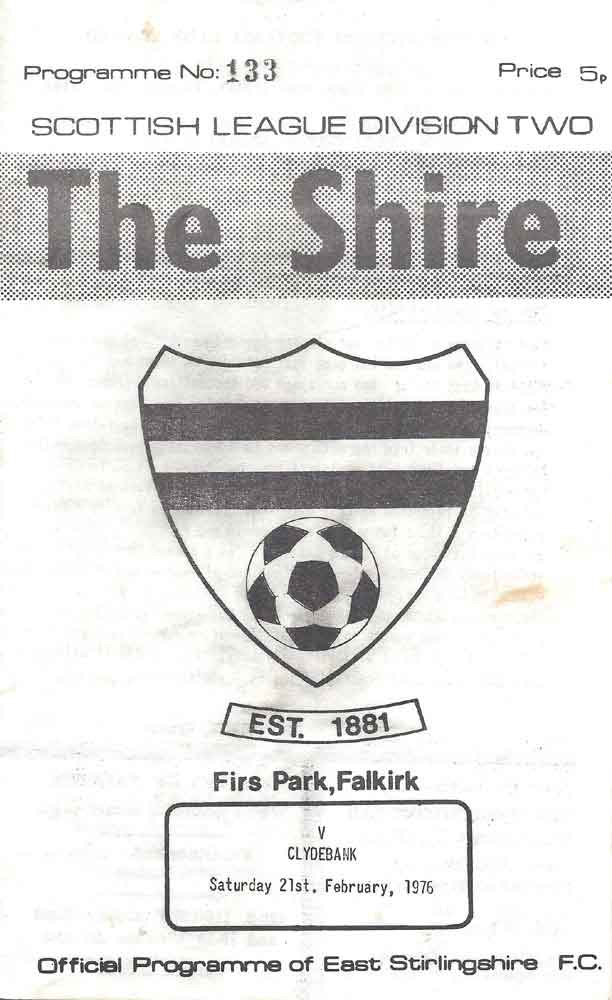 Back came fit again skipper Sammy Henderson for the vital clash with old rivals East Stirling at Firs Park, as Bankies returned to the line-up that had been so successful earlier in the season. Games between these two always have that bit extra needle, and with Bankies needing both points this match promised to be no exception.

The league leaders started aggressively and good work by McCallan might have been cashed in on had there been more support in the Shire penalty area. Then Henderson, Lumsden and McCallan combined well to cut open the home defence, only for Larnach to mishit his shot from good position.

Bankies were streets ahead of their opponents who seemed intent on continuing the campaign among the other second division teams to kick Bankies off the park. Only the old failing of missing chances kept the scoreline blank.

Larnach again had a chance to open the account when a Cooper header left him free, but from eight yards he saw his shot blocked by Gourlay. The ball rolled along the line hit the post and rebounded safely to the keeper's arms without any Clydebank forward sharp enough to challenge.

Them Cooper showed he too could miss chances, when a great long ball by Fallon was chased by the winger and full back McGregor. Davie won the race, but hammered the ball over the bar.

Some of the East Stirling tackling was brutal as the lunged in with boots swinging. As usual, Davie Cooper was singled out for rough treatment, but in fact it was a foul on Jim Lumsden that led to the only goal of the game in the 32nd minute.

Soutar fouled Bankies midfield dynamo about 10 yards inside the home half, and after standing on him for good measure, he was deservedly booked. Sam Goodwin flighted the free kick into the area, and there was the golden head of Joe McCallan perfectly placed to twist and flick the ball into the corner of the net.

Within a minute, Bankies leading scorer almost added another, when he again out-jumped the Shire defence and sent in a superb header that Gourlay brilliantly touched over the bar.

Sam Henderson, beginning to find his feet again after a slow start, also came desperately close when a powerful shot from the edge of the box shaved a post.

In the whole of the first half, East Stirling failed to produce a constructive attacking move, so intent were they in preventing Bankies from playing football at all costs.

The second half started with a flurry from the home side. When McCulley flighted a good cross to Mullin. His header seemed to be a scorer all the way until an acrobatic dive by Roddy McKenzie produced a great save.

After this scare, Bankies returned to the offensive, and applied pressure that threatened to overrun the home side. Corners galore were forced, but no one could put the finishing touches to the outfield superiority.

Shire still appeared to want to leave permanent marks on Davie Cooper's legs and McGregor had to be booked after numerous unfair challenges.

Midway through the second half, Bankies seemed to relax a little and let their opponents come more into the game.

Stirling had a deceptive shot through a ruck of players well saved by Roddy McKenzie at the expense of a corner, but as Bankies broke quickly, the full back was a lucky man indeed to see only the yellow card after a wild swing at who else - Davie Cooper.

Shire had much more of the match in the closing stages, but Bankies held out without too much trouble difficulty. With ten minutes left, Sammy Henderson appeared to take a knock and was replaced by Billy McColl; hopefully this was just a precautionary measure for Bankies skipper who has had more than his fair share of injury problems this year.

Thus Bankies came through a tough bruising match with two vital points,and no doubt a few knocks. The news that Queens Park had defeated Alloa brought roars of delight from the travelling support, for this now means that Bankies need just two points from their last two matches to win promotion.

A win against Forfar at Kilbowie would be a fitting end to the home league programme that has seen Bankies drop just five points and conceded only eight goals.

It would be a realisation of their ambitions, and the pay off for all the hard work that everyone connected with the club has put in this season if Bankies could clinch promotion to the first division.