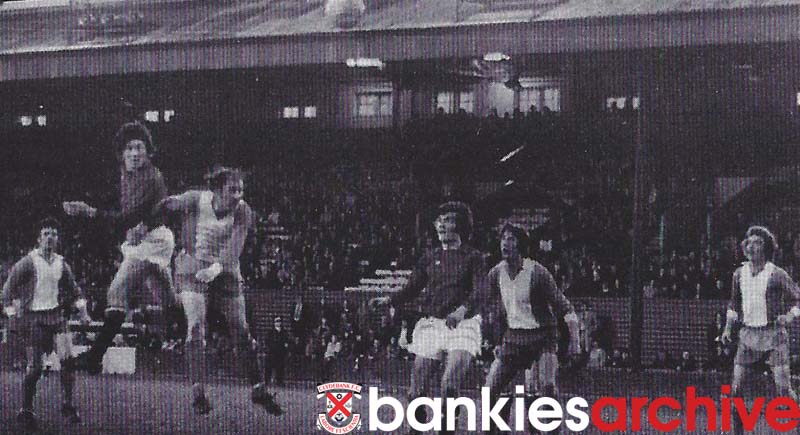 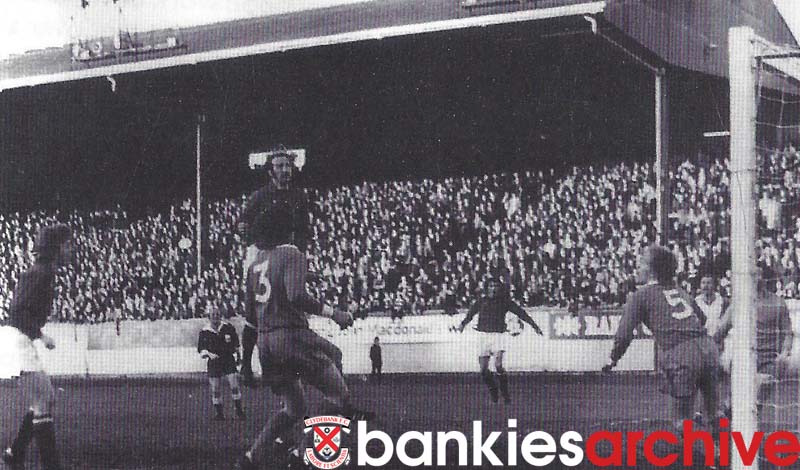 A Davie Cooper penalty which crashed off the bar midway through the second half was the turning point in this torrid cup final at Firhill on Monday night. Bankies twice took the lead, but succumbed to fantastic Airdrie pressure in extra time.

A fine spring evening brought out a good crowd in excess of 8000 and before they had time to settle Bankies took a surprise lead.

With their first attack they forced a corner on the right, and when Davie Cooper's corner came over Mike Larnach rose unchallenged to bullet a header past Poulton.

It was a tremendous start by the locals, but they were soon on the receiving end as Airdrie fought for the equaliser. Cairney hammered a 25 yarder just over the top in the 25th minute and this started a siege on the Clydebank goal.

A Cairney cross was headed across goal by McCulloch and when Wilson dived to send in a point blank header Roddy McKenzie leapt up to make a wonder save.

The keeper was magnificent as he kept the eager forwards at bay and he brought off great saves from McVie and Cairney.

Bankies goal led a charmed life as McCulloch headed against the bar and before the ball was cleared a Whiteford header was kicked off the line by Jim Fallon.

It was all Airdrie as they threw everything forward in the final 10 minutes of the half, but unbelievably the ball stayed out. Marsh bulleted a header off the bar yet again, then Whiteford hit the post before Hall relieved the pressure with a clearance from the goal line.

The sighs of relief from the Bankies fans echoed around the ground as the half time whistle blew, but on the resumption Airdrie still held the upper hand. Walker fired a 20 yard drive just wide before Bankies could hit back.

Gradually though the locals forced their way forward and a good move between Lumsden and Hall ended with McCallan heading just over.

In the 55th minute Willie Munro stunned the Bankies fans by replacing sub Ian Browning with Bobby Provan, It seemed strange taking off a man who had been on the park only 20 minutes or so, and with an extra defender it looked as though Bankies might be settling for the one goal and trying to play out time.

However, the 62nd minute brought Bankies a great chance to tie things up. Marsh pulled down Larnach, and referee Mullen had no hesitation in pointing to the spot. Davie Cooper stepped up, but hammered his kick off the bar, and Airdrie lived again.

Jone replaced Wilson, and in the 75thminute Firhill erupted when the Diamonds deservedly equalised. A long ball by Lapsley was headed back across goal, and McCulloch hooked a fierce shot into the net.

Play flowed from then till the whistle, with both teams coming close but extra time was about just reward for 90 minutes of exciting, industrious football.

Bankies supporters looked to their full time training to show through as the game entered its final 30 minutes and they were on their feet in the first minute of extra time.

A brilliant run by Davie Cooper left a string of defenders beaten, and his 25 yard shot was right on target. Poulton dived across goal and stopped the shot, but there was not a Bankies supporter in the ground who was not convinced that the keeper pulled the ball back from behind the line. The linesman was noy up with play however, and failed to give the decision.

Bankies continued to attack and a Lumsden cross was headed for goal by Joe McCallan but Poulton saved well. After 100 minutes of thrilling football, the huge Bankies support again went wild with delight as a great run by Norrie Hall split the Airdrie defence and Davie Cooper's cross was brilliantly headed into the net by a jubilant Mike Larnach.

The players mobbed the goal hero and it looked good for Bankies, but Airdrie pulled themselves back again,and on the stroke of the final turn round Jones ran up the right wing and his cross was rammed home by the in-rushing McVie.

So,15 minutes to go and all square again.it looked as though the next goal would be the clincher and it was Airdrie who produced it.

Straight from the kick off they forged forwards, and Jones neatly side-stepped Fanning to make room for himself in the area. His shot rebounded from the far post, but there was McCulloch on hand to shoot home.

It was a body blow from which Bankies never looked like recovering, and with five minutes remaining Airdrie made sure when Walker hammered a 25 yard free kick into the corner of the net.

Bankies cup dreams were over, but they had no complaints. Disappointment, certainly, for they had done magnificently well to reach the final and had battled bravely.

Had the penalty gone in, then it is difficult to see how Airdrie could have come back, but they played brilliantly, and but for some cruel luck and stout defending by Bankies during which Roddy McKenzie was quite superb then the Diamonds would have won on normal time.

It was a great final which the crowd thoroughly enjoyed and both sides deserved the ovation given them at the end.

Bankies trooped off dejectedly at the finish with only runners-up medals to show for their great effort, but they also had their fans applause ringing in their ears and these fans will be back next season to cheer the Bankies on to great things in the first division.