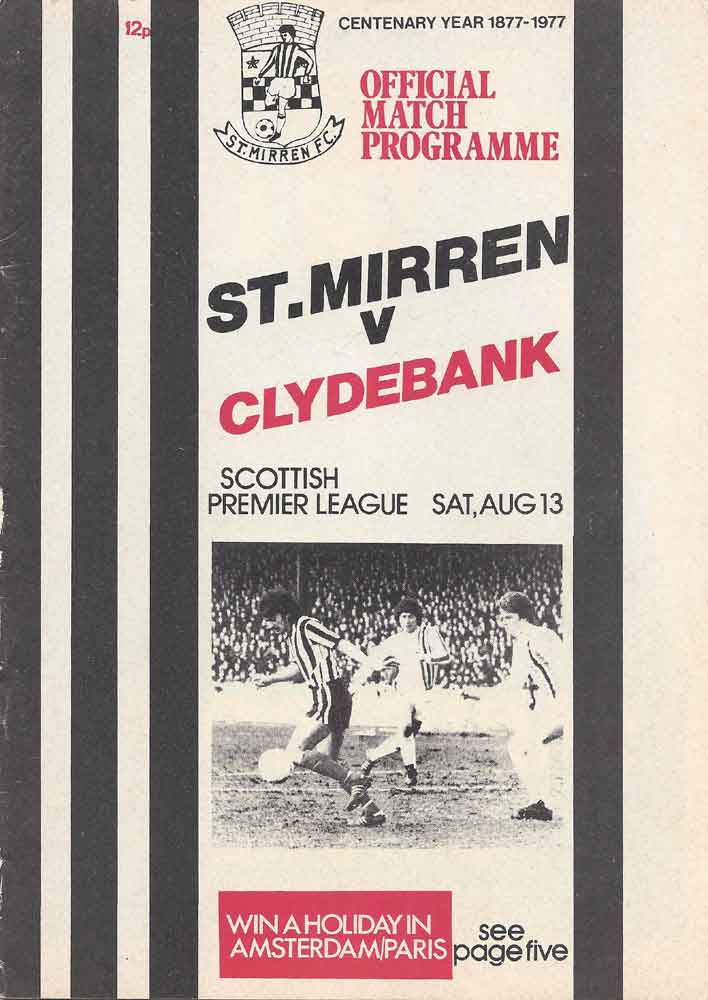 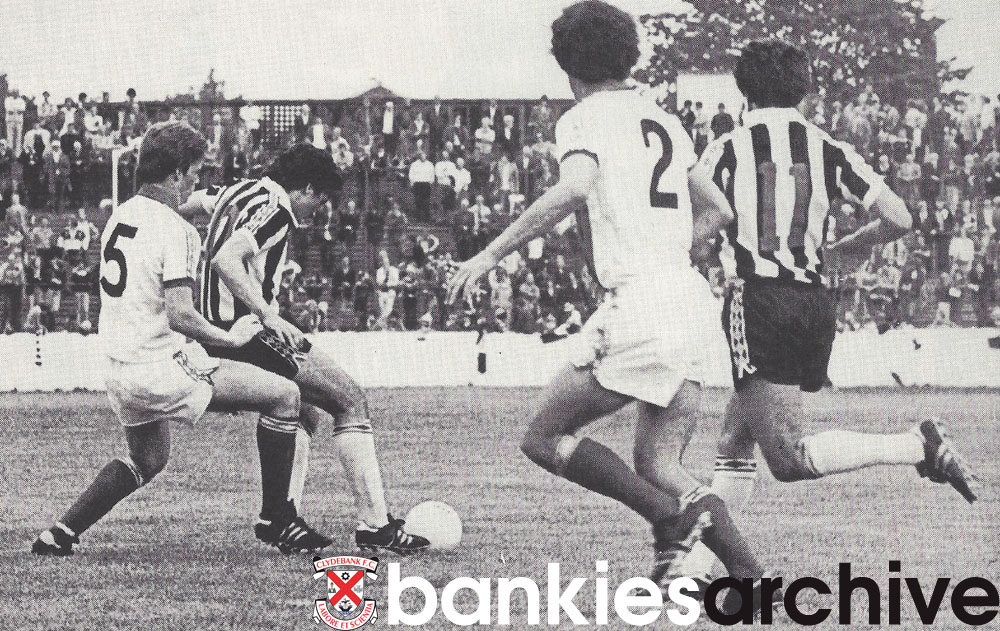 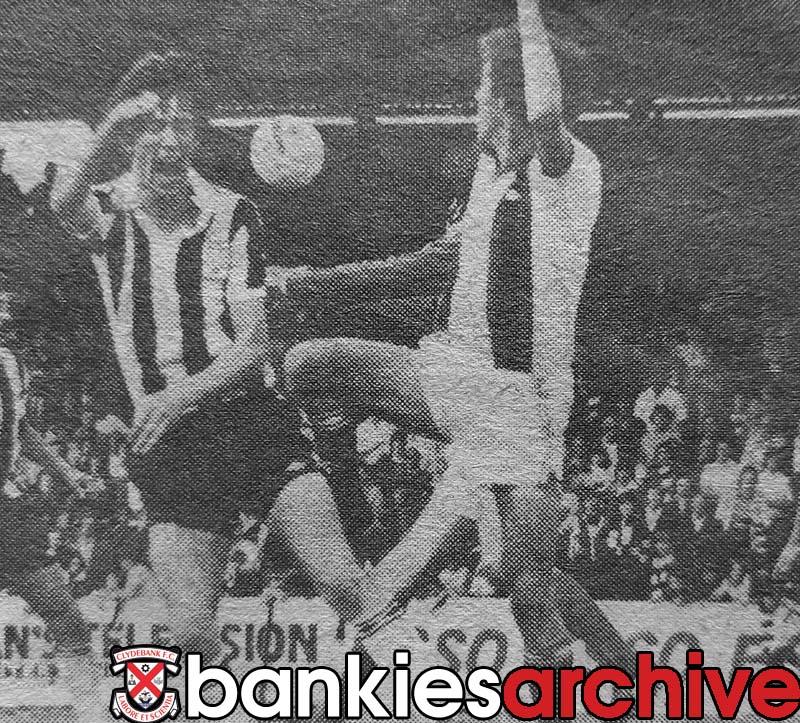 Clydebank made a useful, if rather fortunate start to their Premier League campaign with a draw at Love Street.

Let there be no doubt about it Bankies were lucky – but then does not luck play a huge part in winning any championship?

As Gary Player once said after a spectator told him how lucky he was with his bunker shots, “The funny thing is the more I practice the luckier I get.” There’s no answer to that.

Yes, Clydebank could have snatched both points in the closing seconds when a great low shot from Mike Larnach skidded narrowly past Hunter’s post. Before this Saints twice struck woodwork and had an effort scooped off the line.

Earlier it was Larnach who had put Bankies back on level terms after Saints had scored with a penalty, and a doubtful one at that. Jim Fallon was adjudged to have pushed Torrance off the ball and Torrance himself converted the kick. If that “push” by Fallon was a legitimate penalty then there should have been another three spot kicks awarded.

That is the trouble with Scottish referees – inconsistency. Bankies replied in the best possible way – with a goal two minutes later from their top front runner Larnach.

It was an exciting game, brilliant in patches, played by two sides not scared to come at each other. Clydebank’s midfield looked pretty useful with McColl his usual dynamic self.

O’Brien manufactured several good moves from the flank. He can count himself unlucky to be booked for a foul
-
Report 2
------------
Gone for ever, surely, is Love Street's poor-house image. A large, noisy, but well-behaved crowd, cushioned Press-box seats, and a cracking contest afield, to boot.

And if Paisley fans claim that having hit timber three times, Saints were unlucky not to win, let them reflect on their penalty from which the homesters did score. It was definitely in the squashy category.

Admittedly, Saints were well on top when it came along, but Lumsden's tackle on McDowell was not all that lethal - and it was touch and go whether Donny was inside the box, anyhow.

But Bobby Torrance had no qualms as he belted the spot-kick home. It was a short-lived lead. Four minutes later Bankies were level.

McCallan beat Hunter to a ball which should have been the keeper's. Houston helped it on and, in a goalmouth melee, Larnach got the final prod.

For the record, Saints' wood-touchers were a great McDowell shot on to the bar, a Stark header which nearly shattered the post, and an Abercrombie sneaker which caught the other post on its way past,

Hunter was not nearly so busy as Gallagher but he had one great save from a McColl header and was mighty relieved when a last minute Larnach grounder whizzed just past.

Gerry O'Brien was booked it the 80th minute for persistent fouling. He could scarcely, have been surprised, Early days yet, but on the evidence here neither of these Premier League babes should be in bother come April.

If there were no Peles or Beckenbauers afield, there were some damned good imitations.

Fitzpatrick (first half), Stark (second half), Reid, McDowell, and Abercrombie were “Super Saints”

Finally, their new Premier League status obviously hasn't overawed either of these teams. They both still go like buzz bombs.
-
Report 3
-----------
Clydebank's team bus left Love Street with the door of the boot flapping wide open. It suggested a hurried departure. Did they have the engine running since half-time?

Clydebank may have feared that the fates would haul them back to play the game again. They could not expect too much sweet luck a second time.

St Mirren twice struck wood. An overhead kick by Torrance from the edge of the box bruised the paint of a post. In one glorious melee Clydebank scraped the ball off the line from McDowell and Torrance.

Good fortune deserted Clydebank only at the end. They might well have won in the last seconds when an angular shot by the vigilant Larnach skidded narrowly past.

Instead the result of the meeting of the two newcomers to the Premier League was a tight little Premier League draw. They played an uneven game that was sometimes brilliant.

Each side climbed on to the foothills of the bigger ball game in its own way. Clydebank were well drilled. They concentrated on sensible and efficient defence. They were game. When St Mirren scored after about half an hour through a penalty by Torrance Clydebank surged back. Within a couple of minutes they took their equaliser from the alert boot of Larnach.

St Mirren buzzed about. They saw no reason why higher prices at the gate or the fact that they had six men off the selection list for reasons of injury and suspension should mean less entertainment on the park.

Although Clydebank's O'Brien had his name taken there was no glum Premier League fouling.

-----
Bill Munro said: What an entertaining match it was at Paisley on Saturday. These two sides play wonderful attacking football that the crowds love to see. The game was almost a continuation of last season's three thrillers.

I was delighted with the result-a draw away from home in the Premier League is pretty useful,

Our shows against Thistle and St. Mirren have proved that we can survive without Davie Cooper. People said last season that we were a one-man team - almost a 'Cooper United.' Obviously we miss Davie - who wouldn't - but we have adapted to play without him. Given time Gerry O'Brien will wear Cooper's hat.

It will also take time to build up the pool but there is no way we will sign players for the sake of filling jerseys. Each player we sign will have a specific role to play. I think we need another two experienced men and two or three more youngsters..

Back to Saturday at Love Street; I thought our top men were Gerry McLauchlan, Jim Fallon, skipper Jim Lumsden, who worked like a Clydesdale for the whole 90 minutes, and, of course, Mike Larnach.

I've been delighted with the promise shown by young David Houston - he's a wonderful prospect.

I do hope so much we get a good crowd on Saturday for the Aberdeen match. We should get at least 5,000 Clydebank fans alone, especially as both sides had a good result on Saturday.

I'm confident about the Aberdeen game, as I am with any game. There's no use in going into a game unless you are confident. We'll let Billy McNeill and his men do all the worrying. It's their first visit here, so the pressure will be on them.