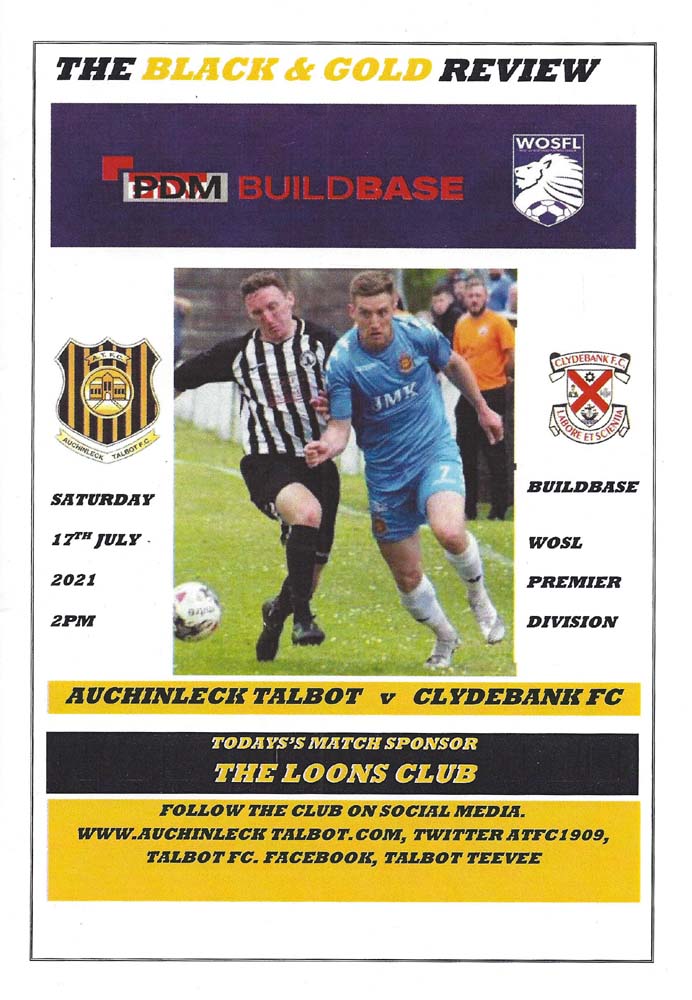 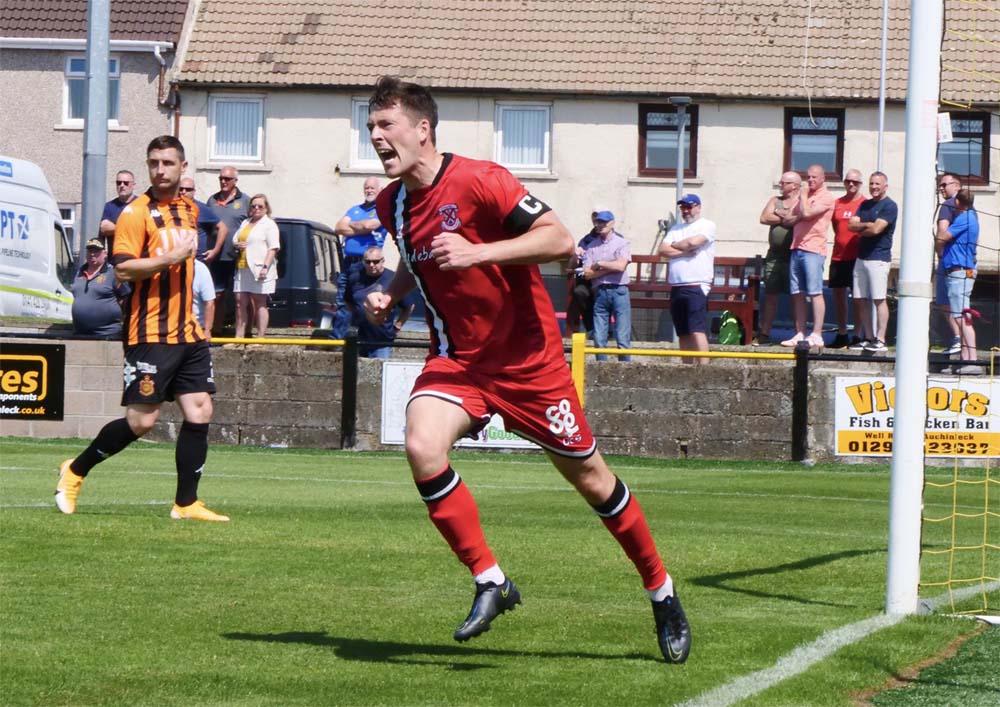 Clydebank returned to competitive action for the first time since December last year as the Covid pandemic hopefully begins to recede. The Bankies couldn’t have been handed a much harder start than facing Auchinleck Talbot away from home at Beechwood Park. This is a team who have only lost two league matches in the past two seasons and are most people’s favourites to win the West of Scotland Premier League.

However, the Bankies have been quietly building in the background and the teams served up a thrilling afternoon’s football in glorious sunshine which quite correctly ended up in a draw with two goals apiece.

To be honest, there wasn’t an awful lot of good football played, but one thing the Bankies have learned is if you don’t compete with Talbot on a physical level then they will steamroller you. Clydebank have been on the wrong end of some hidings at Beechwood, in part due to a lack of physicality. This was a very different Clydebank side who chased every ball and there were no signs that Gordon Moffat’s players were going to give the game away cheaply.

After a minute’s silence was observed for the people who lost their lives due to Covid, the two teams went right at it. Clydebank took the early initiative and forced three corners, but the deliveries were poor and continued to be throughout the game.

Talbot forced their way into the game and it took until the quarter hour mark for a shot at goal. A free kick from the left was only half cleared by Darroch, and it fell for Boylan who managed to get a shot away from eight yards out, but it luckily hit the outside of the post.

Only a few minutes later the Bankies took the lead with a sweeping move on the break. Gallacher picked up the ball midway in his own half. He sprayed a superb pass out to the right wing for Mulcahy. The Bankies striker did the right thing by whipping the ball early into the box. McPherson wary of Nicky Little arriving on his blind side slide in to cut out the ball, but only succeeded in diverting it past the Helpless Leishman.

There were only two other chances of note in the first half. Firstly, the home side with a typical long diagonal ball over the top seemed to catch out Darroch and Byrne, possibly due to the stiff breeze. The ball held up nicely for the onrushing McCracken who thundered in a low shot which had Donnelly diving full length to turn round the post.

Clydebank replied down the other end, when Lee Gallacher, the most skilful player on display, latched on to a Mulcahy knock on. Gallacher took the ball in and let fly and forced Leishman into a terrific save low on his left hand side.

The game was probably more open in the second half as Talbot tried to reverse the scoreline, and three goals were scored in a nine minute spell.

After Mulcahy had a speculative effort that sailed over the bar, the home side drew level after 52 minutes. It was a bit of a disaster for Chris Black, who otherwise had an excellent game. Around 20 yards out from his goal he dithered as he let the ball bounce in front him several times, and was robbed by Healy. The Talbot midfielder wasted no time in side stepping and lashing the ball low into the net from the edge of the box.

Talbot’s tails were up now, and for a spell the Bankies came under a little bit of pressure. Just six minutes later Talbot turned the game on its head. For the first time in the match Matt Niven was beaten to a high ball, and the rest of the Bankies defence was posted missing as Samson raced through unchallenged and fair rattled the ball past Donnelly into the net.

In the past, Clydebank teams would have crumbled at this point, but not today. Within three minutes it was all square. Nicky Little, who didn’t have much goes his way in this game, picked up the ball and sent it wide to Paul Byrne on the left hand side. From around 35 yards out, the full back delivered a wonderful cross into the box. It was one of those crosses you knew was a goal before Chris Black even put his head on it. Redeeming his earlier mistake, Black guided the ball perfectly past Leishman.

The game ebbed and flowed after this, with Clydebank having a fair share of the attacking possession. Neither team could find the key to the others defence, though there were a few tense moments for both teams to contend with. None more so, when a bit of drama in the Bankies box saw the ball loop up and hit the top of the bar.

At the end of the game a draw was a fair result. On this evidence, Talbot will be there at the end of the season when honours are being handed out. They are an incredibly competitive side, and they carry no passengers. You know if you get a result at Beechwood Park you have earned it.

The Bankies have been tipped to do well this season, and the early signs look promising. Gordon Moffat and his coaching staff have brought a whole new level of professionalism to the club. The players have responded to him so far with higher levels of application and that has been a thing often missing in the past. Today was only one game, however, and this result needs to backed up against Cumbernauld United on Wednesday who look to be a much improved outfit from last season