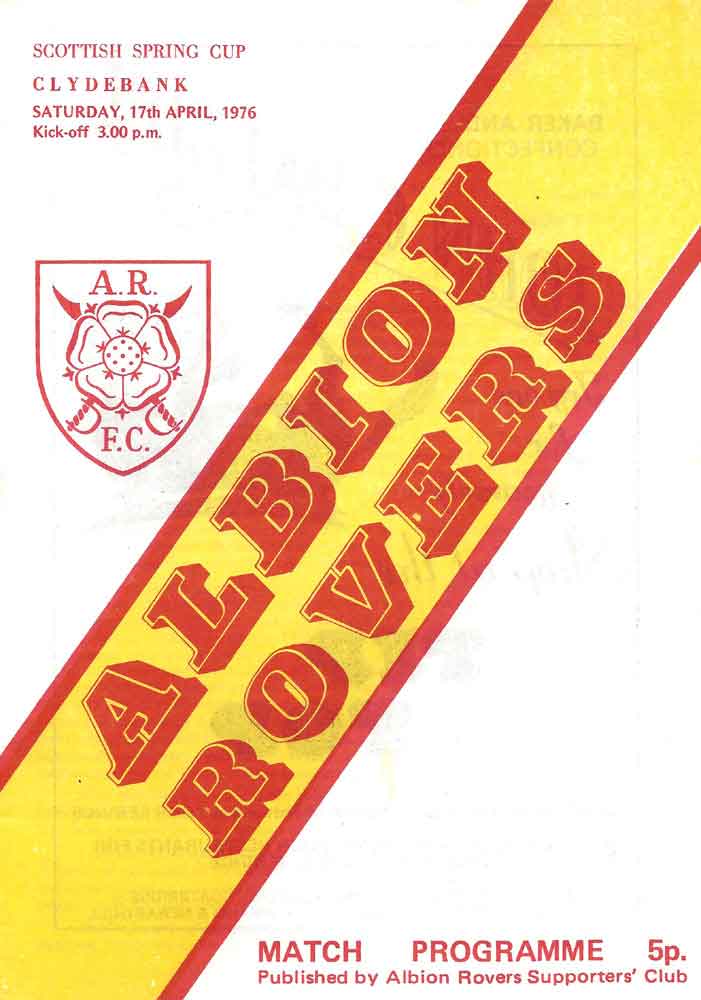 With their most inept display of the season, Bankies went down to Albion Rovers last Saturday but thanks to the 4-1 victory from the first leg they still qualified to meet East Fife in the quarter finals.

With Hall and Henderson unfit, Bankies brought in Billy Fanning and Bobby Provan,and Jim Gallacher took over from Roddy McKenzie in goal. With a three goal lead it should have been a formality for the league champions, but they appeared to treat the game too lightly, never striking any rhythm, and allowing Rovers to do all the attacking.

The pitch was a disgrace, resembling a field with grass almost ankle deep, and the pattern of play was summed up in the very first minute.

Rovers attacked from the kick off, but a long clearance caught the home defence out, Larnach raced through with no one near him,but made a complete hash of this golden opportunity by failing to control the ball. He allowed the defence time to get back, and in the end failed even to get his shot on target.

The centre had a chance to redeem himself in the 15th minute when he took a Fallon lob just six yards out, but he failed to control the ball and the opportunity was gone.

Rovers were having a go at reducing the leeway without making any real impression on the Clydebank defence, but the leniency of Mr Alexander gave them a soft penalty in the 26th minute.

Muldoon was making ground on the left side of the penalty area when challenged by Sam Goodwin, and the referee surprised everyone by pointing to the spot.

Doherty stepped up to make no mistake with a hard shot into the roof of the net.

This should have shaken Bankies into action but it was Rovers who continued to force the play. A great run by Sermanni ended with a cross that was fractionally high for the unmarked Brogan.

One hoped that Bankies would improve in the second half, but after a fine run by Fallon which ended in him him shooting over, Bankies retreated into a defensive shell, intent on hanging on to their lead.

Muldoon was booked in the 65thminute for a foul on Lumsden as things became a bit rough, then during an all out assault on Bankies goal, referee Alexander again awarded a penalty to the home side. Doherty made another excellent job from the spot, and Bankies were under real pressure now.

Browning replaced the ineffectual Cooper, as Bankies desperately held out, and McGuigan became the second home player to be booked after a lunge at McCallan.

The home side looked dangerous and it took a brilliant save from Gallacher to foil O'Connor as the sub ran through. With minutes remaining, a scramble in Bankies goal area saw shots raining in from all angles, but desperate defending kept the ball out.

The game finished on a sickening note, when McLean followed through as Gallacher dived for a loose ball and appeared to kick the keeper on the back of the head.

The Clydebank players were justifiably annoyed that the winger was only booked; he should have been off the park.

Gregor Abel took over in goal for the dying minutes, and the final whistle sounded with the Bankies fans thanking their lucky stars that Jim Lumsden had scored that magnificent last minute fourth goal in the first leg.

Not one of Bankies best days which proved that they are a far better team going forward. The quarter final pairing with East Fife will give Bankies a pointer as to how they will fare next season, and hopefully a fighting chance of going on to the semi-finals.

Bankies will certainly be pleased not to be playing Albion Rovers next year,for the Coatbridge side seem to have a personal vendetta: 12 of their players have been booked in the last three meetings.