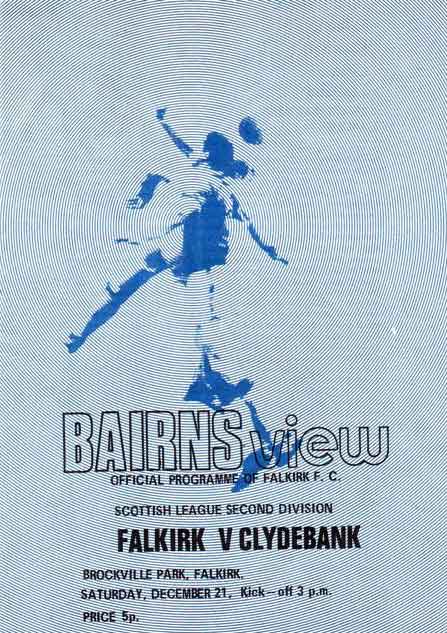 Six in a row! Six in a row! Bankies fans could be excused from singing the praises of their gallant team after witnessing another fighting victory at the expense of the strong going Falkirk.

Apart from their supporters who followed them, few people gave Bankies much chance of success at Brockville where the Bairns had dropped only two points all season, scoring 28 goals and conceding only six.

A strong wind and over 2,000 fans were, behind Falkirk as they started off in determined mood with Shirra and Gibson promoting many attacks. They soon found out, however, that the strong Bankies defence were tackling first and asking questions later.

Despite vocal backing, the home side were not really using the wind to great advantage and their double spearhead of Lawson and Whiteford were well policed by Fallon and Fanning, surely the best double centre ball partnership in the Second Division at the moment.

A great chance fell to the Falkirk centre in the 20th minute when a lucky break of the ball left him with a clear shot at goal. To the dismay of the home support, however, he sliced his shot into the side netting.

Gradually Bankies pulled themselves back into the game and Donaldson had to look smart to smother a fierce 20-yard drive from Davie Cooper.

The all-important goal arrived in the 38th minute when Markie, deep in his own half, attempted a passback to his keeper. Mike Larnach cleverly intercepted and as he picked his spot in the net, the big Falkirk defender blatantly pulled him off the ball.

To Clydebank's horror the referee awarded a free kick on the edge of the box but amidst strong protests he consulted his linesman and correctly changed his decision to a penalty kick.

Phil McGovern looked the coolest man in the park as he stepped up to send a perfect shot into the corner of the net. There was no way keeper Donaldson could have saved it.

Bankies resumed for the second half with the wind behind them and they set up a series of attacks on the Bairns goal. Tragedy struck, however in the 52nd minute when Phil McGovern clashed with goalkeeper Donaldson and was stretchered off with a broken left leg. Ian Law substituted.

On the hour it looked as though Bankies balloon had finally burst when the referee awarded a penalty to Falkirk after Shirra had made the most of a tackle by Jim Fallon. Gibson stepped up and sent a shot to the left of the goal but big Jim Gallacher dived across and pushed the ball away. A superb save.

This acted as the spur that Bankies needed and they showed great character to come back after losing such a valuable player and take the game to Falkirk.

Law almost increased Bankies lead in the 70th minute when his shot was deflected and Donaldson, at full stretch, only just managed to push the ball on to the top of the bar and over.

The game was now a ding dong battle and no sooner was Gallacher making a point blank save from Lawson at one end than Donaldson was diving to save a great shot from Cooper.

In the latter stages Bankies were well on top and, but for some incredible goalkeeping from Ally Donaldson in the Falkirk goal, could have won by four or five clear goals. The big keeper looked unbeatable as first Law then Cooper saw fierce shots brilliantly saved.

Gregor Abel, having a superb game against his old team, broke clean through from midfield but Donaldson again saved Falkirk with a brave diving save at the full-back's feet.

Bankies were happy to hear the final whistle for they had achieved another fine result against the odds. It was a tense and exciting match and though they did have their moments of danger in the end they won convincingly and only some breath-taking goalkeeping kept the score tight.

It was a great performance to win away from home to a team who are strongly tipped to finish in the top six and indeed to reduce them to a very ordinary looking team.

If one picks out Gallacher, Abel, Fallon, Cooper, and especially Fanning it is because that, while the rest of the team were good, these five were absolutely brilliant.

Tomorrow sees another home match against third in the table, Queen of the South, and it promises to be quite a match. Bankies supporters are convinced that the present team are as good as any seen at Kilbowie and their recent run of success is believed to be a club record. So much has been achieved but it must be, continued tomorrow, so how about it Clydebank? Turn out and give this team your support, they certainly deserve it.

By the way, there is no truth in the rumour that Bankies are ready to make a bid for Dumbarton Football Club to see them out of their present difficulties. However, any Dumbarton supporter who wishes to come along to Kilbowie tomorrow and see a good, winning team is most welcome.

Finally, I am sure that every Clydebank fan will join with me in wishing Phil McGovern a speedy recovery. He will be badly missed as he has been an important part of the team in recent weeks, failing to score in only one of the past six games.