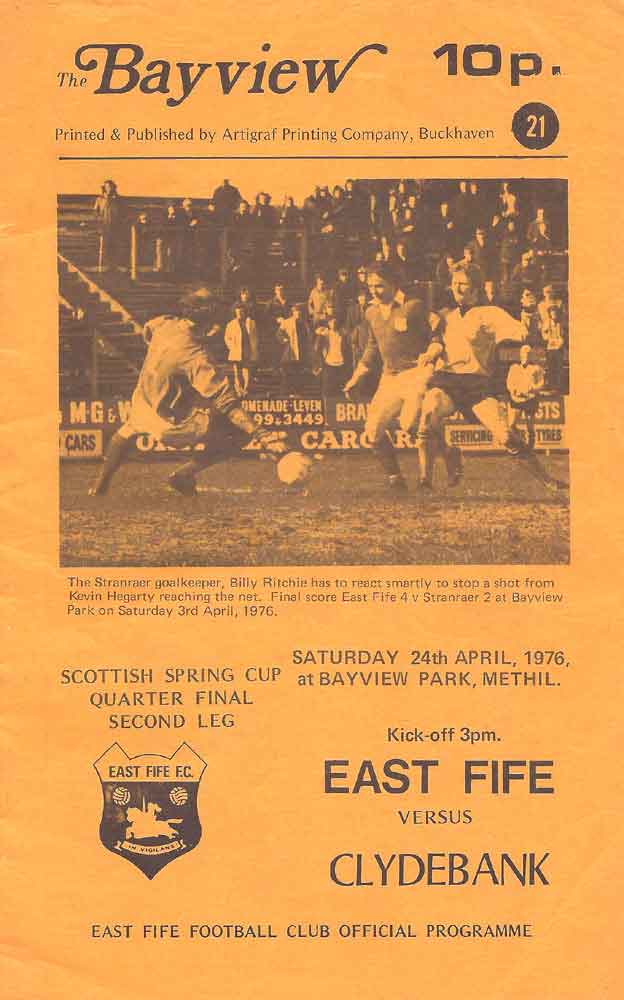 Bankies marched through to the Spring Cup semi-final with a tremendous performance after an enthralling encounter with East Fife that thrilled the 3000 crowd. After 90 minutes of superb entertainment the scores were level and when extra time brought near things at both ends, but no goals, a sudden death penalty decider had the fans at boiling point.

East Fife were unchanged from last wee's first leg but Bankies recalled Jim Gallacher in goal, and as expected, Billy McColl was on from the start in place of Sammy Henderson.

Play started at a cracking pace with the Fifers attacking down the slope in an attempt to wipe out the one goal deficit, but Bankies had not come to defend and counter attacked at every opportunity.

McPhee hammered a 30 yard fee kick past the defensive wall and Jim Gallacher was at full stretch to save by the post. Bankies reply was tremendous run by Davie Cooper that split the defence and his slip to Dougie Hay was quickly played on to Mike Larnach but he delayed his shot and the danger was cleared.

Hegarty burst clear on the left and his cross was brilliantly plucked out of the air by Jim Gallacher as O'Connor raced in.

It was a tremendous tussle with no quarter asked or given and Gregor Abel sustained a nasty gash on his face in the 23rd minute, but he courageously played on with blood streaming down his face.

In the 25th minute, Bayview erupted when the Fifers cleared the arrears. Hegarty sent a long ball into the area and when Kinnear headed back across goal, Gallacher hesitated for a split second and O'Connor raced in to head strongly into the net.

Bankies refused to be down despite this setback and from then until the interval they dominated play with some great football, but the excellence of McGarr and Clarke thwarted every attempt. Norrie Hall came desperately close when a brilliant move by Davie Cooper ended with an inviting cross that was a fraction high and the big full back could only head over the bar.

The first half had been thoroughly enjoyable but the second was truly memorable as both teams went all out for the winner. Davie Cooper blast a 20 yard drive just wide of the right hand post then, in the 52nd minute, in an all out assault on the Fifers goal, Billy McColl saw a net bound shot kicked off the line by Clarke and when Davie Cooper shot the rebound for goal, McGarr dived to bring off a wonder save.

East Fife had Rankin on for Rutherford but Bankies continued to press and Clarke blatantly handled a Dougie Hay header with McGarr on the ground, but Mr Gordon waved play on. The ball broke to Mike Larnach, but McGarr again saved his side with a brilliant parry from the centre's shot.

Things were rough as both teams fought for every ball and Rankin was booked for a foul on Cooper and McColl foolishly got involved and also found his name in the black book.

As the game entered the final five minutes, Gallacher blocked a Kinnear shot then brilliantly finger-tipped a vicious 18 yard free kick by McPhee over the bar.

So, after 90 minutes of pulsating soccer the scores were tied and off we went into extra time with Ian Browning replacing Mike Larnach. Bankies had been playing magnificently but had just been unable to finish off their great outfield play and the fans looked to the sub to snatch the all important goal. It was the Fifers who had the better of the opening half in the extra period however, and McIvor hammered an 18 yard drive just wide.

The teams turned for the final 15 minutes and with the slope in their favour, Bankies full time fitness began to tell as they ran at the Fifers and gaps began to appear.

Davie Cooper left a string of defenders beaten but despite all out pressure the Fifers desperately kept their goal intact. Kim Lumsden stood in disbelief as he shot, only to see Clarke yet again clear off the line/

East Fife, were not finished yet however, and Kinnear almost broke the bar with a tremendous drive from the edge of the box.

Back came Bankies and it was their supporters who gasped in astonishment as Ian Browning chested down a Jim Lumsden cross, rounded McIvor, and hit a glorious shot that cannoned against the underside of the bar and stayed out.

The last chance of this memorable match fell to the Fifers when O'Connor sent a peach a pass ahead of Love but Jim Gallacher blocked the subs shot with his leg and the final whistle sounded to bring this brilliant game of football to an end.

So it was all down to penalties as the fans raced behind the goal. East Fife were to be first and McPhee hammered the first one into the net. Up stepped Davie Cooper and he equalised with a low shot to the keeper's right.

O'Connor then crashed the second high into the net but Norrie Hall placed his effort in the corner of the goal to make it 2-2.

Tension reached fever pitch as McIvor sent his shot against the right hand post. Jim Lumsden confidently placed his shot well out of McGarr's reach and Bankies were ahead.

Then Hegarty stepped forward and the Bankies players and fans went wild with delight as Jim Gallacher dived across goal to bring off a great save. Up stepped Billy McColl and when he crashed his shot into the net, Bankies were through to the semi finals. The news that they were paired with local rivals Dumbarton was the icing on the cake.

This was a tremendous advertisement for Scottish football and the best possible answer to those who have knocked the Spring Cup since it began. In a great season for the Bankies this was probably the most exciting and entertaining match they have played and it was sad really that either team had to lose for both had given their all.

In a great team performance everyone deserves praise but Gregor Abel should get a medal for playing on. With blood running down his face he gave everything he had and played one of his best ever games in a Clydebank jersey. If this was a sample of first division football then roll on next season for this was magic.