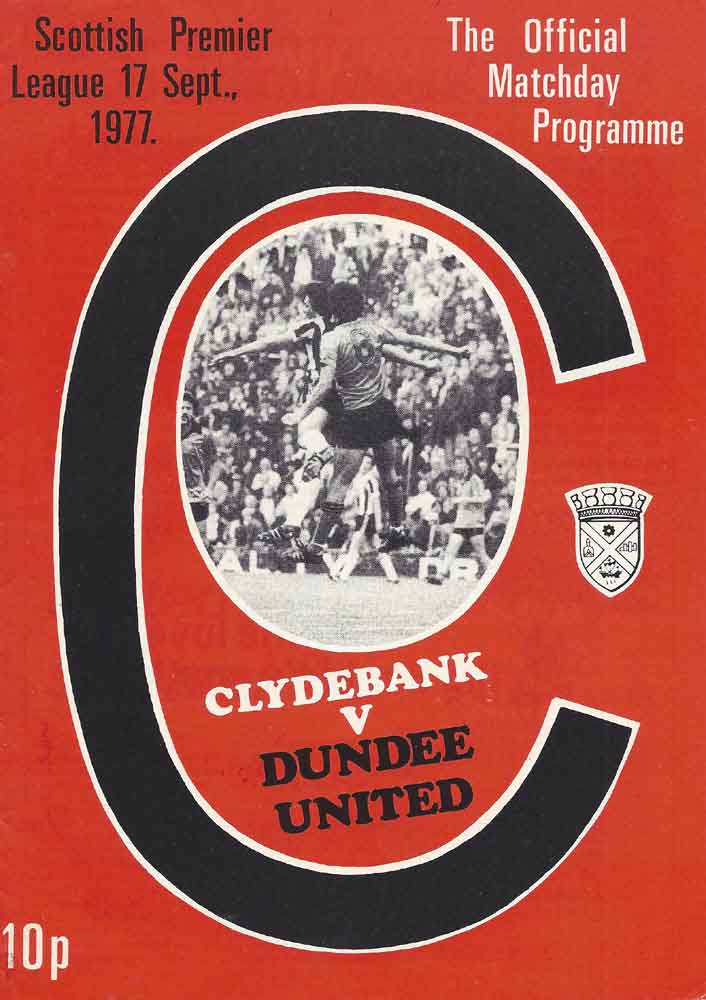 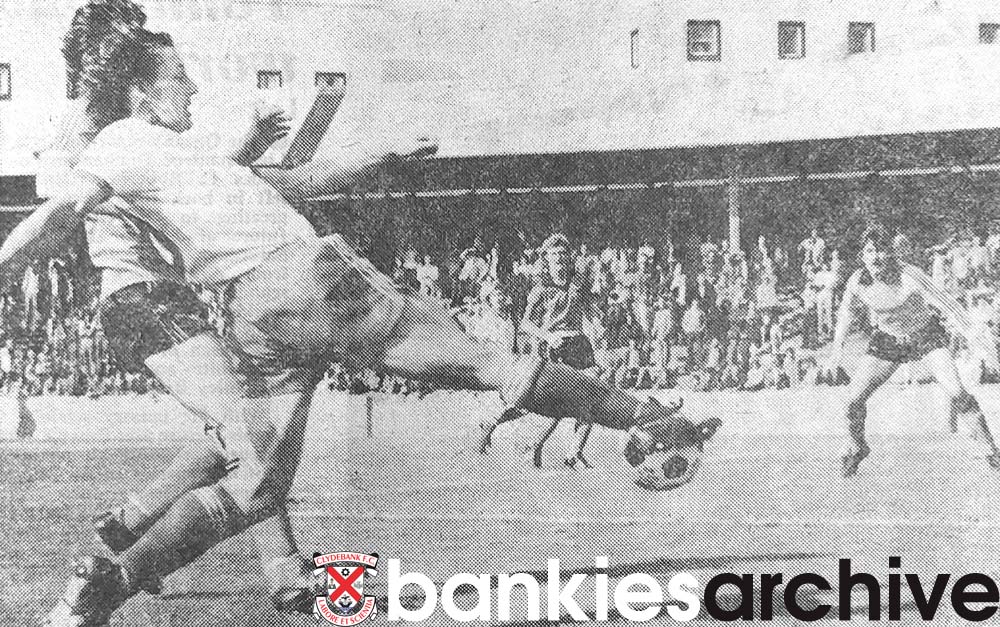 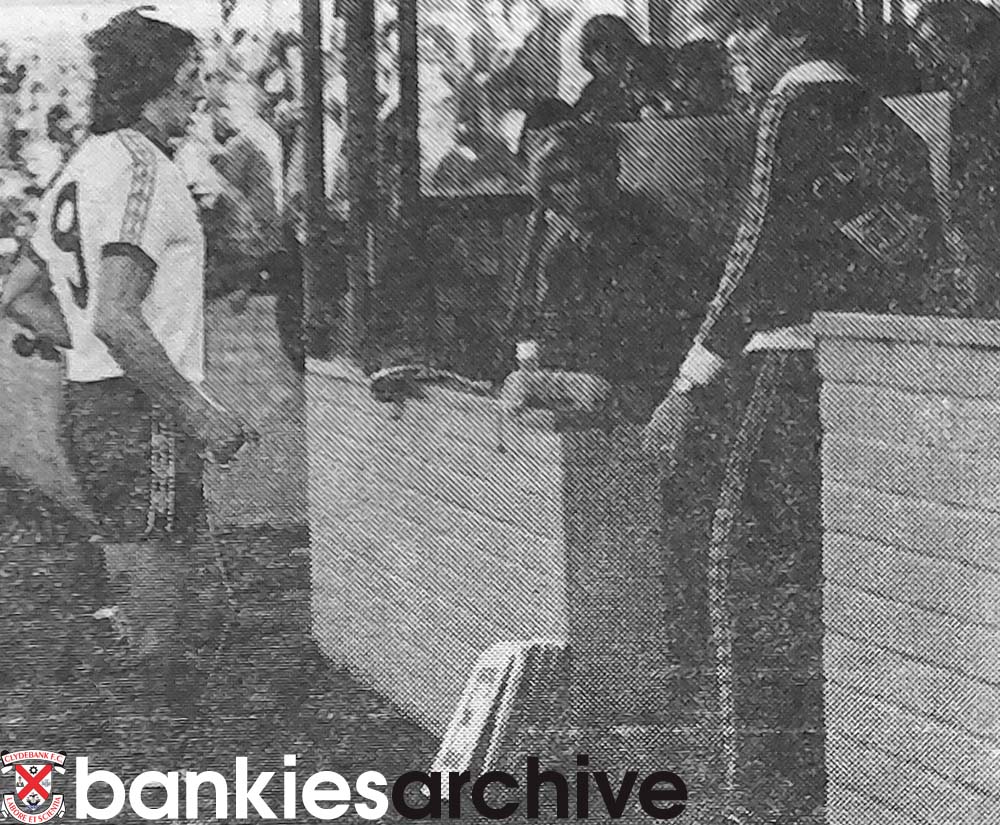 Two defensive errors and a superb solo effort by Fleming gave the Tannadice men a thoroughly deserved victory over Clydebank at Kilbowie on Saturday. In a game which saw Bankies star striker Larnach dismissed, Dundee Utd were always were in control - playing a pleasing brand of football that makes them one of the country's most attractive sides.

Bill Munro made several changes for the game. Out went Gerry O'Brien who was suffering from a sore back. Hall and Lumsden were dropped in favour of young John McCormack and Dougie Hay with Ronald replacing O'Brien. Captain for the day was Tom Callaghan.

Gallacher was the first keeper in action when he brought off a great diving save from a Robinson dipper.

At the other end Hay set up a good chance for Larnach but he shot wildly over the bar from 10 yards. Neither side showed true superiority in the first 15 minutes but as time wore on United took control especially in midfield where Billy McColl looked sadly out of touch.

United took the lead in the 29th minute through Paul Sturrock. He was left completely unmarked out on the right of the box and he had time to pick his spot in the far corner before shooting. The marking here was non-existent

A minute later Gerry Ronald almost squared things with a super swerving shot but his effort was just wide.

Just before the interval Hegarty missed an open goal for United after a horrific defensive mix-up.

Soon after the break Lumsden replaced Gerry McLauchlan and this immediately made Bankies look a much more urgent and capable side.

However Bankies got a shock when the Dundee men increased their lead. Gallacher failed to hold a Fleming cross, the ball broke in front of goal to Bourke who poked it into the net.

Then came two minutes of drama which made the Bankies fan sand the population of the press box furious.

Mike Larnach challenged for a 50-50 ball in the United area. He lunged for it and the Dundee man fell. Incredibly Mike was shown the yellow card. Almost immediately after this Mike was again challenging for the ball. He made an honest attempt to tackle and again the Dundee man fell. Mr. Ferguson had no hesitation in sending Larnach for an early bath - ONE OF THE MOST FARCICAL REFEREEING DECISIONS I HAVE EVER SEEN.

Fleming ran 50 yards with the ball before rounding Jim Gallacher to drive the final nail in Bankies coffin.

The £100.000 Clydebank received from Rangers for their striker, Davie Cooper, hangs like a millstone round their neck, threatening to drag them back into oblivion, from whence they rose in two glorious seasons.

Their manager, Bill Munro, has the problem, pleasant to some, of having a healthy bank balance. But he has no one to spend it on. "Every time I make a signing inquiry the asking price is grossly inflated - simply because everyone knows we have money," Munro told me after his team had crashed at Kilbowie. .

He wants to buy a defender of class, and on Saturday's evidence he is not a bad judge. They had nobody powerful enough in the air to counter the menace of United's new signing John Bourke, who scored once in a defensive melee and laid on the opener for Sturrock, raking out a long leg to give him the ball when a Fleming shot broke off a Clydebank defender.

Bourke, who has suffered from flu all week, was substituted late on. But United's manager, Jim McLean, was delighted with his performance, which adds a new dimension to the already powerful Tannadice arsenal - even if Bourke is, as Bill Shankley is alleged to have assessed of John Toshack, "great in the air but restricted on the ground."

Before his early departure Bourke was booked - just one of a series of mysterious decisions by Mr Ferguson, who succeeded only in adding controversy to the tie, He cautioned Clydebank's striker, Mike Larnach, for an innocuous foul on Hegarty and within one minute Larnach was on his way to the dressing room, after an equally fair looking challenge on Addison.

"I've been booked once in my career at Kilbowie," Larnach told me, "... then twice in a minute! I hope the club will back me in an appeal." Munro confirmed that he would do just that.

Clearly, though, the Kilbowie manager has a crisis of confidence on his hands. "The longer we go without a win, the tougher it gets for the players. But a win is all that we need - I'm convinced of that. Fleming, however, rubbed salt in his wounds with a searing run from just inside the Clydebank half before he rounded Gallacher to score a third goal.

United look increasingly like title contenders. “We were rubbish, boss," was the players' dressing room verdict before McLean could get in a critical word. If a three-goal win is rubbish by their standards, the title could yet end up at Tannadice this season.