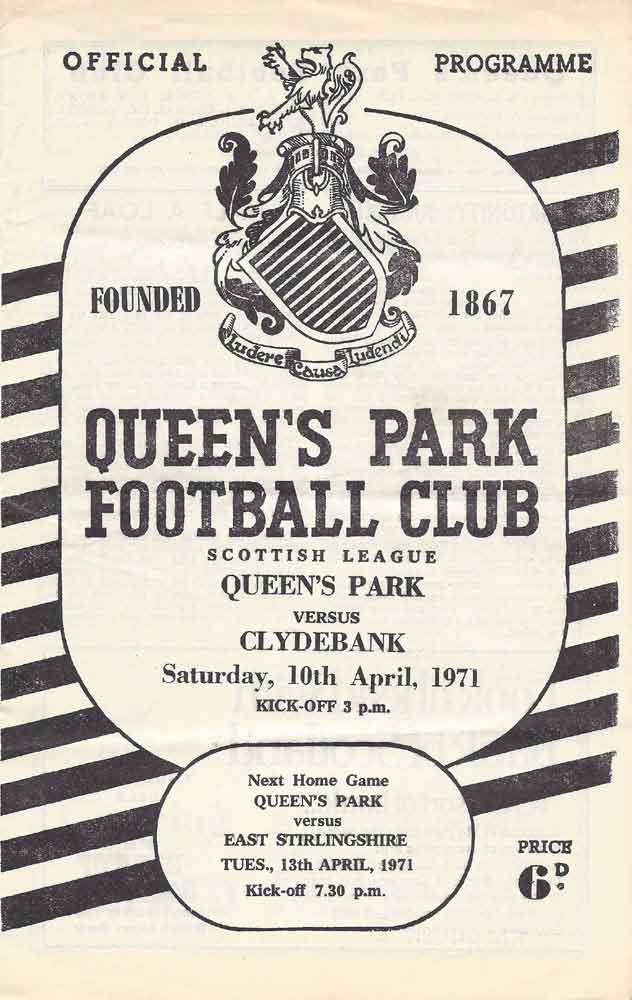 This game only came to life in the second half, and even this was due more to some rough play than to football skills. A draw was a fair result, since neither team deserved to win.

In the first fifteen minutes, the teams seemed content to stroll about and enjoy the sunshine. The first real chance of the match fell to Caskie in the 16th minute. Kane sent him clear with a good pass. Taylor came out to dive at his feet, but the ball broke for Caskie, who hit the post from an acute angle.

Soon after this Love took a free kick on the right. Taylor rose and punched the ball hard. Queens raced down-field, with the Clydebank defence stretched, but again they delayed too long and a possible chance was wasted.

Five minutes from half-time Bankies almost scored. From a free-kick in front of goal Caskie touched the ball for Love to shoot. Taylor caught the ball, but it dropped behind him, and bounced on the line before he managed to grab it again. Some Clydebank forwards claimed the ball had gone in, but referee Padden was having none of it.

Queen's Park's best shot came on half-time. MacKay ran on to the ball just outside the area and sent a vicious shot just over the bar with McDonald well beaten.

Queens, whose build up in front of goal throughout the first hall been lamentably slow, began to with more urgency in the second half.

In the 59th minute, Fearn rushed on to a Thomson free-kick, but he seemed to come in too fast and headed the ball awkwardly past. Clydebank's defence looked suspect here.

Fearn repeated the move two minutes later, although his header was nearer this time.

A Gray mis-kick let Whyte through, but McDonald rushed out to boot the ball clear.

Kane almost scored in the 65th minute, when his neat overhead lob was punched over by Taylor. Kane was not denied a goal for long, however, as a minute later he put Clydebank into the lead, with a header at the post, following a hard cross from Caskie.

Clydebank's lead was short-lived, as Queens equalised five minutes later. A Whyte corner was knocked on to Morrison who scrambled the ball into the net.

Things began to get a bit rough, and referee Padden spoke to several players before finally booking Love for a foul on Mackay. Kane and Wilson in particular received some rough treatment from the home defence.

The game then petered out into a scrappy exhibition, with neither side showing any signs of producing a winner.