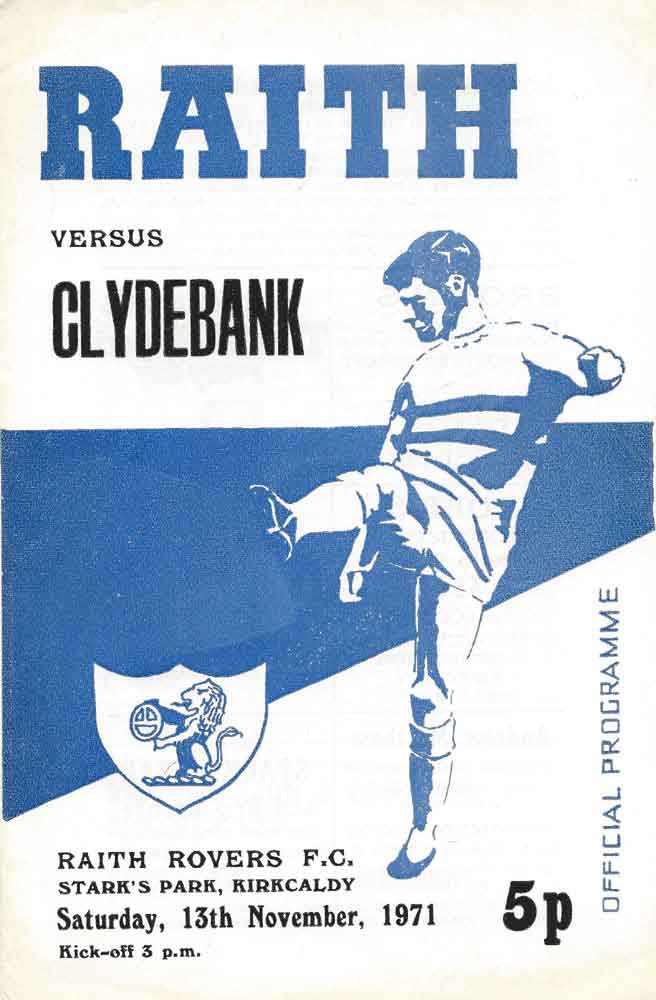 With five of the 15 playing staff on Clydebank's books suffering in one form or another from flu, the Bankies must really have been expecting a drubbing from Raith Rovers. The Bankies fans must also have been wondering before the game what sort of team would be fielded. But the situation was not so desperate as was first feared and a team (fit or not) was fielded.

Tucking my football boots underneath my seat in the press box. I sat back expecting to see the strong looking Raith team tear the Bankies to ribbons.

But as things turned out, it was Clydebank who had the upper hand in what could hardly be called an exciting first half. In actual fact, if you were none the wise you would actually have thought that it was the Raith team who were suffering from flu.

Their build up to attack was so slow and deliberate, they were practically reversing, whereas the Bankies were pushing the ball about a lot faster and with more precision. But the action was reversed for the second hall.

After incessant pressure, Raith took the lead through Wallace but a quick one-two from Bankies, followed by a third, just to rub it in, sent the points home to Kilbowie.

Making one goal and scoring another was winger Ian Currie. He was all over the park trying to satisfy an insatiable thirst for the ball. Don't let me give the impression that this was a one-man victory. Nothing could be further from the truth. It was a splendid team effort. Not many teams can boast a win away from home at Raith Rovers ... and not many will.

With Peter Kane and Danny Gray sidelined with 'flu, Graham McFarlane and Bobby Love were drafted in at centre-forward and inside-right respectively. McFarlane settled in quite quickly and proved very effective until he limped from the park in the second half to be substituted by Tommy McGhee. Bobby Love had an indifferent start-his first two passes going straight to opponents. But he, too, settled in quite quickly and played very well.

The current form lapse of Jimmy Caskie seems to be disappearing. He gave one of his best displays in recent wecks but still managed to miss a few chances that the Jimmy Caskie of on-form fame would have rattled in, no bother, It was Caskie who could have given the Bankies a five-minute lead but after Graham McFarlane had headed down a Mike McDonald clearance to Caskie's feet, the winger sent his shot over the bar from quite close range.

Two headers in the seventh and 1 16th minutes came too close for the Bankies' comfort. Wallace headed a Lindsay free kick just round the post and outside-left Robertson scraped the white paint with a header from a McLeod cross.

Raith kept using their heads and in the 21st minute outside-right McLeod claimed his header had crossed the line. A cross from the left was headed almost at point-blank range by the winger at the far post but his direction was wild and the ball went straight to McDonald ... standing at the opposite side of the goal. However the Raith man's claims were in vain.

The best chance of the first half fell to Caskie. (He won't speak to me if he ever reads this). The Raith defence stood waiting for the ref's whistle as Caskie and McFarlane seemed miles offside as the ball went through ... but the referee didn't share their view. He allowed play to continue and Caskie bore down on the goal but McDermott came right off his line to take the ball from the winger's feet right at the edge of the box. But even then the danger wasn't averted. McDermott could not hold the ball and it fell again to Caskie but he had his back to the goal and his parting shot went well past the post.

Raith's manager, Bill Baxter, must have had a few strong words to say to his players at half-time for they completely shrugged off their first half apathy and threw themselves en bloc at the Clydebank goal early in the second half.

They rained shot after shot from all angles on the goal around McDonald but all were either too high or too wide. Just as it seemed Bankies might weather the storm unharmed, Raith scored. A shot from inside-right Georgeson cannoned off McDonald's leg and Wallace dived full length to head the ball in to the gaping net.

Tommy McGhee came on for Graham McFarlane in the 64th minute and took over at centre forward.

It was now the Bankies' turn to do the attacking and after a few near misses, Alan Munro put them back in the game in the 76th minute, Goalkeeper McDermott could not hold a left-foot shot from Currie and Munro was on the spot to ram home the rebound.

Four minutes later McGhee almost burst the net for goal number two. Munro made the running up the right wing before sending a low and hard cross in front of the goal which McGhee met first-time to lash high into the net.

If the home fans and players were feeling a little disappointed it was nothing compared to how they felt three minutes from the final whistle, Raith were pressing home another series of attacks when Jim Fallon cleared the ball into the home side's half with a mighty kick. Centre half Innes stopped the ball and as he drew back his right foot to slam the ball back towards McDonald ... he slipped.

Currie was in like a shot, ran the ball round McDermott and practically walked it over the line for the final goal.