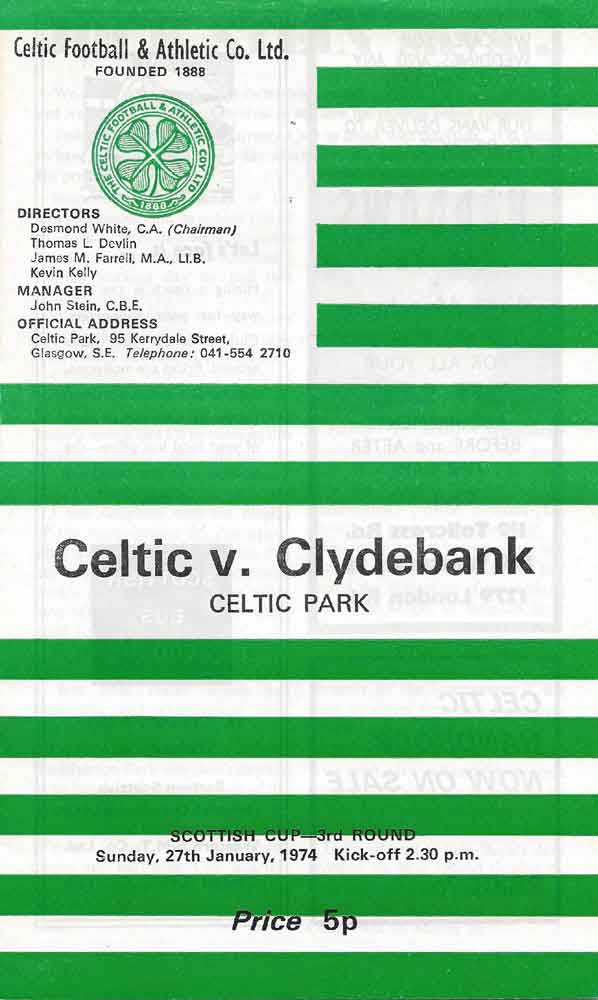 Not even the most optimistic Bankies supporter could have expected the scoreline from this match to read differently (or favourably) from the "real" thing. Indeed there were those who travelled to Parkhead on Sunday convinced that Celtic would try and beat Rangers' tally of eight, scored against Queens Park the previous day. And on this history-making day Celtic showed that there would be no slip ups against the weaker opposition and within five minutes were two goals up.

It was fitting that the prime instigators of Sunday football, Clydebank, should be among the first to kick-off a Sunday match. The Parkhead gate of 28,000 was more than double the crowd the teams would have expected if the game had been played on Saturday. And throughout the country the story was the same greatly improved gates for the Sunday fixtures,

I would like to think the Scottish football legislators will give the experiment a while longer, for not only does it give more fans the opportunity of attending matches, but the financial gains alone must surely give a much needed “ shot in the arm" to the smaller clubs who are short of a “few bob".

The Bankies for their pains will receive over £3000 as their share of the gate. And that itself must take the sting out of the six goals. After the game Bankies boss Jack Steedman talking of the open way his team played, said: “Had we been going to Parkhead looking for a point we would have made it much more difficult for Celtic by closing up at the back. As it was we had Jim Fallon and Billy Fanning marking Kenny Dalglish and Dixie Deans one for one, And Davie Mitchell had to face Bobby Lennox - one of the fastest things on two legs."

And it was Lennox and Deans who did the most damage to the Bankies, scoring five of the six goals between them. Their pace and shooting power showed why Celtic are the force they are today in football.

The Bankies stars were in defence where Fallon and, in particular Fanning played their hearts out and managed to squeeze some applause from the Partisan home crowd. Up front Ian Currie, making his return to the first team after quite a while, showed up very well and didn't seem at all overawed by the opposition.

Mike Larnach tried hard and managed to get one or two shots in but against the experience of McNeil and the physique of McCluskey, he didn't really get things his own way too often.

I was very disappointed in the performance of Sammy Henderson who since his recent injury, has been struggling to regain his previous form. His urgency and nonstop effort is being sorely missed in mid-field.

Currie and Larnach apart, the forward line had little penetration and it surely must be time for a re-think at Kilbowie with some more new faces coming into the side.

Goalkeeper Jim Gallacher couldn't be faulted for any of the goals, though he was caught off his line once or twice. Certainly all he could do in the third minute was pick the ball out of the net after Dixie Deans flicked home a low, hard cross from Lennox,

And two minutes later the centre forward rounded off an almost identical move by stabbing the ball over the line for number two despite a desperate challenge by Gregor Abel.

It was the sun which robbed Deans of a hat-trick in the seventh minute. A cross from Harry Hood found Deans on his own in front of goal - but he had his hands in front of his eyes, blinded by the sun, and the ball bounced harmlessly off his head and past for a goal-kick.

And guess who rattled the bar in the eighth minute with a great shot from the edge of the box - that's right, Dixie Deans.

But just to show there were two teams on the park and not just one player, the Bankies, in the forms of Mike Larnach and Ian Currie, launched an assault on the Celtic goal. It ended when Larnach shot weakly into the arms of Alistair Hunter.

Two minutes later Currie let fly from 25 yards and Hunter had to dive sharply to his left to stop the ball sneaking in at the post. In no time at all the action was back at the Clydebank end when Hood sent over a high cross from the bye-line. With the defence every way but the right way, Lennox headed the ball powerfully down and it bounced into the roof of the net.

Deans came back into the limelight in the 38th minute when he won out on a duel with Fanning and struck a well hit shot into the back of the net for his third and Celtic's fourth goal.

Not content to rest on his laurels, Deans had another go just before half-time with a chip shot over the head of Gallacher. But his luck was out and he could only watch as it struck the bar before bouncing into the arms of the goalkeeper,

Two minutes into the second-half. Mike Larnach had a powerful angular drive palmed out from under the bar by Hunter. Currie, trying to follow up, put the ball past.

The inability of the Clydebank defence to clear their lines cost them dearly in the 54th minute when, following a bit of a scramble, Lennox rammed home a shot to put the Parkhead side five up.

Just after the re-start, Joe McCallan came on for Mike Larnach.

A quick upfield turn of speed by Tom Callaghan took him past the defence and his cross was met by Deans who tried to chip it first time into the net. However Dixie's luck still wasn't with him and once more he could only look on helplessly as the ball struck the bar and was gathered by Gallacher.

Celtic substituted Vic Davidson for full-back Danny McGrain who had taken an ankle knock early on in the game. And three minutes later the sub robbed Davie Mitchell in the box before stroking the ball past the advancing keeper. Whether or not this slip was the main reason, Mitchell came off a minute later to be replaced by Ian Law. Sammy Henderson moved to right-back with Law operating more or less on the right wing.

So with both their substitutes on, Clydebark took a gamble. And it paid off with barely a minute of the game to be played. Law sent a cross over from the left, Me Callan tried a shot first time from the edge of the box which struck Jim Brogan on the hand inside the box. Brogan didn't handle the ball intentionally but the referee awarded a penalty (must have felt sorry for Clydebank) and Jim Fallon made his usual immaculate job of scoring with the spot kick.

The ball was hardly centred before the full time whistle blew, signalling the end of Clydebank's challenge in this season's Cup competition. They went out to the team favourites to win the Cup- a team that at one time had six Internationals in their line-up. And most important of all, they took their drubbing like gentlemen in a very sporting contest.