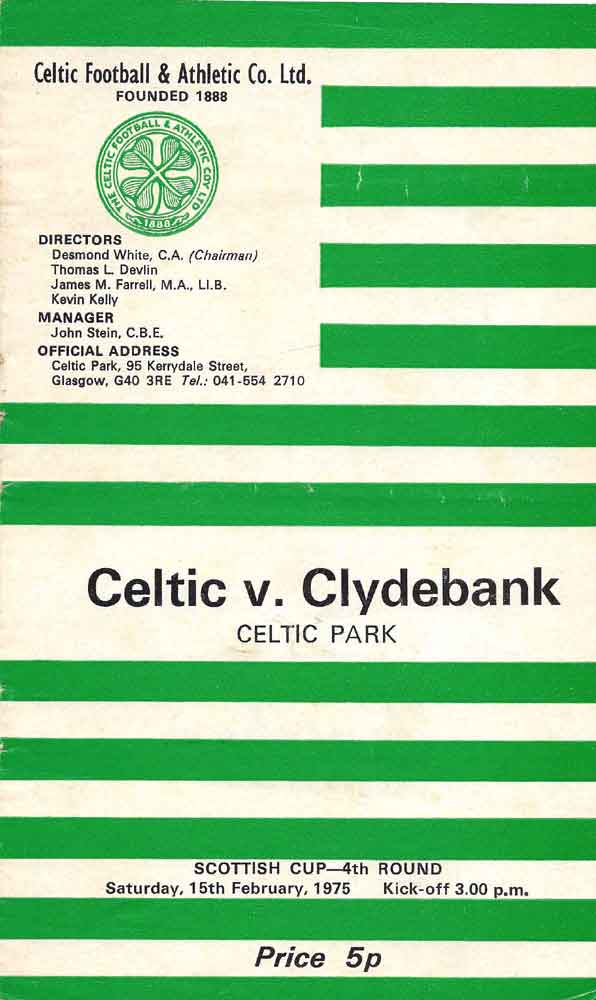 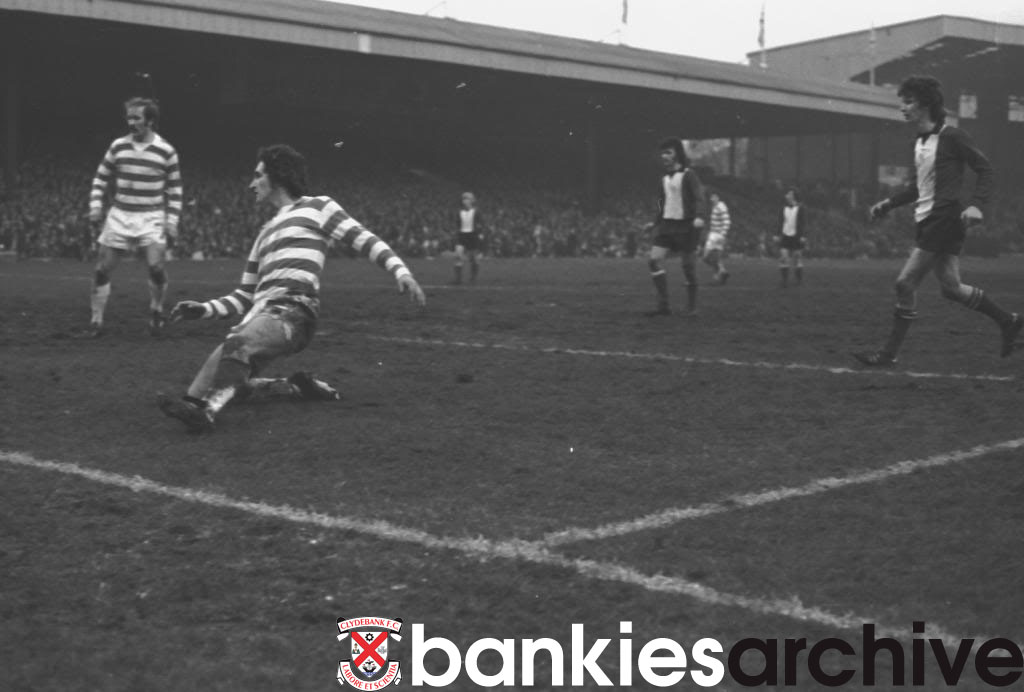 A 20,000-plus crowd greeted Bankies last Saturday as they took the field for their Cup tie against Celtic at Parkhead. Everyone but their own fans had written off the Bankies chances and an injury in training to midfield star Billy McColl forcing him to miss the match did not help their cause one little bit. Dougie Hay came into the vacant midfield berth.

Celtic, having dropped two vital League points in their past two matches, made five changes. Out went Hunter, Brogan, McNeill, Callaghan and Glavin with Barclay, McCluskey, McDonald, McNamara and Deans coming in.

The champs had obviously been doing their homework on Bankies for they paid them a supreme, if somewhat undesired, complement of switching international full back over to the left back position to cover flying winger Davie Cooper.

Undaunted by the prospects of facing the might of Celtic, Bankies kicked off and immediately took the game to the champions,

Playing their fluent 4-2-4 formation, they forced three corners in the first five minutes as they stretched the new-look Celtic defence to the full.

As Celtic took time to settle, Bankies were more than holding their own, and might have scored in the 15th minute. Kane crossed high to the far post and McCallan rose above McDonald and Barclay to flash in a header that was a fraction wide of the post.

This stunned Celtic into activity, but they were causing the Bankies defence little worry and their nearest efforts were two headers from Deans that failed to trouble Gallacher.

Midway through the first half, and the Bankies supporters were delighted that, not only had their side held their own, but were indeed the better side.

They were overjoyed in the 26th minute when Bankies deservedly took the lead. A long free kick by Fallon saw Larnach and McCallan in a jump for the ball with Barclay and Connolly. As the ball bounced free, McCallan was first to it and hooked the ball into the Celtic net.

Bankies' leading scorer was mobbed by his colleagues, and, for the next 12 minutes, looked as if they could pull off the shock of the season.

In the last seven minutes of the half, however, Bankies were brought back down to earth as Celtic turned on full power and scored three tremendous goals.

The, equaliser came in the 38th minute when a fine run and cross by Wilson was helped on to McNamara, who scored with a crisp shot.

Just as everyone was set for a draw at the interval, internationalist Kenny Dalglish, who had up until now been very subdued, struck with two devastating goals that clinched the tie. In the 43rd minute, he took a pass from Murray and blasted a 25-yard shot into the net. Then, with the last kick of the first half, sent a raging shot past Gallacher after an almighty scramble in the Bankies penalty area –

The second half was rather an anti-climax as Celtic had won the match with these three devastating goals. Although Bankies fought pluckily, they were beaten.

The final score was perhaps a little unfair on Bankies, who gave a spirited performance and certainly did not let themselves or their fans down.

Bankies can take heart from this game as they resume their promotion challenge against Queen's Park at Kilbowie tomorrow.

The next few weeks will be vital to Bankies as they play all of their nearest rivals, so two points tomorrow will set them up nicely for the challenge ahead. It should be a good match - and well worth seeing.