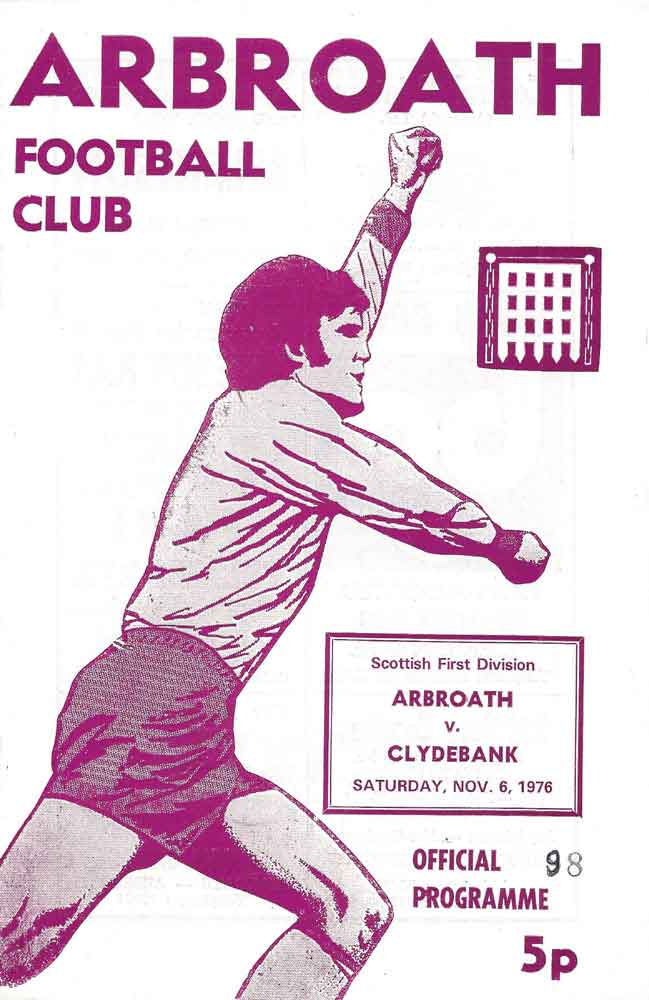 Two second half goals from Mike Larnach stretched Bankies' lead at the top of the league last Saturday. They never really had to stretch themselves, and keeper Jim Gallagher had his quietest afternoon for some time.

New signing Tom Callaghan was in midfield for Bankies, as expected, and they started strongly with Ronald and Larnach coming close. The home side tried to set up attacks, but with only Bone up front they did not get close enough to test Gallagher.

The game was being played at a cracking pace between two teams of contrasting styles. Arbroath's tactics were to play the ball from defence with high lobs, completely missing out their midfield, while Bankies as usual built up their attacks with neat man-to-man passing.

Davie Cooper burst into the game in the 20th minute with a run and shot that was blocked by Marshall, and Carson was happy to boot the ball for a corner as Joe McCallan waited to pounce.

With half an hour gone, the home side at last put some pressure on the Clydebank defence, forcing two corners, but they were easily dealt with, and Bankies came back with Callaghan shooting just wide.

The home side's best move of the first half came just five minutes from the interval when Bone raced dear on the right and crossed for Yule's head, but the winger sent the ball wide.

After the break, Arbroath with Gardner replacing Grant, began to move better, but Jim Gallacher was seldom under pressure and as usual dealt confidently with anything that came his way.

In Arbroath's best spell. Bone beaded over, then came a shock for the league leaders when Yule headed a cross from Bone past Gallacher, and Jim Fallon desperately cleared from the line

It was here that Bankies showed their determination, for rather than let this close shave trouble them, they raced to the other end, and after the best move of the game, Mike Larnach notched the all-important opener.

Joe McCallan started the move in midfield, with a square pass to Jim Lumsden. The ball sped from the skipper to Callaghan, on to Cooper, then Abel, and when the full-back crossed into the middle, Mike Larnach flicked the ball past Marshall and in off the post.

From then on, Bankies dominated play, and Arbroath had little to offer. With Tom Callaghan settling in and making every pass count, Bankies applied the pressure, and Joe McCallan was only a fraction away from connecting with a Callaghan cross a couple of yards out.

In the 75th minute Bankies tied the game up in a rather unorthodox manner, Jim Gallacher kicked a long clearance down field, and as the ball bounced deep in Arbroath's half, Mike Larnach and Cammy Murray raced after it.

Marshall left his line, but somehow one of the chasing players managed to get a head to the ball and it lobbed into the vacant net.

It was difficult to tell who got the final touch, but Mike Larnach joyfully received the congratulations.

Just after the goal Davie Cooper limped off to be replaced by Allan Munro, and as Bankies dominated, the sub shot from 12 yards to bring out a great save from Marshall.

To emphasise Bankies' superiority, Ronald crashed a shot off the bar, then Callaghan fired the ball just wide, and that was how play continued until the end, with Bankies never looking like losing their impressive run of four league matches without conceding a goal.

A satisfactory result against weak opposition, that establishes Bankies two points clear at the top of the table

Next, Airdrie are the visitors to Kilbowie, and Jim Gallacher will remember his only mistake of the season so far was at Broomfield, when he gave Airdrie a last gasp equaliser. Bankies will be out to make amends for that with a win in front of what should be a large crowd, with no Premier league fixtures in opposition.