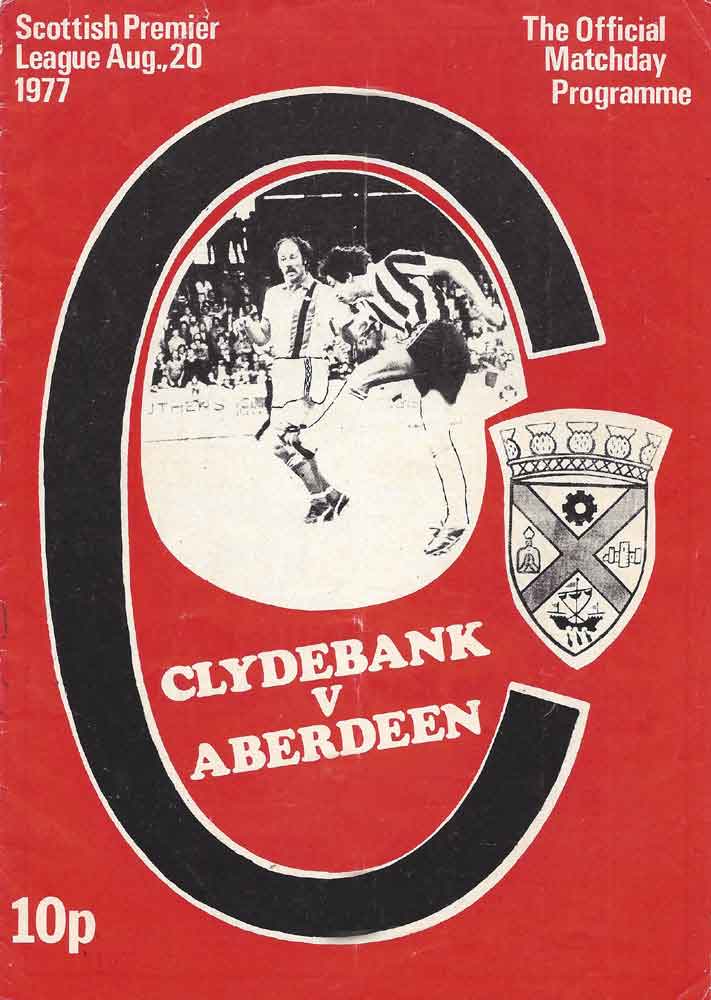 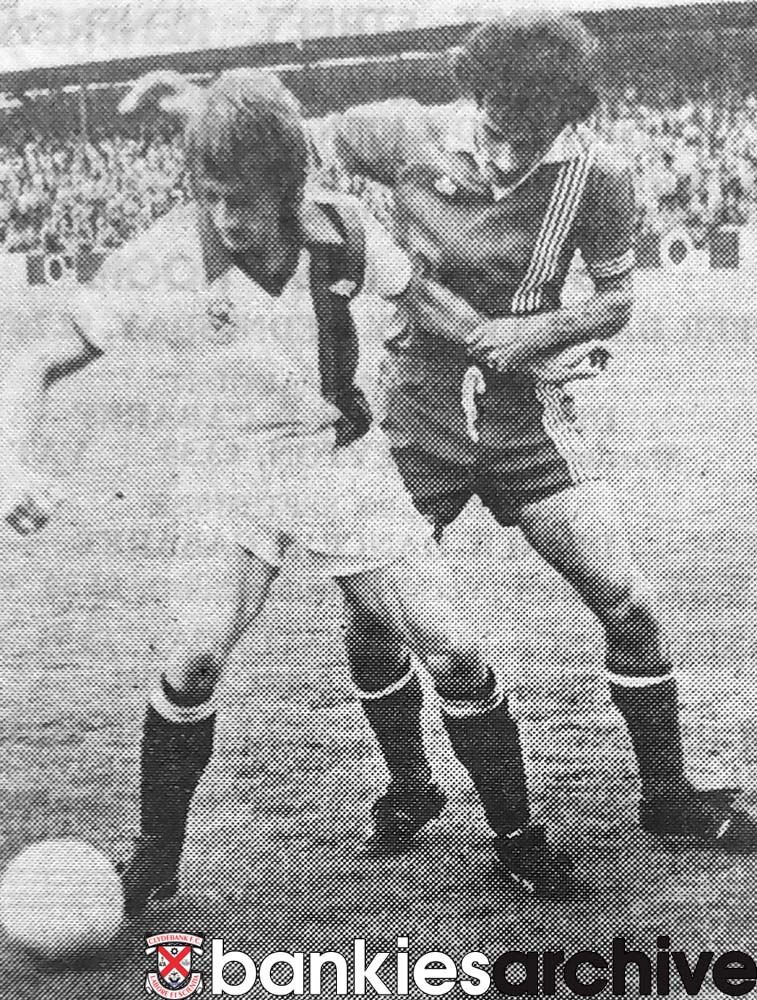 If ever there was a game of two halves it was at Kilbowie on Saturday. The first 45 minutes were dominated by Clydebank who played a brand of football that Real Madrid in 1960 would not have disowned. They led by a single goal at the break - it could easily have been three or four.

Most of the second period belonged to Aberdeen who delighted their support by scoring three times within seven minutes. Bankies show in the first half had to be seen to be believed. Mike Larnach was nothing short of an enigma as he tied the visiting defence in granny knots.

There was drama as early as the second minute when Bankies were denied a penalty. O'Brien sent through a great ball to McColl who was bundled off it by McLelland.

Clark was grovelling a minute later when O'Brien unleashed a super 20 yarder and from then until half-time it was the “Mike Larnach Supershow."

Bankies had cruel luck when after a quarter of an hour McCallan won the ball brilliantly in the air, head flicking it across goal. Larnach did a dummy run and McColl at the far post headed the ball down against the base of the post.

Larnach then came close with two shots from outside the box.

Then in the 25th minute he again homed in on goal - only to be pulled down savagely by Garner.

O'Brien took the free-kick, flicking it over the wall, of which Larnach was a part. Larnach peeled from it as though it was a rugby lineout, waited for the ball to drop and volleyed it into the net. It really was a peach of a move.

Ten minutes from the interval Dons had their solitary scoring chance of the first half when Jarvie headed narrowly over the bar,

McLelland should have been at least booked when he felled Larnach from behind it was the only way he could be stopped.

There was a foretaste of things to come just after the interval when Jim Gallacher brought off a majestic save from another Jarvie header.

Aberdeen looked a completely different team now, especially in midfield. McColl, Houston and Lumsden had ruled that territory in the first half but now they had their backs to the wall.

Larnach did have one incredible run up the left flank. He beat five men before sliding the ball to McCallan whose angled shot stung Clark's palms.

Then came the seven minutes of hell for Bankies fans. It all started when Garner equalised. He rose to head home a Harper free-kick after Houston had “fouled ” McMaster.

They went ahead soon after. Sullivan beat Fallon and Abel out on the right and crossed to the far post where Harper kneed the ball into the net.

Two minutes later they scored again. Gallacher failed to hold a cross and the ball dropped at Davidson's feet and he gleefully sunk to his knees and nodded the ball home.

Bankies brought on Gerry Ronald for Norrie Hall and this seemed to re-bolster them but it was really too late. The stuffing had been well and truly knocked out of them.

--------
Report 2
--------
It is obviously far too early yet to make any firm predictions about the prospects of Clydebank maintaining their Premier Division status this season following their meteoric rise through the two lower divisions in successive years.

On the evidence of my first visit to New Kilbowie Park on Saturday, however, I would go as far as saying that it would be a rash man who would state categorically that the Bankies will not last more than a season in the top grade.

The Dunbartonshire club seem to have a lot going for them - a bubbling enthusiasm and determination to succeed among their officials and supporters: a fairly sound economic position which, thanks to their social club, is not dependent for its stability on match attendances, and a compact ground which is in the throes of a comprehensive reconstruction and modernisation programme.

Most important of all, Clydebank have a team which looks capable of giving quite a few of their more fancied rivals a hard time of it, particularly at Kilbowie, before the season is over - as Aberdeen, who provided the Premier Division newcomers with their first big home test on Saturday will readily testify.

The Dons eventually won through 3-1 (their third victory by this margin in the space of eight days) but only after being subjected to a first-half roasting by an eager and skilful Bankies attack.

The Pittodrie side were probably relieved to reach the interval only one goal in arrears. Billy McColl struck the post with a header before Mike Larnach put Clydebank into a lead from a Gerry O'Brien free kick in the 27th minute.

One lesson which Clydebank could profitably take from Saturday's defeat is that they must learn to pace themselves more effectively. Understandably anxious to do well in their Premier Division debut before their own supporters in the 7000 crowd, the Kilbowie team played the first 45 minutes at breakneck pace, keeping the Aberdeen defence under so much pressure that the Pittodrie side had little opportunity to settle to a studied game.

The Dons possibly were further disconcerted by the restrictions of the small Kilbowie pitch, but the cumulative effect was that they provided very little in the way of constructive build-up in a dis-jointed first half, one of their few moves of note being a fine Dom Sullivan run through the middle which foundered on the edge of the home penalty box.

The second half, however, brought a remarkable transformation with Aberdeen taking over the dominant role and Clydebank, having lost some of their earlier sparkle forced to rely on the occasional breakaway to relieve the pressure on their own goal.

Even in the changed circumstances, however, there seemed a possibility that Bankies would hold on to their slender lead as their goal survived several crises. These included a point-blank header from Drew Jarvie being punched over the bar by Jim Gallacher and Joe Harper striking the woodwork with a swerving cut-back from the bye-line.

It was the 71st minute before the Dons made the equalising breakthrough when Willie Garner scored with a header from a well-flighted Harper free kick, and to underline the key function of the centre half's goal, the Dons added two more, in the next seven minutes.

Harper put the finishing touch to good work by Sullivan for goal No. 2 and, a minute later, Duncan Davidson, substituted for John McMaster immediately after the equaliser netted the clincher with a diving header after Ian Fleming had challenged Gallacher for a Jim Shirra cross.

The Clydebank game was one about which Billy McNeill later admitted that he had had some misgivings and the Dons manager was correspondingly pleased by the outcome. Taking both points from a tricky away game such as this, without the team producing their best form can be regarded as something of a bonus.

The housing of the Kilbowie Park Press box in an upper floor room of the social club only a few yards behind and above one of the goals promises to make it, when completed, approach the much more commodious custom-built Celtic Park Press box as the most comfortable of its kind in the country.

From a functional view point, its location may provide an unbalanced, perhaps even distorted, impression of the play with a foreshortened view of the action at the far end, but we were fortunate on Saturday in that respective teams dominated the game while playing towards the goal immediately underneath the Press box windows, thus affording an unusually close-up view of the main incidents, including all four goals.

It was particularly interesting to get from this vantage point what was almost a goalkeepers-eye view of the scoring moves, and, with the additional height, be able to pinpoint the skills of the individual attackers or the defensive errors which led to the goals.

In these circumstances, it is probably not surprising that it was attackers rather than defenders who caught my eye most of this game. Dave Houston, Gerry O'Brien and Mike Larnach were most impressive in the Clydebank side in the first half while Dom Sullivan and Joe Harper earned top, marks in the Dons' second-half recovery.

Within a minute of appearing as a substitute, Duncan Davidson was brought down in full flight by a tackle which earned Billy McColl a booking, but this did not prevent Davidson once more proving his value in the role of second-half replacement.

I was delighted with our first-half performance on Saturday at Kilbowie. We ran rings round Aberdeen and should have been more than a goal up at the break.

The second half was very disappointing - it's difficult to put a finger on what went wrong, but when Aberdeen started to use the long balls much more we panicked a bit. This led to mistakes being made and they were punished.

We must play much harder-our skills match anybody's but we must be more physical - we can't afford to be too nice.

All the other sides make extensive use of the “professional foul" — we must learn to do the same.

Some folk said on Saturday that we lost because we weren't as fit as Aberdeen-that's rubbish, we're every bit as fit as any other Premier League side — we must just learn to put things together for the whole 90 minutes.