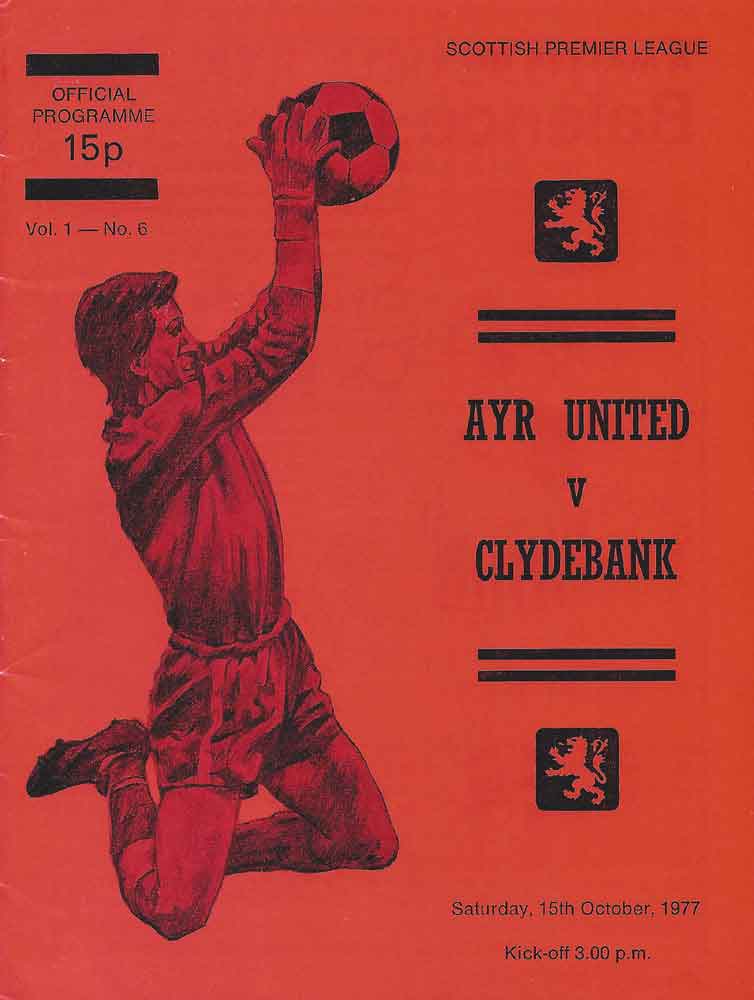 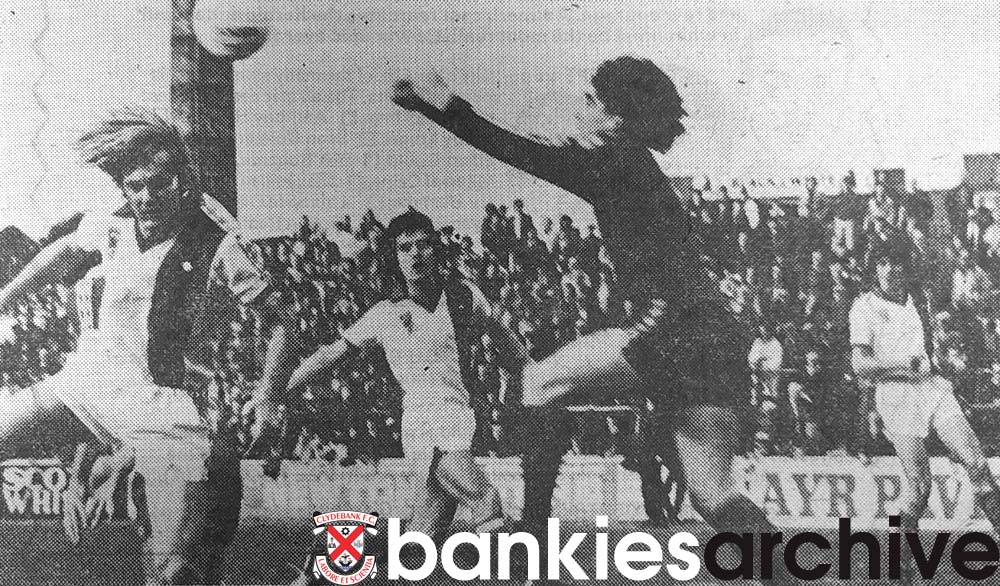 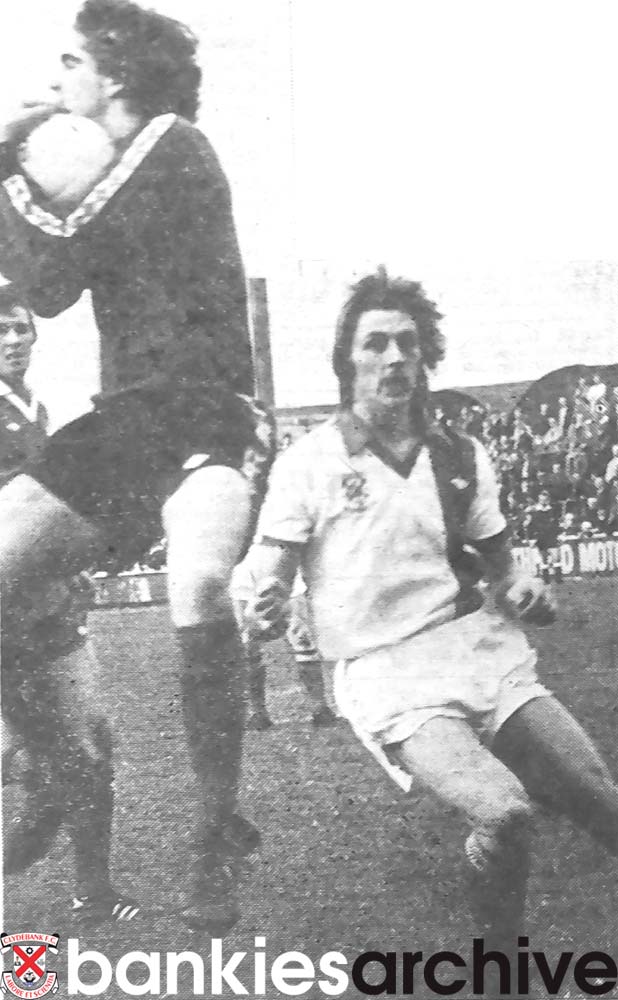 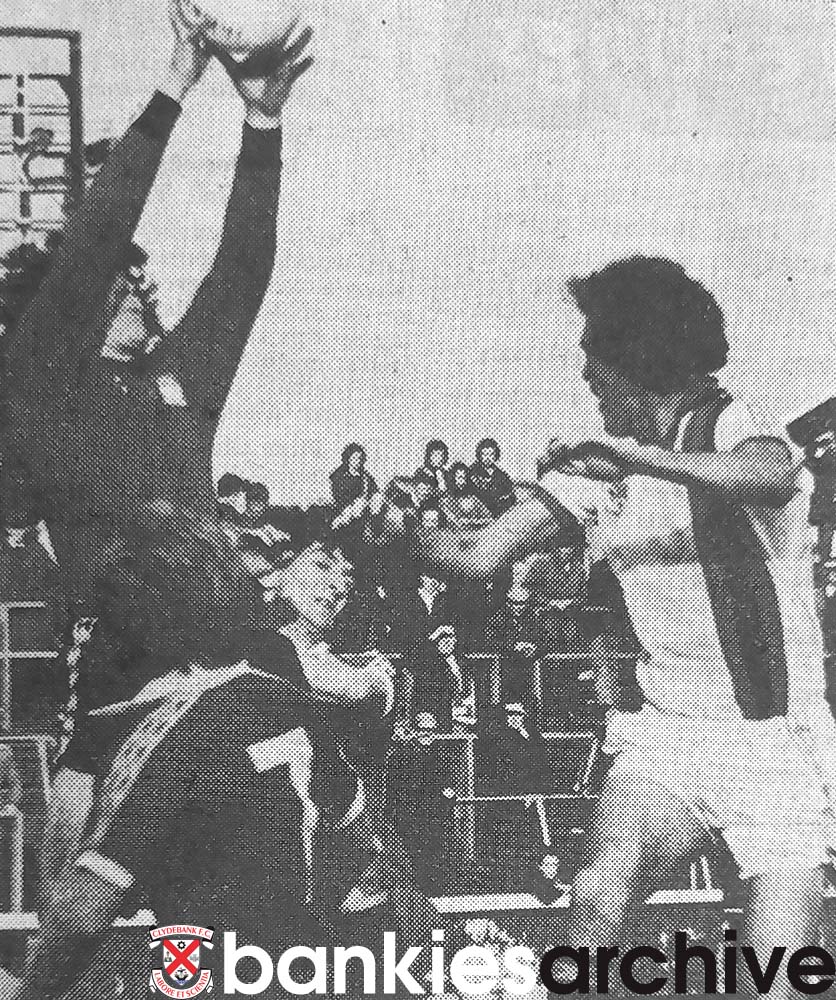 In a game of fits and starts a goal in each half from the homesters dumped an inconsistent Bankies team. It was a match of extremes - there were patches of brilliance from both sides and there were also periods of indifference. Ayr tool their chances - Clydebank did not.

Bill Munro fielded an unchanged side from the Motherwell match and they were under pressure in the opening minutes. Gallacher had to look smart to clutch a header from Christie after some useful wing-play from Crammond.

Bankies had a golden chance in The ninth minute. A superb through ball from Colgan found Joe McCallan who, under pressure, blasted the ball into the side netting,

Billy McColl then had a good effort from 20 yards which was well smothered by Sproat.

Ayr had started the stronger side but Bankies seemed to be controlling things.

Ayr broke and Crammond was just wide with an acrobatic effort alter McColl had won the ball in the box.

Mike Larnach should have done better than to head over an open goal from a Colgan cross.

Again McCallan was left in a scoring position - this time from a prodigious headed clearance from McCormick - but he took too long to pick his spot and was robbed.

Ayr opened their account through McColl. A huge blooter from Fillipi wasn't cleared by McCormick and the Ayr man ran the ball right round the box before shooting past Gallacher.

A minute later Bankies created a three-two overlap but Larnach who didn't see the unmarked McColl in the middle elected to go himself and was brought down. The free-kick was wasted.

Ayr began after the interval like greyhounds. Fallon was forced to clear over his bar when Gallacher was hurt in a collision. Bankies came back and mainly through the midfield work of Dougie Hay created several good chances,

Tom Callaghan came on for Gerry Colgan and this seemed to give Bankies some extra strength down the right flank.

It was Danny Masterton that sealed Bankies' fate. He ran on to a through ball, played around with it, and unleashed a deadly shot that squeezed in between Gallacher and his near post.

Bankies were deflated and apart from a good McColl shot their offering was spent.

Bill Munro was extremely disappointed with his side's showing at Ayr on Saturday, especially after the way they outplayed Motherwell the previous week at Kilbowie.

He said after the game: "Ayr were there for the taking it was a very winnable game. Our main trouble is that we failed to take our chances - especially those we created in the first quarter of an hour. The longer the front men go without scoring the more pressure gets put on the back four they make mistakes and goals come from the opposition.

"We have had a few talk-ins - the players and I - to discuss what has gone wrong. Unfortunately it has got to the point where the defenders are blaming the front-men for not taking their goal chances and the forwards are blaming the back-men for losing goals.

"It's a depressing fact that of our main striking force Joe McCallan has not found the net since the East Fife game on August 17 and Michael Larnach has lacked a goal since August 20 when he scored that beauty against Aberdeen at Kilbowie.

"What we must do now is to stop blaming each other and find a cure.

"We could have won quite a few games this season if we had taken our chances early on — the only game in which we were truly outplayed was the Hibs one at Easter Road."

Mr. Munro had some harsh words to say to the one or two so-called Bankies supporters who are conspicuous by their behaviour.

“They stand on the terracing week after week and as soon as certain players set foot on the park they are barracked and this goes on for the whole game. The support has been great over the past two years, but we have managed to keep winning games with or without the fans. This season it has been different, we haven't been winning, and it is NOW that we need our real fans more than ever.

"Encouragement is what the boys want — not continual slaggings, which do not help their confidence one little bit.

"Back to last Saturday—although I was unhappy with the team as a unit the two centre-backs didn't do their reputation any harm — that's John McCormick and Jim Fallon."

Ally MacLeod, manager of Scotland, attended Somerset Park presumably on the grounds that it had the nearest game to where he lives. It was an unkind suggestion that after a hectic week he wanted to have an afternoon off from football.

In the event he (and 3700 others) saw a bustling little game in the basement of the league. The fare was plain. For Ayr it was also nourishing. The past two Saturdays have brought them four points. Confidence should benefit. With Celtic going below them some of the weight of the league that has been pressing on their backs has been lightened. Ayr this week can have not unreasonable hopes of further adding to their total against Partick Thistle, again at Somerset.

United's big forwards, McCall and Masterton, scored the goals well against Clydebank, who looked perilously short of height at the back. McCall dragged the ball across the box with great coolness to line up the first.

In the second half Clydebank's goalkeeper left an inviting gap between himself and the near post. The hole wasn't as big as a church door. But it was enough. It served well for Masterton to find a way home. After that, the heart went out of Clydebank.

In Ayr's goal Sproat was again the expert entertainer. His reflexes are sharpened to a fine edge, partly thanks to the wildly eccentric ball which his mates turn back to him. Filippi was whole-hearted as ever. Fallon and McColl slogged away gamely for Clydebank.

There was a simple lack of sophistication, even an innocence, about the game that was reflected in the match programme. It became some kind of collector's piece in that both teams played as they had been printed.

It is getting so that the better programmes have almost 90 minutes of good reading in them, which does provide some occupation for the eye when there is not much else to behold.

The Somerset magazine, one of the best, had a potted biography of Hugh Sproat. He gave his pet likes as "girls and winning" (also lager) and his pet dislikes he said were "Englishmen and losing." Truly, he is a goalie to be cherished.

It may be and sooner than anybody thinks - that supporters will turn up at a park for programme, but not bother to go in.