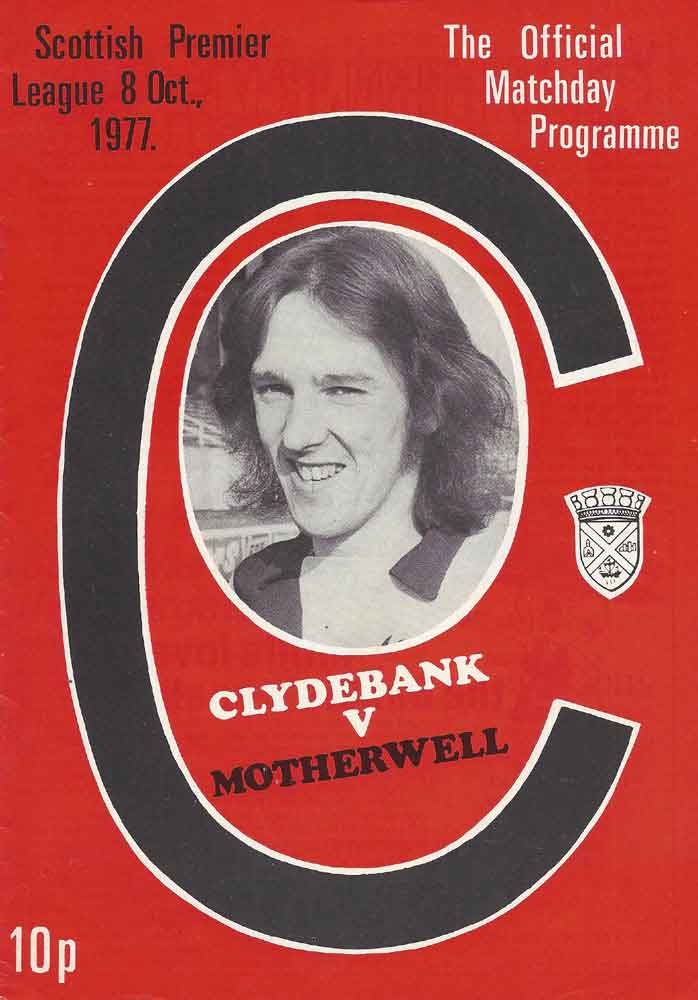 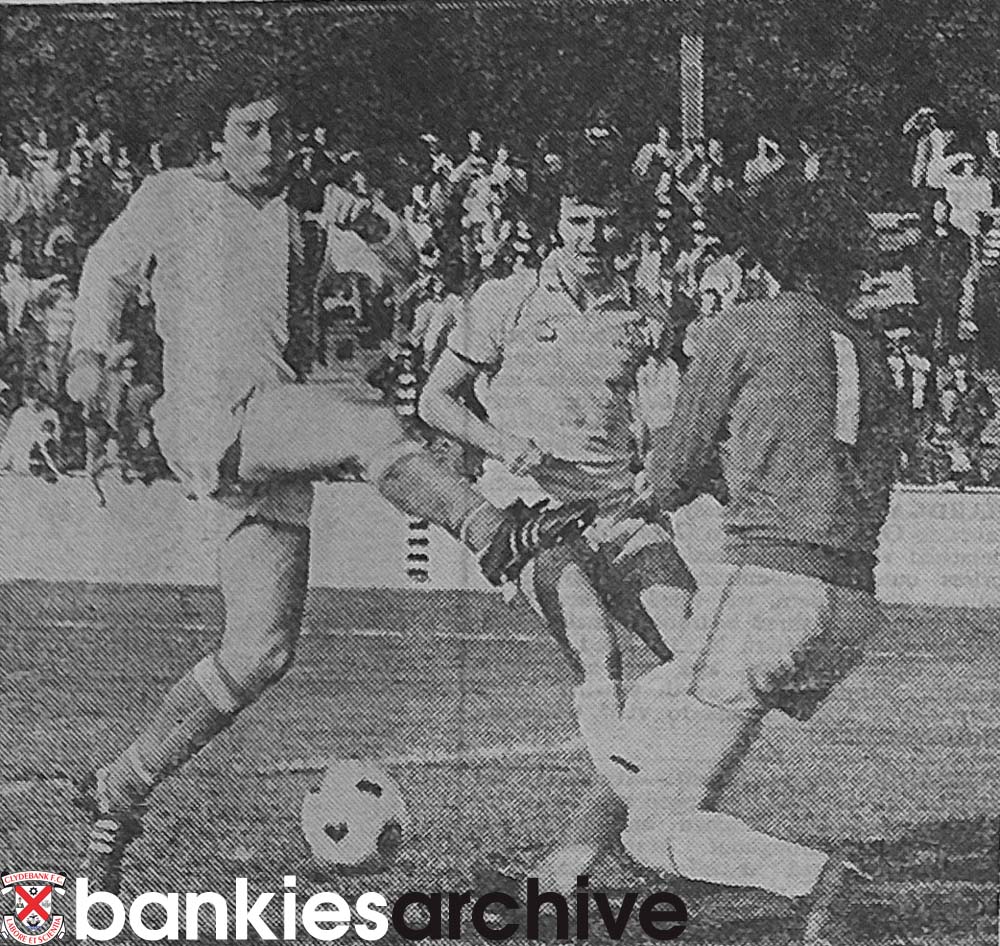 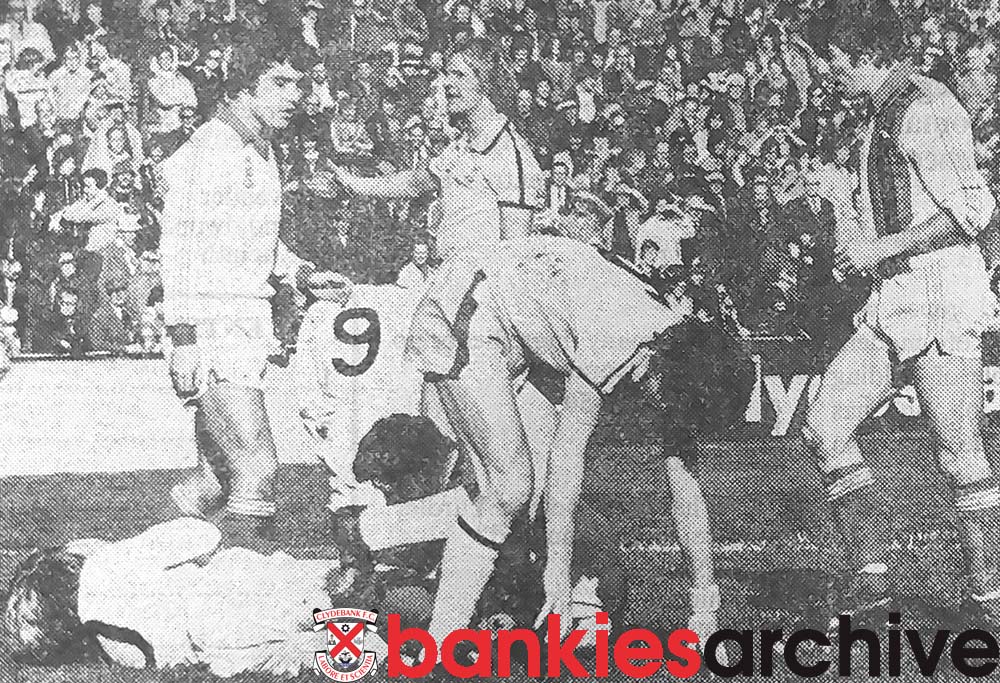 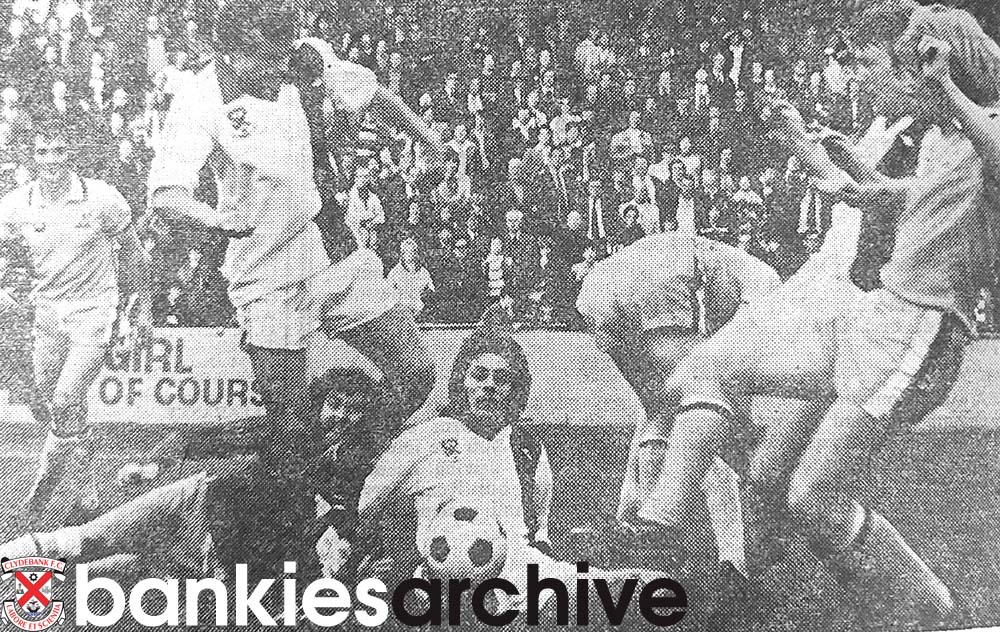 A goal in each half by possibly the two most unlikely scorers in the side gave Bankies their first victory of the season. It was a totally deserved win too. Bankies produced a great all round team performance that was too much for a ragged Motherwell outfit.

Bill Munro made two changes from Wednesday's debacle at Dunfermline — out went Gerry Ronald with a groin injury and McNaughton who was on the bench with Tom Callaghan, and in came Jim Lumsden and Joe McCallan.

Bankies intentions were clear from the start. They went straight into the attack and should have opened their account in the very first minute. McCallan gave the ball to Colgan who crossed into the box. It was diverted by Larnach to the unmarked McColl who shot wide from eight yards.

McCallan then came close with a header but Rennie covered well.

Bankies took the lead in the 11th minute. McColl took a long throw out on the right. McCallan head-flicked it across goal to Dougie Hay who prodded the ball past Rennie.

Motherwell had their best effort of the half when Purdie shot narrowly over the bar from the corner of the box.

Clydebank had the game well under control though, with Colgan and the much sharper looking McCallan posing problems for the Fir Park Men.

Larnach was only centimetres away from increasing the lead when he just missed out on a Colgan cross.

Although play became scrappy towards the break Bankies continued to create chances and Colgan and McCormick each had near things.

Motherwell replaced full-back Watson with winger Marinello who proved to be their best player along with Joe Wark at the back.

Bankies almost got the benefit of an own goal when Colgan beat two men before crossing low and hard across goal - Wark turned the ball just past the post.

Then came a particularly nasty series of incidents. Purdie was booked for tripping Norrie Hall and Joe McCallan was led from the field with blood streaming from a face wound. He went up for the ball with Willie McVie. McCallan fell – and McVie sat on his face – McVie promptly got up and stood on Joe’s face. The referee didn’t see it but a red-faced linesman obviously did but he was upfield like a shot.

Bankies continued to press and Lumsden had a couple of good shots.

With 20 minutes to go they went two up. Lumsden’s free kick was dropped by Rennie and in the ensuing scramble John McCormick slid the ball into the net.

Time after time Larnach was bundled off the ball by McVie and to cap it all he back heeled Mike in the shin and incredibly was only booked by the referee.

Motherwell attacked relentlessly and with nine minutes to go scored an undeserved goal. Marinello was the scorer with a fine 20 yard drive.

In a nail-biting final few minutes Norrie Hall pulled off the tackle of a lifetime to halt Marinello who seemed clean through.

Bill Munro was naturally delighted with his side's Success on Saturday at Kilbowie. He said on Tuesday: "You've no idea how much a victory means to us. For the past couple of weeks or so it’s been very difficult to motivate the players at training sessions - their heads were down and they had to be pushed into everything This week's training has been great - the boys are enjoyng it and Saturday just can't come quickly enough." .

Minor injuries and knocks seem to clear up much quicker as well - they are virtually forgotten about."

Joe McCallan, who received a bad face wound on Saturday, had his stitches out yesterday and should be ok.

Gerry Colgan also needed stitches in an ankle-knock and he should be fit, although on Tuesday his ankle was still swollen.

Mr Munro refused to pick out any individuals from Saturday's team. - Everyone played their part - they were all fighting for each other. It was a bit like last year - only then we had 10 workers and ore individual in David Cooper - now we've got 11 workers," he said.

I thought that on Saturday the two full-backs Gregor Abel and Norrie Hall played with much more assurance than of late.

One tackle by Hall in the last minute on Marinello saved a certain goal.

After the game Bill Munro said of Abel: “He may not be all that brilliant an attacking full-back but he gets in tackles that nobody else could."

The lights are coming on again at Kilbowie Park. That was the factual as well as the figurative message as Clydebank notched their first Premier League victory.

From the fighting qualities they displayed it is much too early to write off the Bankies - and helping to brighten their path towards survival is a new set of floodlighting, installed at a cost approaching £20,000, which will be switched on next week in the club's league cup second leg against Dunfermline.

This morning work begins on the installation of the further 600 seats which will bring the seating capacity at Kilbowie up to 1000 before that match.

With all these visible signs of progress, plus the breaking of his team's duck, Bil Munro was in jubilant mood on Saturday.

Dougie Hay got Clydebank off the mark from a well-rehearsed set piece manoeuvre. The 'lesson of Hibernian's Schaedler's long throw which cost Bankies a goal at Easter Road and earned the team a managerial tongue lashing has been well learned.

Norrie Hall played Schaedler's role to perfection. Joe McCallan head-flicked on, and Hay was there to complete the job.

John McCormick got the second after Stuart Rennie obligingly dropped a free kick at his feet. But just when the outcome seemed a formality, Motherwell attempted a late fightback after Marinello, a substitute, scored in 80 minutes.

Marinello may be the only Fir Parker to escape the wrath of the manager, Willie McLean - and it is indeed fortunate that a stout fence bars access to the railway at the back of Kilbowie. "I feel like stepping in front of a train," growled McLean. "I'm absolutely disgusted. That's the worst display I've ever seen from a Motherwell team and I've told the players so in no uncertain terms. There will be changes," McLean vowed grimly.

Willie McVie, his centre half, clashed with Joe McCallan, who was taken off with a cheek gash which required five stitches, and Gerry Colgan needed two stitches in an ankle wound. McVie's clash with McCallan was possibly accidental, but there was no doubt about his back heeler on Mike Larnach.

A booking was the penalty when the red card would not have been inappropriate. Ian Purdie also was booked, as was McCormick of Clydebank.