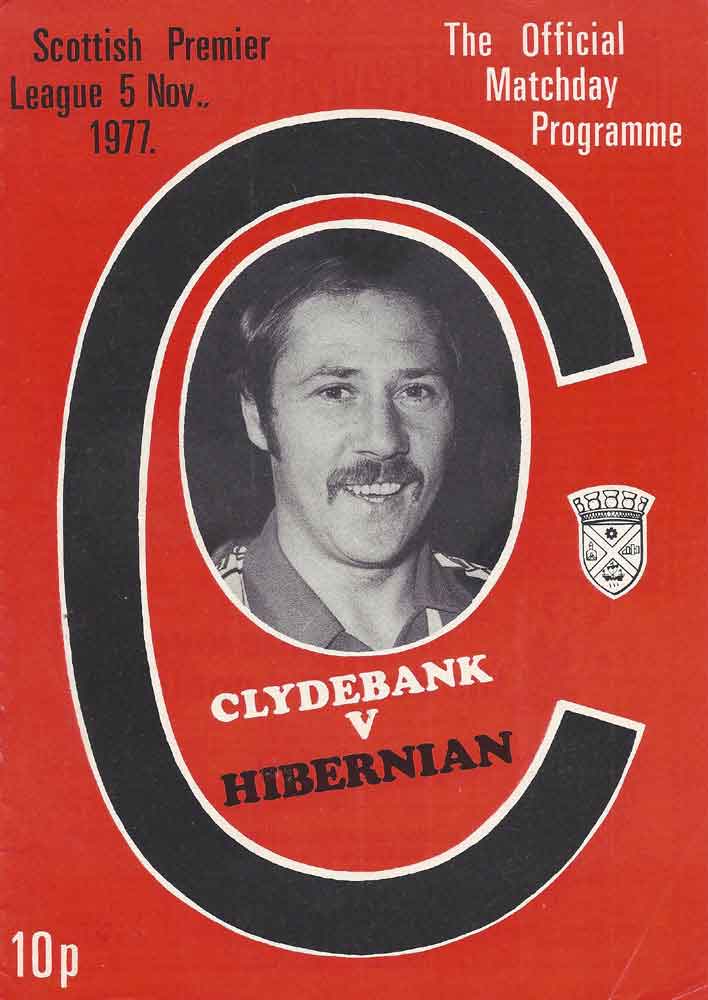 A superbly worked goal by Billy McColl gave Bankies a thoroughly deserved victory over a lacklustre Hibs team at Kilbowie on Saturday.

Bill Munro fielded an unchanged side while the men from the capital had back the talented Alex Edwards after a long lay-off. But even a player of Edwards' calibre couldn't stop Bankies who were superior in every aspect of play.

Gallacher was as safe as ever in goal, McCormick and Hall shone at the back, Colgan did the donkey work while Larnach, McCallan and McNaughton would have fared well in the Greyhound Derby. Oh, and Jim Fallon ... well he was just ... Jim Fallon!

Bankies were on top from the start. In the first half they created nine clear-cut chances and Hibs could only muster two worthwhile assaults on Gallacher.

Minutes later McNaughton came within a coat of paint of making it two. He shrugged off Brazil and lobbed the ball over McDonald only to see it come of the inside of the base of the post and into a very relieved 'keeper's arms.

McLeod was the only Hibee who looked dangerous and he brought out the best in Gallacher with a scorching 20 yarder.

Hibs had their best spell just after the break and they did manage to put the ball in the net when Higgins headed home from eight yards - but Henderson was standing offside on the goal-line.

After that it was all Bankies and if luck had been on their side they would have bagged a barrowload.

McDonald brought off a wonder save from a McCallan back header, a Larnach header was kicked-off the line, and a great McNaughton header beat McDonald and struck the post. McColl then made McDonald grovel with a low free-kick.

The half-dozen or so photographers from the "big" papers persisted in crouching behind Gallacher's goal - they have done so all season. Maybe things will change now-never mind, our cameraman, Sandy Lynch, has certainly been snapping up the best of the action over the past three weeks - he's always on his own at the other end!

Bill Munro was a happy man after his team's fine performance against Hibs. He said: "I was delighted not only with the scoreline but with the way the boys went about getting the win. I couldn't pick out any specific man they all did their jobs in a very pleasing manner.

"The teamwork was first class, like I said two or three weeks ago, we've got 11 workers, not like last year when we had 10 workers and one individual (Cooper).

"Colgan and McNaughton played really well on the flanks - both in attacking, when necessary, defensive roles.

"Norrie Hall had his best game of the season he never gave Arthur Duncan a look at the ball."

The manager was also delighted with the mobility of the striking duo, Larnach and McCallan, and had special praise for the inevitable Jim Fallon.

He added: "It was nice to see Billy McColl getting back on the scoresheet-maybe this will lift his confidence a bit and he will start playing with the tenacity he did last term."

I put it to Mr. Munro that it was a bad thing that Ayr United seem to keep on winning and keep their noses ahead of Clydebank in the league race.

“On the contrary," he said: "We're delighted if they keep winning because by doing this they are pulling more sides down into the danger area at the foot of the table.
"The more teams there are in this zone the better the chances are of Clydebank overtaking them."

The unthinkable is in danger of befalling Edinburgh. On the evidence of current form, Scotland's capital, dare we say It, could be without a Premier League side next season.

Hearts' hopes of a speedy return to the top flight took a body blow on Saturday when they were beaten at home by Kilmarnock. Adding injury to insult is the fact their veteran defender, Jim Brown, suffered a double leg fracture and could be out for the remainder of the season.

Hibernian, at Kilbowie, did little to support any reason why they should not be considered candidates for next season's first division and that against a team which, until recently, was being touted as a certain relegation candidate.

True, Clydebank are still anchored at the foot of the league table, yet they were ahead in every department on Saturday. Weighed man for man, not a single Hib measured up to his opposite number.

The most glaring inequality was up front, where Larnach, and McCallan were particularly tenacious and Incisive for Bankies, and Sandy McNaughton covered every Inch of Kilbowie Park. The former Queen's Park player set up the only goal of the match heading down into the path of McColl, who shot home, climaxing a beautiful move, albeit from a suspiciously offside position.

There might have been even more between the sides if McNaughton had had a little more luck. Once In each half he struck the woodwork. In the opening 45 minutes he floated a delicate chip over McDonald's head, but hit the upright, and in the second half he bulleted a header against a post with the Hibs goalkeeper beaten.

Hibs did have the ball in the hot with a good Higgins header, but Henderson, standing on the goal-line, was clearly offside.

That, however, was merely a token Hibs gesture in the second half. Even John Brownlie, the Hibs full back, sidelined with a leg Injury, who watched the match from the sanctuary of the press quarters, was prompted to remark that the onslaught on his colleagues' goal was like Custer's Last Stand. He could be right. Hibs certainly don't look like survivors.

Bill Munro, the Clydebank manager, feels that only now is his team adjusting the pattern of their play to the departure of Davie Cooper. "The transition has been harder than we expected," he said. "But the players I've brought in are now doing a job for us, and I'm not in such hurry to plunge into the transfer market."

Hibs could do with a move or two in that direction themselves. There is a dreadfully unimaginative look about them. Indeed, they are as poor a Hibs side as I have seen.