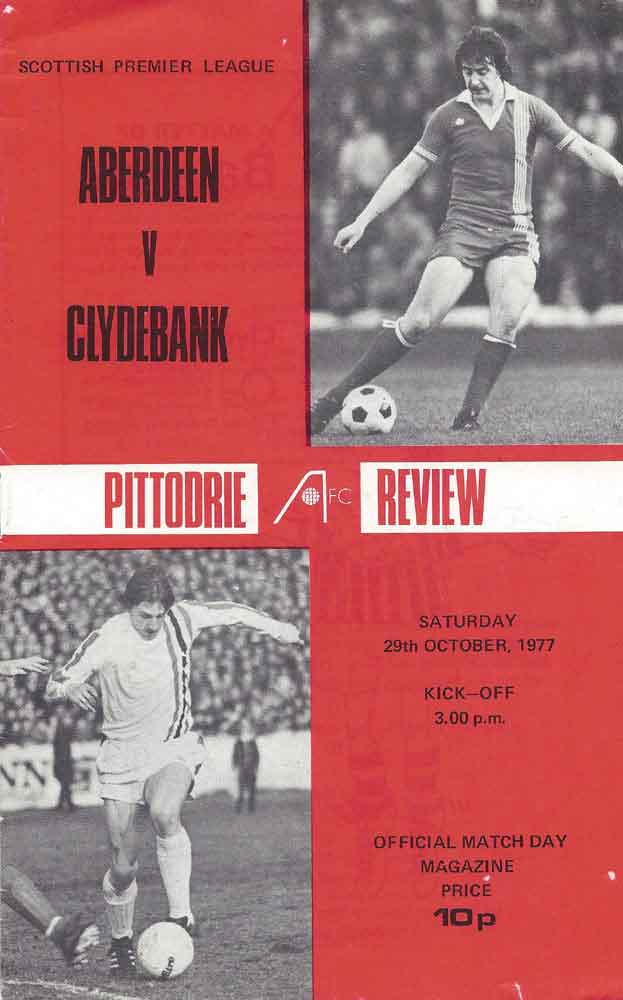 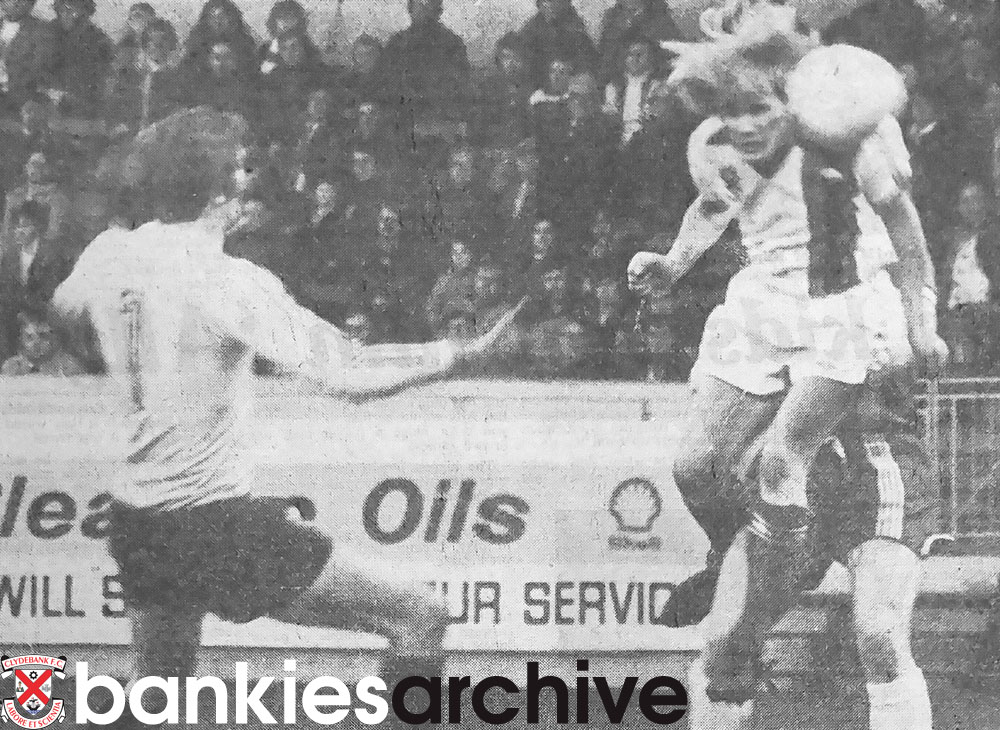 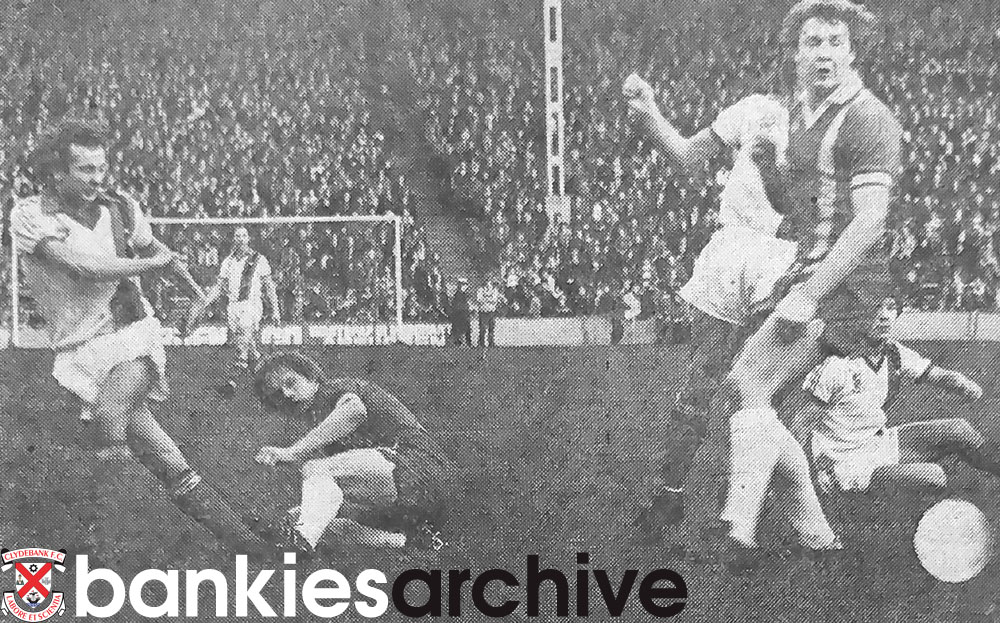 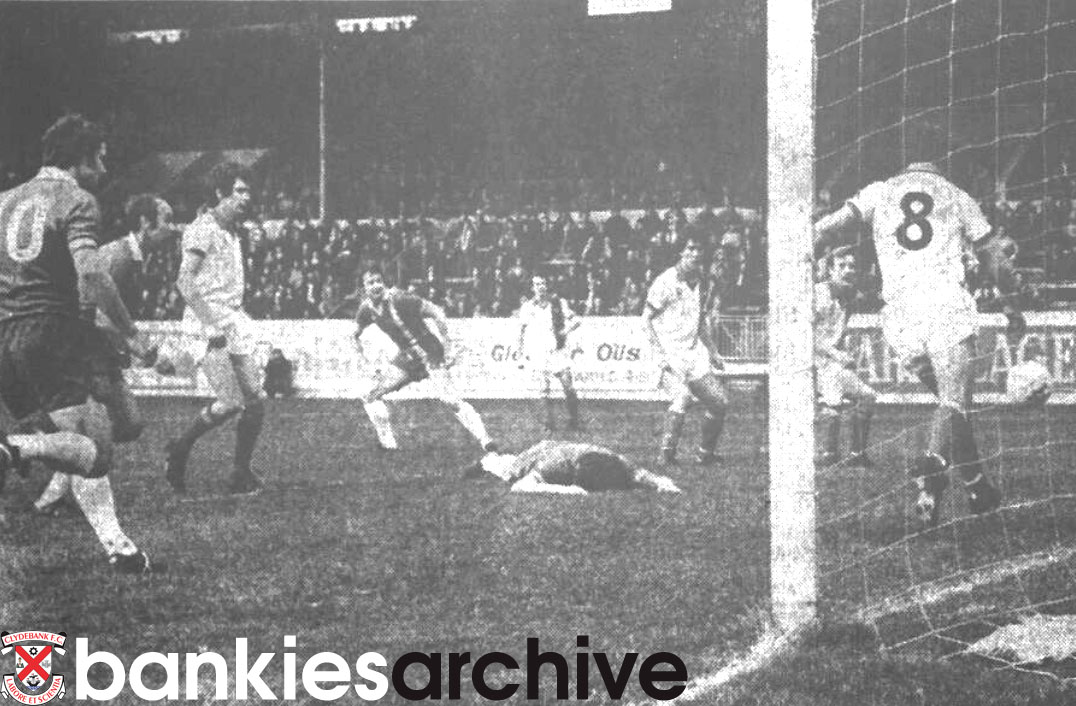 A headed goal by Joe McCallan midway through the second-half gave Bankies a very fortunate point at Pittodrie on Saturday.

Bill Munro made wholesale changes from the side that faced Dunfermline midweek. Out went King, Gervaise and O'Brien, to be replaced by Gallacher, Abel and Colgan. Jim Lumsden took over from Houston on the bench.

The first half belonged to Aberdeen. They created about a dozen valid scoring chances but a mixture of fine 'keeping by Gallacher and misdirected shots kept the scoresheet blank.

Bankies looked quite useful on the break, though, and more than once Larnach and McCallan posed problems for Garner and McClelland.

Harper and Jarvie always promised much but it was not their day. Gallacher completely justified his recall with a string of fine saves, one of which was the best I've seen this season. McMaster crossed for Jarvie to head and somehow Jim flew up to turn the ball over the top.

Aberdeen's closest thing came when Harper bent round a shot from the edge of the box - the ball hit the base of the post. Harper eventually gave Aberdeen the lead nine minutes after the interval. McMaster took the ball to the bye-line before squaring it in front of Gallacher to Harper who poked the ball into the net.

Jim Lumsden came on for a tired looking McNaughton and Bankies began to click.

In the 62nd minute they were level - thanks to a dreadful lack of judgment from Bobby Clark. Bankies won a free-kick just inside the Dons halt. Lumsden pumped the ball high into the area - Clark came, saw, but could not conquer and Joe McCallan gleefully nodded the ball into the net from ten yards. It was Joe's first goal since August 17th.

Bankies were re-vitalised and they went from strength to strength. Fallon and particularly McCormick were superb at the back and although Aberdeen could boast the odd breakaway Bankies were the more urgent side from then on in.

With three minutes left Clark got into trouble again. Colgan fired in a cross-cum-shot from the corner of the box and Clark looked in difficulties as he palmed the ball round the post.

Jim Gallacher then saved well from a Harper ground shot and in the closing seconds Billy McColl was cautioned for fouling.

It was a lucky point for Clydebank but Aberdeen were punished for not taking their first-half chances. Gallacher, Fallon, McCormick and Larnach were the pick of the Bankies while Harper, Jarvie and Smith earned their Pittodrie keep.

It was about time Bankies got some luck - they hadn't had any in the previous four weeks.

Aberdeen manager Billy McNeill was unusually critical of his players-not without justification-following their loss of a precious Premier Division point co foot-of-the-table Clydebank at Pittodrie on Saturday.

Carelessness and complacency were the twin charges he levelled at the Pittodrie, team after they had allowed the Bankies to escape with a 1-1 draw which even their most fanatical supporter would have found difficult to describe as deserved - and manager McNeill also sounded a warning that attitudes would have to change.

"I was reasonably satisfied with a goal-less first half, even though the finishing was not what it might have been, because we knew that it might not be easy to break down the Clydebank defence, and at least we were creating the chances," he said, "but having made a breakthrough which they had worked for patiently and taken the lead soon after the interval too many of my players seemed content to leave it at that instead of pressing home the advantage.

The result was that it needed only a single goal resulting from a simple defensive mistake for Clydebank to snatch a point. Aberdeen did the difficult things well and the easy things badly and I regard that as carelessness.

"Perhaps it was an understandable reaction to their midweek performance against Rangers, but it's simply not good enough, particularly for the public, who have been giving us such magnificent support and deserve something better in return".

Manager McNeill's slating of his players – the first glimpse he has given as Aberdeen manager of the iron hand beneath the velvet glove - came immediately after Saturday's game, but the Dons' display was still rankling with him yesterday and this in itself is a measure of how much the performance offended the Aberdeen manager's standards of professionalism.

To someone like Mr McNeill nurtured in a Celtic team which enjoyed unparalleled success principally because the players rarely under-estimated the opposition and never relaxed their efforts in a game until the final whistle blew, the very idea of conceding league points needlessly is anathema. His task now is to inculcate a similar attitude in the Aberdeen players under his command.

Mr McNeill's forthright comments on his team's shortcomings leaves very little to be added by me in the way of constructive criticism.
Anyone not among the crowd of close on 11.000 who witnessed the game would find it difficult to comprehend how a 1-1 scoreline could come from as territorially one-sided an encounter as this was,

Clydebank, with only a couple of players - Jim Fallon and Mike Larnach - of real Premier Division class, again proved themselves stuffy opposition, but overall they looked no better a side than their league record suggests, and as an attacking force their threat to the Aberdeen goal was practically negligible.

It was only a nightmarish error of judgment by Bobby Clank which gifted the Kilbowie said a goal - the Aberdeen keeper completely missed a lofted long-range free kick from substitute Jim Lumsden in the 64th minute and Joe McCallan had an unobstructed header into the net-yet it was enough to neutralise the lead which Joe Harper had given the Dons 12 minutes earlier after a neat build-up involving Chic McLelland, Drew Jarvie and John McMaster.

Clark's uncharacteristic lapse was, of course, the crux of the Dons disappointment, but the point is that Aberdeen were so much in command in this game that they should not have been in a situation in which a single mistake-even by a goalkeeper--could prove so disastrous.

Certainly Clydebank met Aberdeen's attacks with defence in depth and the visitors' goal seemed to bear a charmed life at times with keeper Jim Gallacher throwing in a couple of fine reflex saves for good measure, but the Dons also contributed to their own failure to score by feeding their crosses right to the keeper.