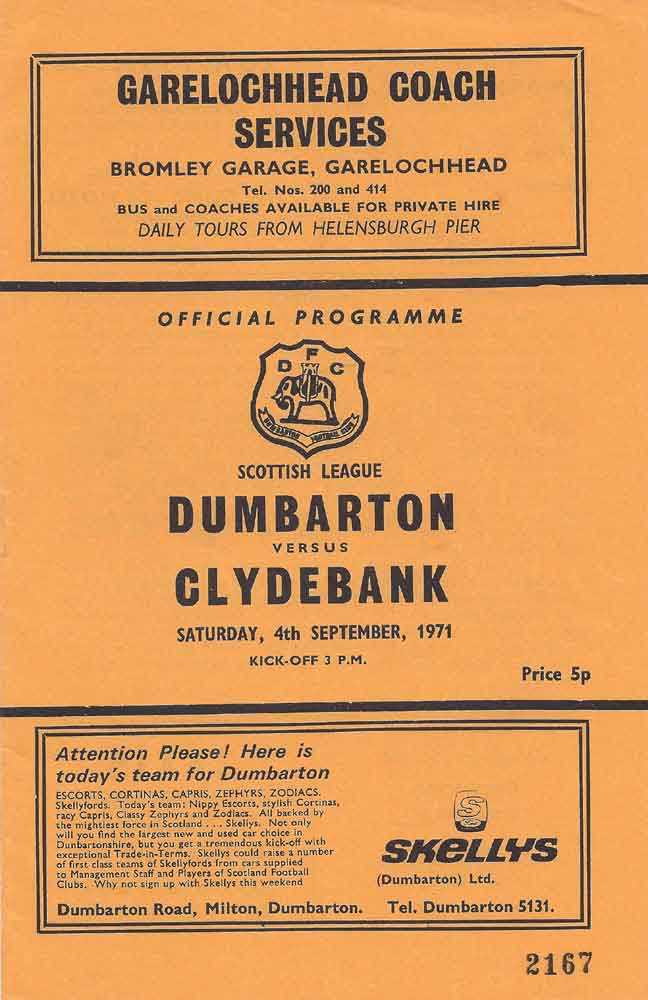 The new "pin up” boy of the Bankies fans, centre-forward Peter Kane, couldn't have picked a better game to make his come-back after injury.

For with the Bankies under a lot of heavy pressure from the Sons and their defence looking very shaky, Kane connected with a Jimmy Caskie corner five minutes from the end of the match to send the ball into the net with his head, for the match winner.

This goal, right out of the blue, gave Bankies both points but I'm sure even the most ardent Clydebank fan will agree that the Sons were worthy at least one point.

The fans on Saturday certainly can't complain. For entertainment value; this derby match must rank among the best. The only one that surpasses it in my mind was a few years back at Boghead when the Bankies went down 5-4 after leading 4 - 3 at half time.

Right from the kick-off both teams served up good attacking football and there were a few near things at each end. In an early raid, the Bankies had a penalty claim turned down after a defender had supposedly handled the ball in the box.

A few minutes later, Dumbarton centre-half Jack Bolton limped off the park after an accidental clash with Graham McFarlane and had to be given attention on the side-lines. When he resumed play a few minutes later, his left leg was heavily strapped up and he limped about for a while before getting into the swing of the game again.

However, I bet Bolton had wished he hadn't come back on to the park so quickly. For when Dennis Ruddy floated a free-kick high into the box it wasn't a Clydebank head that sent the ball into the back of the net - it was Bolton's. The tall defender had misjudged his direction in an attempt to clear.

Bankies were cock-a-hoop, this being the third goal in two matches that has been scored for them by an opponent.

A minute later a slip by left-back Muir allowed Graham McFarlane through, but a brave piece of positional play by goalkeeper Sandy MacLachlan saved the day when the stand-in goalie blocked McFarlane's shot.

Mick McDonald had distinguished himself a few minutes earlier with a great save following a cracking 25 yard shot from inside-right Goodwin.

Inside-left Wilson was reduced to the laughing stock of Boghead when he incredibly ballooned the ball out of the park when standing almost underneath the Bankies bar.

Dumbarton switched their wingers in a bid to overcome the Bankies defence, and this move paid dividends in the 31st minute.

Wilson found himself with the ball at his feet, out on the right wing. He slipped it back a few feet to Gallagher who played it back immediately, knocking it over the head of a defender. Wilson carried it a yard or two before squaring across goal for McCormack to knock home at the post.

The same duo combined to put the Sons ahead ten minutes later when a corner from Coleman was headed by Bolton at the edge of the box to McCormack who in turn headed on to the head of Wilson who netted from close range.

Tommy McGhee came on for the injured Graham McFarlane at the beginning of the second half.

Clydebank, with the wind and sun behind them, began to put heavy pressure on Dumbarton and it paid dividends in the 48th minute.

Goalkeeper MacLachlan dropped a Jimmy Caskie corner when he was challenged by Dougie Hay and Peter Kane was on the spot to tap the ball home.

Alan Munro almost added another when he headed a Caskie corner towards the empty goal but left-back Muir appeared from nowhere to kick the ball off the line.

After persistent fouling, Goodwin fouled once too often and was booked for bringing down Caskie.

Dumbarton had what looked like a reasonable penalty claim turned down when left-half Johnny Graham fell spread-eagled in the box as he tried to force his way through the defence, but the referee waved play on.

A piledriver of a shot from Tommy McGhee could only be watched helplessly by MacLachlan as it soared millimetres past the post. If it had gone in it would have been one of the most spectacular goals seen at Boghead for some time.

Five minutes from the final whistle, Clydebank got the winner and they have to thank Tommy McGhee for giving them the opportunity. He challenged MacLachlan, who had the ball in his grasp, and the Sons keeper moved inches over the bye line to give away a corner.

Jimmy Caskie took it and as I said at the beginning, Peter Kane headed the ball first time into the net.