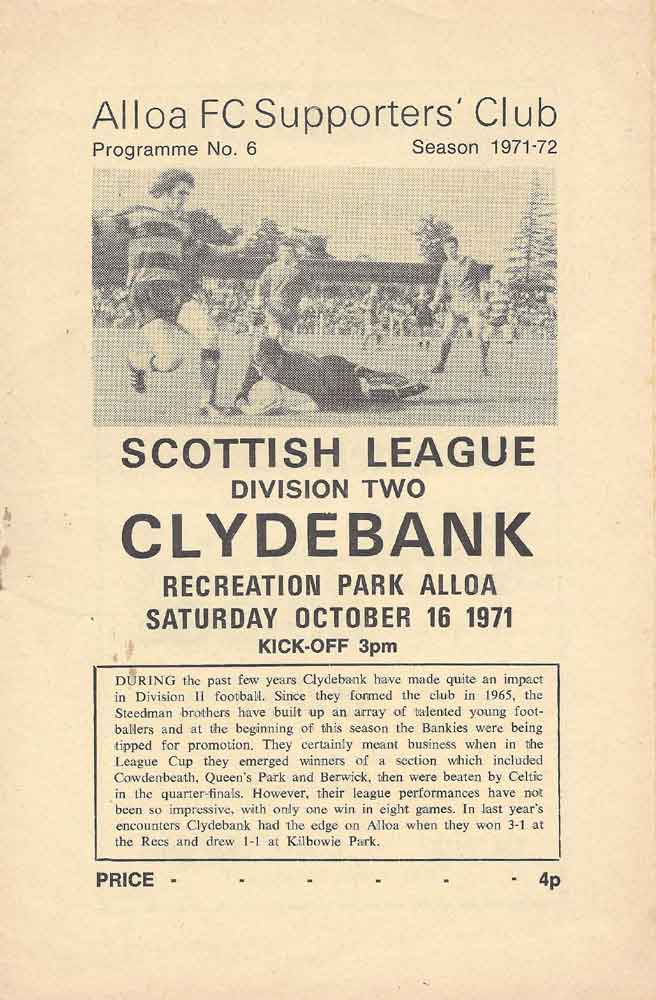 CLYDEBANK boss Jack Steedman said there would be changes in his team's line-up for this game after their recent bad run. And he kept his word. Out of the team went injured left half and skipper, Dougie Hay. Out went Norrie Hall, who had taken over from the rested Denis Ruddy the previous week.

Big Dennis came back to right half, Alan Munro took Hay's position and into the forward line came Ian Currie and Drew Clarke. Graham McFarlane took over at inside-right from the suspended Bobby Love.

Mr. Steedman was taking a chance introducing so many changes in his team at once, but he was desperate.

In their previous four outings, the Bankies had scored one goal and conceded seven. Hardly a record to be proud of. It was a move that deserved to work, and it did, up to a point. (Pardon the pun !)

Each player played with new-found determination. If he lost the ball he didn't stand and curse his bad luck. He chased back and fought for re-possession

Munro looked strangely out of place with the number six on his back but the blond bomber confirmed the confidence his boss placed in him, by playing his heart out in midfield. His midfield partner McFarlane tried hard to make an impression on the game, but after a bright opening he faded out of the game, occasionally bursting back on to the scene,

Jim Fallon, made captain for the day, and Davie Mitchell, were as usual outstanding in defence, and up front, Peter Kane began to shake off the effects of a bad spell in the past few games to return to something like his old self.

The two newcomers to the forward line, Currie and Clarke, couldn't be faulted for trying and, given a while to settle in, could prove extremely useful

Playing down a slope that made Easter Road look like a lowland plain, the Bankies soon had The Wasps defending.

Almost immediately Currie hared his way to the bye-line before cutting the ball across goal but Jimmy Caskie's shot was blocked by a wall of defenders.

More pressure brought more chances and, after clever work by Mitchell, Kane found himself through to thrash the ball goalward from almost the bye-line but Alloa's goalkeeper McWilliams managed to block his shot.

In a break-away, Alloa centre-half Brown had the ball in the net following a corner, but the referee, right on the spot, saw Brown shove a defender before heading the ball, and disallowed the score.

There was a bit of confusion over this goal as the Alloa Press boys didn't notice the referee had disallowed it and sent through their reports to their various papers with the goal standing.

Alloa right winger J. Campbell found himself right through but Mike McDonald did well to block the ball as the winger bore down on goal.

The ever-alert Kane put the Bankies into the lead in the 28th minute when he took a pass from Mitchell, side-stepped a defender and sent a low shot underneath McWilliam's body.

It seemed Clarke must score four minutes later when Caskie set him up but the inside-man made a slight hash of his shot, sending it over the bar, the boundary wall of the park, a railway line and into a children's play-park where some boys had a rare game with the ball before reluctantly returning it.

Alloa equalised in the 58th minute. A shot from Laurie came off a post and rebounded to the wing where it was returned back across the face of goal for McCallan to push the ball over the line.

Minutes afterwards, Clydebank made a move that was to change the course of the game. They took off Kane and brought on Tommy McGhee.

McGhee took over at left-half and Munro was moved forward to his usual position. The team was knocked out of the rhythm they had built up and almost immediately Alloa came right back into the game.

They took over the role of attack and gave thTe he Bankies goal a pounding. If they had had a forward of real striking power, Bankies would have been in trouble.

As it turned out, it was an Alloa forward who found himself in trouble. Ex-Morton favourite Willie Allan was booked following an incident with McDonald when both fell in a heap following a goalmouth scramble.

Bankies mustered one or two more attacks but these came to nothing.