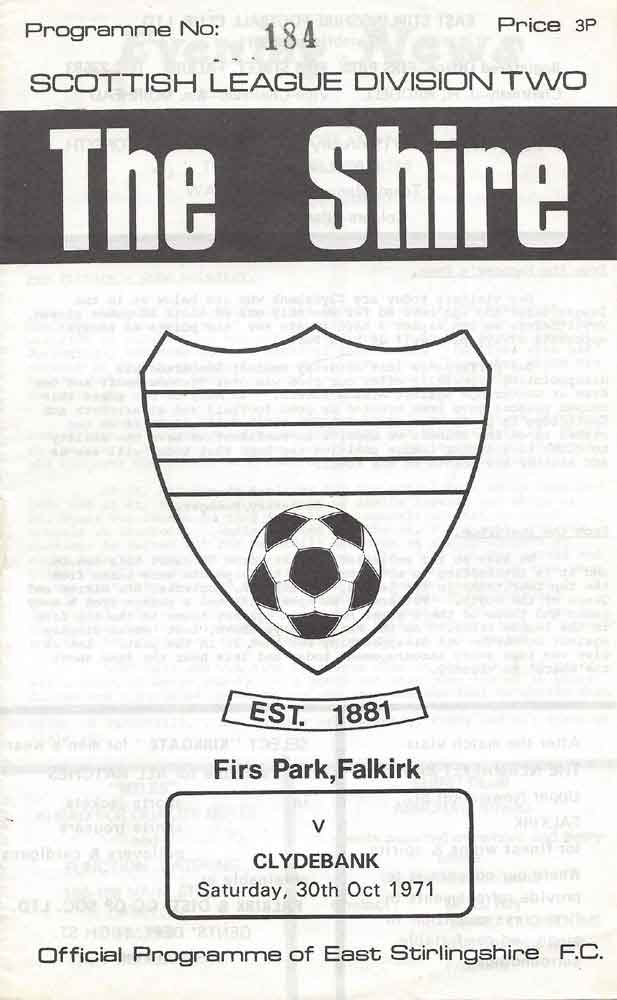 Clydebank manager Jack Steedman this week made a scathing attack on an element who frequent the Kilbowie terracing and who, he claims, are virtually ruining the team's home performances.

His no-punches-pulled outburst came after Bankies had taken two points from East Stirling, to bring their away league record to two wins, two draws and one defeat and that against Albion Rovers, with virtually ten men, following Dennis Ruddy's sending off.

The boss was pleased with this “above promotion standard ” record for away games. But the angry words came when he spoke of the team's home results in the championship.

“We've been worried about this, and have had a talk with the players," he said.

"And we found they were full of praise for the contingent of real supporters who follow us away with their songs and chants. But at Kilbowie, there's an element of barrackers—who make themselves heard. Perhaps our boys are professional footballers—but they're still young," he argued. "This sort of thing is getting under their skin. Some of them actually don't like playing at Kilbowie.”

He went on “When everything's going well, this bunch are quiet. But when things go wrong, they become the menace they are. This causes more harm than anything else."

The Firs Park game itself was the usual, tough East Stirlingshire vClydebank clash. And Mr. Steedman later revealed that the Bankies' winning goal, scored in six minutes, was the result of intensive training last week. The ball was in the net after only three passes. Alan Munro headed it back for Danny Gray to slam home from 16 yards, Said the manager, “ We spent over an hour rehearsing this very move at Thursday night's training session. And it paid off.”

After that, Clydebank fought a rearguard action. Gray, drafted into midfield for the day, had to come back to help out. And Jim Fallon, looking uncomfortable at right-back, took up his usual centre-half beat after Norrie Hall took a tumble - one that rulesnhim out of tomorrow's side.

Jim Caskie was again ignored by Lady Luck when it came to shooting. Some of his misses this season would have found the net this time last year.

Hitting a happier note was Dougie Hay, looking back to form andworking for 90 minutes. And Mick McDonald surpassed even his great season so far with some marvellous saves.

The defensive record again for away games of this Bankies team speaks for itself. They've lost six goals in five matches, compared with the home total of 13 in six games. Mr. Steedman, in a month-by-month analysis, before the start of the season, reckoned on October, “These three away games will be tough." Clydebank took three points from these fixtures.