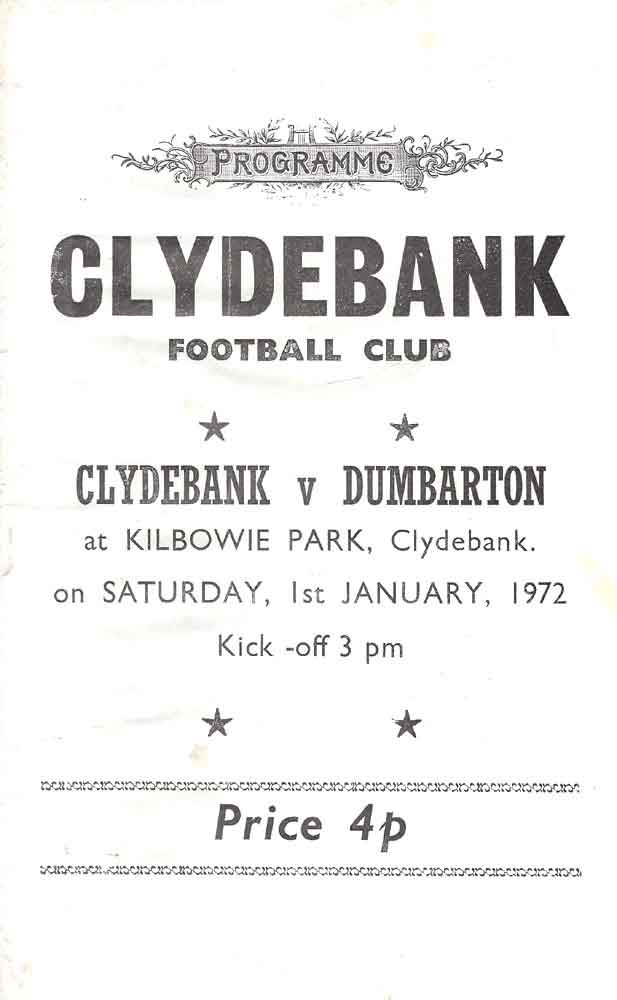 A killer 1-2 thrust late in the second half from Scotland's top scorer Kenny Wilson dumped any hopes the Bankies had of completing a league double over the auld enemy, Dumbarton. With the score at 1-1, and Clydebank doing all the pressing, Sons broke away twice for Wilson to net. And yet, I am sure even the more hardened of the Sons supporters will not doubt that the Bankies were at least worth one point.

This game followed almost exactly the pattern of play when both sides met at Boghead in September, the only difference being the scoring pattern and the final result. On this outing the Bankies came out tops in a 2-3 scoreline. On that occasion, as on Saturday, the home team had most of the play and still managed to lose.

Bankies new boy Jim McPaul had a very good debut and scored his side's first goal. He bears a strong resemblance to Peter Kane and this fact confused more than one of us in the Press box at some time during the game.

Another player who can feel well pleased with his performance is Jim Fallon. I am sure this boy is after Tommy McGhee's title of Mr Versatile. He started this game at left-back, played the greater part of it at centre-half and ended up at centre-forward and celebrated the fact by scoring the Bankies second goal.

If he had been in the forward line right from the kick-off I am sure Clydebank could have upset the form book but Danny Gray was ruled out through injury and Fallon was pulled back to left-back.

But, with the game only about twenty minutes old. Fallon was pulled into the middle at the back alongside Dennis Ruddy in a bid to keep down that goal-scoring twosome, Kenny Wilson and Roy McCormack.

Mitchell moved to left-back and Norrie Hall to right-back. Until this move, the home side were receiving a hammering. Sons, inspired in midfield by Charlie Gallacher and Johnnie Graham, were by far the more fluent outfit.

The huge Dumbarton support in the crowd were loving every minute of the game and went wild with delight when McCormack opened the scoring in the seventh minute. The ex-Yoker Athletic centre took the ball on the drop from the edge of the box to blast an unsaveable shot past Mike McDonald.
The Sons were cock-a-hoop and now began to put Bankies under some terrific pressure but, spurred on by Dougie Hay in the middle, the home support soon began to realise there was more than one side out on the park when their team started to hit back.

Bobby Love sent over a lovely cross from the wing in the 12th minute which only needed a touch to send it into the net; but there was not a Clydebank man within striking distance. Then, Bolton had to put the ball out for a corner as McPaul made his presence felt in the penalty area.

Some neat play from Clydebank in the 22nd minute deserved a goal. A Davie Mitchell cross was headed on to Alan Munro by Dougie Hay. Munro headed the ball forward slightly before trying to hook a shot. Unfortunately he couldn't get enough power behind his effort and Williams safely gathered the ball.

We were into the 31st minute of the game when Clydebank deservedly equalised. Peter Kane dispossessed full back Menzies on the bye-line before sending over a cross which McPaul took first time on the drop as he bore down on goal to send it crashing into the net.

Five minutes later Dumbarton could have taken the lead again but, as McCormack broke away from the defence, McDonald came off his goal line and successfully narrowed the Dumbarton man's shooting angle so that he sent his shot straight into the 'keepers arms.

Bankies forced three corners in three minutes just before the interval and, following one of them, Sons left-back Wilkinson kicked the ball off the line.

The second-half started where the first left off with the home side still doing the pressing. But Dumbarton were still very dangerous on the break-a fact that was almost brought home the hard way in the 51st minute.

Ruddy completely missed his kick as he tried to pass back a Williams drop kick to McDonald, allowing Wilson through. For once the striker's aim was out and he put the ball past the post.

McDonald's lightning-fast reflexes were put to good use when the 'keeper brought off a brilliant point-blank save from a McCormack header. A Menzies free-kick was headed on to McCormack by Wilson but as I said, McDonald brought the house down with a great save from the centre's effort.

Bankies retaliated immediately and McPaul took a cross from Fallon but his shot from in front of goal was blocked by a defender.

Showing he was no slouch when it came to reflexes, Sons goalkeeper Laurie Williams had a fine save in the 62nd minute. A Currie corner was headed on towards Kane by Hall but as Kane tried to turn the ball into the net he was thwarted by the quickly diving body of Williams.

Seconds after a shot from Hall flew inches over the crossbar Dumbarton brought on substitute Paterson for Miller in the 64th minute.

Within ten minutes of coming on to the park, Paterson was laying the ball on for Wilson to score. The substitute, playing on the left, sent the ball down the wing and as McDonald and Fallon came to challenge him, coolly sent the ball over the line.

As if that wasn't enough for the Bankies to stomach, five minutes later the same man scored another breakaway goal. A pass from the Dumbarton half of the field caught out the home defence which was attacking en bloc, and Wilson again slipped the ball past McDonald after evading Denis Ruddy.

Tommy McGhee came on for Currie but moved to the back to release Fallon from his defensive role. The move paid dividends with 60 seconds of the game remaining when, taking a ball from his right, he swept the ball low into the net with his left foot between Williams and the post.