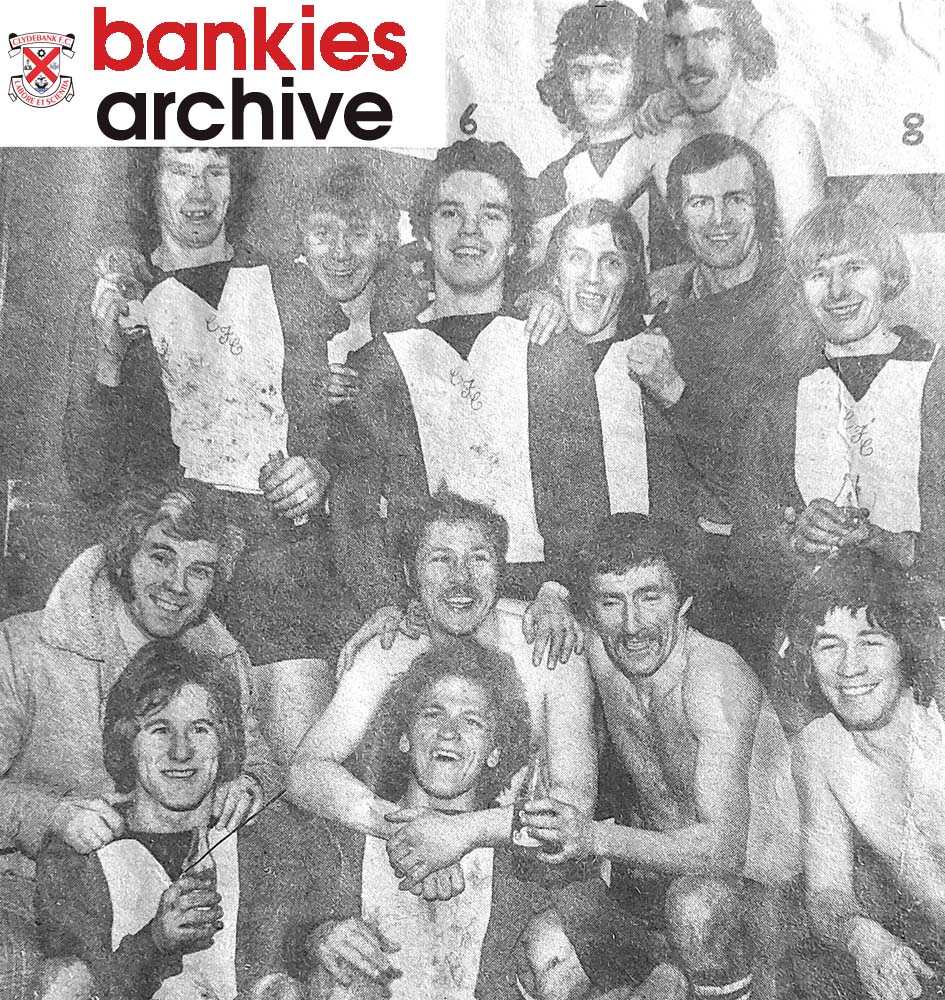 In a sensational finish Second Division Clydebank grabbed the winning goal two minutes from time to earn a money-spinning fourth round Scottish Cup-tie against Celtic, the holders, at Parkhead on Saturday, February 15.

Although bitterly disappointed by the result, Dunfermline manager George Miller was first into the Clydebank dressing room to congratulate the winners, who were watched by Celtic manager Jock Stein.

Clydebank used the ball to better effect in the early stages and had the Fife defence worried. Henderson should have done better than fire an Abel free kick over the bar with only Henderson to beat.

Dunfermline were nippy on the break. Gallacher held a Hamilton pile driver, and did well to cut out a Shaw cross before Markey or Hamilton could cash in.

Karlsen again rescued Dunfermline by punching clear a Fallon free kick, but he sent the ball to Kane who completely miscued.

Clydebank stunned Dunfermline with the opening goal in the 25th minute. Abel made the running down the left and when the ball came over MCCALLAN was right on the spot to crash it past Karlsen from 10 yards.

The Fifers fought back with tremendous gusto and Gallagher's handling was first class.

In the 43rd minute McNicol was booked for a foul on Gallagher.

Dunfermline were a different lot at the start of the second half and their First Division class paid dividends with the equaliser in the 50th minute. SINCLAIR was right on the spot when Watson took a corner to latch on to the ball, pivot, and give Gallagher no chance from close range.

Dunfermline took McNicol off in the 65th minute and sent on Reid as substitute.

Markey became the second Dunfermline player to be booked when he had his name taken for pulling down Cooper.

With 10 minutes left, Clydebank took Larnach off and Law replaced him.

A grandstand finish by Clydebank brought a sensational winner. Two minutes from the end a McCallan shot was blocked by Karlsen and KANE slammed the ball into the empty net.

No one in the 3500 crowd, not even Fife manager George Miller, could deny Bankies deserved this win that gives them a fourth-round tie against Celtic at Parkhead.

They won because they played better, fought harder and took their chances more efficiently than a dreadfully disappointing Dunfermline side, and their hero was Kane, who says: “Just say I'm 33 years old. Someone might believe that."

Minutes after the final whistle the victory chants rang round the Clydebank corridors. Of course, Clydebank won't be able to live with Celtic, but last night they deserved their moment of glory.

Their style might not have been sophisticated, but it was effective.

Dunfermline just never got going and Miller admitted: “For a team of full-time professionals to go out against a team of part-timers and play good football for just 10 minutes wasn't good enough.

They knew they had a chance of playing in a big game and they blew it.

In fact, one of the surprises of this match was that Clydebank had to wait until the very last minute for their winner.

With Celtic boss Jock Stein watching from the stand, Clydebank dominated a shaky Dunfermline team almost from the start.

Fired But in 24 minutes Joe McCallan, bargain-buy from Alloa two years ago, put Clydebank into the lead.

Once again Dunfermline defenders conceded the ball in the air and McCallan quickly fired a 15-yard shot past Karlsen.

Dunfermline had hardly made a chance in the first half and their frustration showed in a 40th minute booking for McNicoll for a foul on Clydebank goalkeeper Gallagher.

For a short spell in the second half Dunfermline improved and Jackie Sinclair equalised after Kinninmonth had won the ball in a goalmouth scramble.

But after that it was back to the old routine.

Jim Markie was booked for a foul on Cooper near the end, and in the last minute a long ball through the middle wasn't cleared, McCallan had a shot blocked by Karlsen and Kane stepped in for the winner.