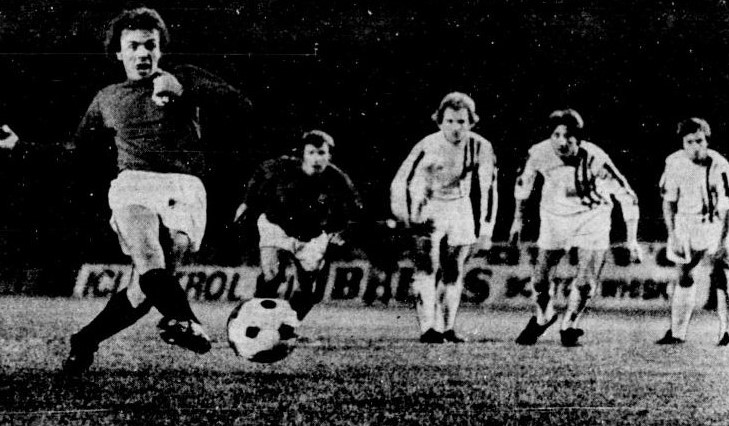 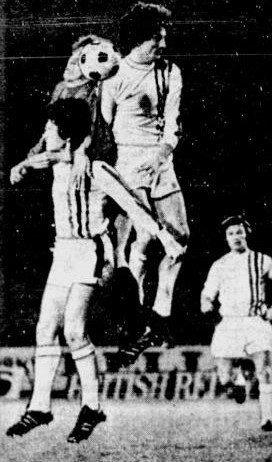 League Cup holders Rangers and Clydebank are still locked together. Including last night's match at Ibrox the two clubs have now played a total of 330 minutes.

Now they will meet for fourth time at Firhill tonight with extra time once again to decide which one will meet Aberdeen in the semi-final at Hampden next week.

All credit to Clydebank for yet another superb performance in holding Rangers on their own ground.

How the Light Blues must regret that second-half penalty miss by Alex Miller, but all credit however to ex-Arbroath goalkeeper Jim Gallacher for a wonder save,

In hard cash it means a lot more money for his club.

Rangers obviously meant business right from the start. Inside seconds Parlane had lashed a McLean opening inches past. Then a MacDonald pile driver flew narrowly past as Rangers hemmed in their opponents.

When Bankies hit back Larnach lost a golden opportunity to put them ahead. McCallan did the leading up before squaring to Cooper who left Larnach with only Kennedy to beat. But, after closing in on the keeper, the centre lashed the ball into the side netting.

Then McCallan failed to lob the ball into an empty net after Kennedy had raced from his charge to beat Larnach to a through ball and lost the race.

Cooper took the eye with a mazy dribble in which he beat three opponents before being fouled by MacDonald. The right winger took the free kick himself and his 20-yard left footed shot was brilliantly punched away by Kennedy.

Parlane missed a chance in Rangers' next attack by failing to get a touch to a perfect centre from Mclean with Gallacher stranded.

McColl was impeded by MacDonald bursting through. Cooper's free-kick went to Hay whose header was soaring home until Kennedy sprang full length to grab the ball on the line,

Following a short corner on the left taken by McKean to Munro, the left winger swung the ball to the far post where Jackson's header was well held by Gallacher. Then, a Lumsden free-kick, following a foul by Jackson on Cooper, skimmed the bar.

Kennedy took Rangers out of a really tight spot with another superb save when Jackson, in trying to clear miscued and almost nodded the ball into his own net.

The second half began with another typical solo burst by Cooper before being sandwiched by Greig and Miller. Lumsden's free kick went to McColl who shot straight at Kennedy.

Fanning was booked in 51 minutes for pulling down Parlane as the Ibrox leader raced past him.

Sensation in 59 minutes when Rangers missed a penalty kick. McKean ran through on a long ball, from Miller and was pulled down inside the box by Fanning and Provan.

Clydebank protested but the award stood. Miller took the spot kick but Gallacher sprang full length to grab the ball on the line and was immediately swamped by his delighted clubmates.

Rangers took McLean off in 67 minutes and sent on Henderson:

Jackson was next to have his name taken for a foul on Larnach but it seemed a harsh decision.

Clydebank took Provan off in the 73rd minute and McLaughlin replaced him.

Miller was taken aside and booked in 79 minutes' for a foul on Cooper
With seven minutes to go in an all-out attack by Clydebank, Kennedy had a point-blank save from a Larnach.

At the end of the first period of extra time there was no change in the situation but for the last 15 minutes Rangers took Munro off and Watson substituted.

---
Report 3
---
Rangers and Clydebank last night extended to five-and-a-half hours the total time they have faced each other in a quarter final of this season's Scottish League Cup and they are no nearer a result after a long evening at Ibrox Park. They meet again for the fourth match at Firhill tonight and then at least Aberdeen's semi-final opponents will be known for penalties come into operation.

"Firhill for thrills" is as a good a place as any for the key finally to be unlocked. A crowd of about 15,000 watched the latest instalment of a football tie that has already assumed the long-running decision of a television soap opera and it has become as predictable as most of that breed.

Clydebank, as they had been at Kilbowie Park last week, were again worthy of the draw, and there was embarrassingly little to separate the sides. They owed their continued existence in the cup. however, to an inspired piece of goalkeeping by Jim Gallacher, who capped his night by saving an Alex Miller penalty. Cooper again caught the eye, but Rangers missed an absent trio of Hamilton, Forsyth, and Johnstone,

One imagines that Rangers might escape to go a stage nearer in defending a trophy that is in Ibrox at the moment, but whatever the outcome they will want to forget this long, arduous duel against the unfashionable people from down the road and the other side of the river.

A drab period of extra time came at the end of a second half of rising excitement in which Rangers were awarded a penalty of dubious merit and they contrived to miss it. After 59 minutes McKean made fast ground down the middle and on the edge of the penalty area was bundled off the ball by Fanning and Provan. It was six inches either way and referee Muirhead was 50 yards behind play. But he was insistent on giving the penalty. Miller, who misses seldom, drove hard and low while Gallacher dived brilliantly to save. This was the miss that sent the game deep into the night.

In the second half there were three bookings as the quarter-final tested the nerves of the players and the patience of the supporters. Clydebank's Fanning and Rangers' Jackson and Miller were cautioned for fouls that were indiscreet, but the important fact throughout was that there was precious little to suggest which team were Scottish champions and which came out of the second division only a few months ago.

The holders might have won the tie in the absolute last seconds of normal time when Gallacher was at last beaten, but Parlane's shot was scrambled away from the line and so the deep of the night beckoned as the match went into its sixth hour undecided.


The first half had been exciting enough, if inconclusive. Clydebank were in no mood to surrender even the parity that the previous three-and-half hours of football had given them. They showed no fear of the holders and fair conceit of themselves, even if they could not score.

After only five minutes that splendid pair of forwards, Larnach and Cooper, worked their way through the Rangers defence and from the winger's final pass the striker hit the side rigging with a sliced shot. Ten minutes later Cooper hit a vicious free kick which was palmed over with little difficulty by Kennedy. Those were the early statements of their intentions. There were even more to follow. After 20 minutes Cooper's long free kick from the right, swung round the line of defenders, was met impeccably at the far post by the advancing Hay. His header was harshly struck and Kennedy had to make an instinctive save high at the top corner to stop Rangers from falling behind.

Rangers did their own work, of course, and some of it was very good. Their best moment came after 26 minutes when Jackson, looking better in attack than in defence, headed a Munro cross. It was saved well by Gallacher, a sign of the heroics to come. Jardine, McLean, and Parlane all had their moments, too, but the period only served to whet the appetite for the stronger stuff still to come.

On the law of diminishing returns there may only be 5000 or 30 at Firhill this evening and this correspondent will be 1000 miles away in Hamburg. He feels he can safely leave the outcome to be settled without feeling he is missing one of the highlights of the season, It has been that kind of tie, long, occasionally thrilling, but in the end, too much.