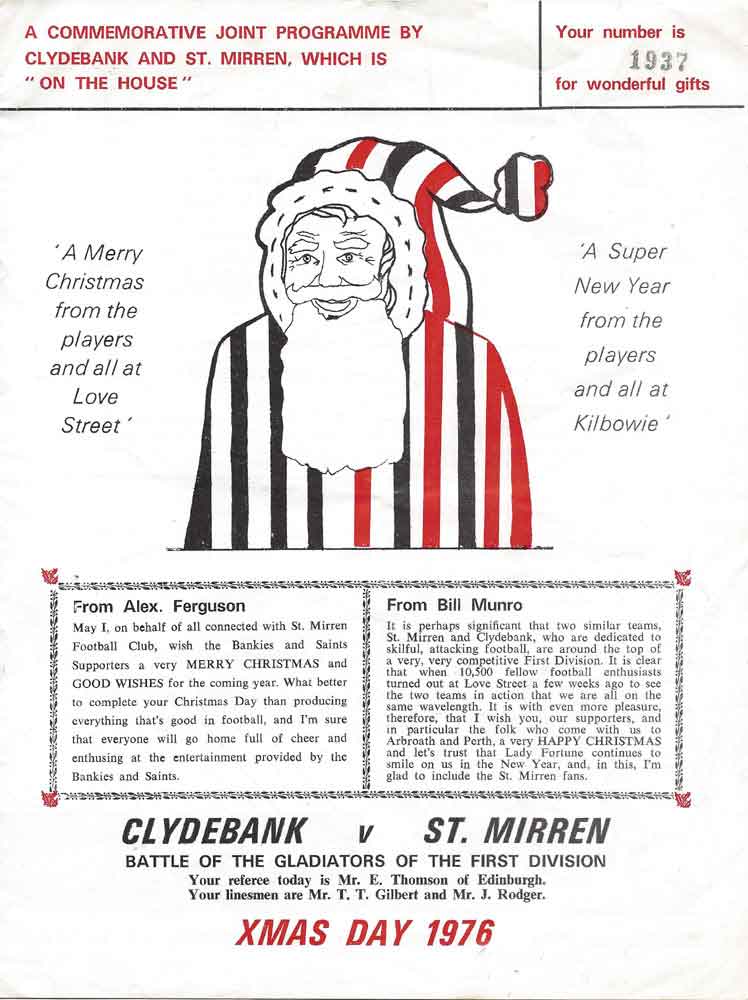 This top of the table clash never reached its expected lofty heights. True, the pitch was treacherous as any you’ll see, but add to that the apparent look of disinterest of certain players and you don’t come up with a winning formula.

The teams were too scared of each other to play much positive football. It was very much cat and mouse stuff in the opening quarter, with the visitors having territorial advantage without threatening deputy keeper Roddy McKenzie.

A McDowell header from a Beckett free-kick flashed over the bar and a Hyslop effort from a Richardson cross slid just wide. Saints continued to look the better side, especially in midfield as Bankies surprisingly looked reluctant to come forward. Beckett and McDowell carved open a chance for McGarvey, but the winger shot into the side netting.

The home fans were growing restless as Bankies struggled to reach Hunter, but they were given hop in the 20th minute when Mike Larnach broke on the left. His cross was played on by Jim Fallon to Joe McCallan whose lob over Hunter looked a scorer all the way but faded just past.

In the 25th minute, however, it was smiles all the way on the Bankies' fans faces as the homesters took a shock lead. In their first sustained burst of pressure Callaghan moved the ball across the penalty area to Billy McColl, but when Johnston robbed the midfield man it seemed the danger was cleared. However, the full-back slipped the ball back to Hunter and Mike Larnach was there in a flash. Dragging the ball round the despairing keeper, Mike fired into the empty net to bring a sea of red and white to the terracing.

Before the shocked visitors had time to recover, Mike Larnach laid on a chance for Joe McCallan who shot only a fraction wide.

Then came the trouble as fans invaded the park to escape bottles and cans and the game was held up for six minutes.

On the restart some of the impetus had gone, with St. Mirren's early aggression now evaporating and just before the interval Bankies almost increased their lead. Davie Cooper beat two men and his shot from 20 yards was blocked by Hunter, who could not hold the ball. However, as Joe McCallan raced in for the kill, the keeper bravely dived at his feet to save his side.

Five minutes into the second half Bankies incredibly found themselves two goals up.

Cooper sent Lumsden clear on the right, but his cross beat everyone and looked to be going out of play. Joe McCallan had other ideas, however, and raced after the ball, caught it on the line and returned it into the middle. As the Buddies' defence hesitated, Kilbowie went wild as Billy McColl popped up from nowhere to stab the ball into the net.

St. Mirren probably couldn't believe that they had been so much on top and yet were two goals adrift, but a master stroke by Alex Ferguson had them back in the game within seven minutes.

His substitution of Torrance for McDowell was not too popular with some of the vast travelling support. However, with his first kick of the ball, the sub pulled one back. The home defence got themselves into a terrible tangle as McGarvey and Torrance ran at them and when the winger slipped the ball through, the sub, hammered a shot from 12 yards well out of McKenzie's reach.

This gave the Buddies new heart and they came at Bankies time and time again. It was surprising to see Bankies defending in depth and passing back to the keeper so often, one got the impression that they were giving the visitors just a little too much respect

St. Mirren did not need any favours, however, for, in the 72nd minute, they deservedly equalised. Richardson won a corner on the left and when the ball came over it was cleared only as far as Stark, standing 25 yards out. The big midfield man steadied himself, took a few paces forward, then, as half the Bankies team charged at him, he cracked the ball past the despairing McKenzie into the corner of the net.

Surprisingly after this, Bankies had the best chances to win, with Mike Larnach twice firing just wide, but in the dying seconds Hyslop broke through and it took two brilliant tackles by Norrie Hall and finally a finger-tip save by Roddy McKenzie to keep the ball out.

A draw was a fair result in a game that was exciting in patches, but never really lived up to expectations. It was disappointing that Bankies adopted such a defensive attitude, but a credit to St. Mirren that they forced the pace for much of the game.

---
The Trouble
---
It was a white Christmas with black stripes in Clydebank as seven thousand pilgrims from Paisley invaded the town to see their team St Mirren play the Bankies in the top of the table clash at Kilbowie.

Unfortunately not all the visitors brought festive good cheer with them. Trouble began half an hour before kick-off when hundreds of Saints fans charged like enraged bulls at the greatly outnumbered home supporters.

Several cans and bottles, not all of them empty, were thrown. Peace was restored relatively quickly and Clydebank Director Jack Steedman pleaded with the fans to behave themselves.

He said, “We have deliberately kept the police presence to a minimum, but if there is another hint of trouble we shall have to call in reinforcements."

Regrettably, the trouble flared up again during the match. After 25 minutes, Clydebank took the lead through Mike Larnach, and as the Bankies' fans celebrated, they were showered with bottles and cans thrown by the Paisley supporters,

As they scattered, the home fans were again chased by a wave of about 200 drink-crazed youths,

Running fights broke out, and fathers had to throw their young sons over the barrier and on to the playing surface to avoid the danger.

Referee Eddie Thomson, of Edinburgh, held up play for six minutes as order was restored, and extra police brought in from Glasgow's support unit.

Eleven arrests were made, and at least one youngster was carried from the arena on a stretcher. Clydebank's first aid boys were run off their feet tending to the many with cuts and bruises.

Again Jack Steedman pleaded over the loudspeaker for order to be restored. He said: “This is the first trouble we have had in 11 years of Senior football, and it's spoiling what should be a great occasion.”

Although there were a few more minor scuffles, no more major incidents occurred, and the match ended in a 2-2 draw,

Luckily the hooligans did not interrupt the pre-match festivities. Santa Claus led both sides on to the pitch and each player sported a giant letter above his head which all went together to spell "MERRY CHRISTMAS."

Each team manager, the linesmen and the referee were presented with gifts, and the players distributed plastic footballs among young boys in the crowd.

Most people had a great afternoon.

Nine of those arrested appeared at Dumbarton Sheriff Court on Monday charged with causing a breach of the peace. Six pleaded not guilty and will appear again for trial.