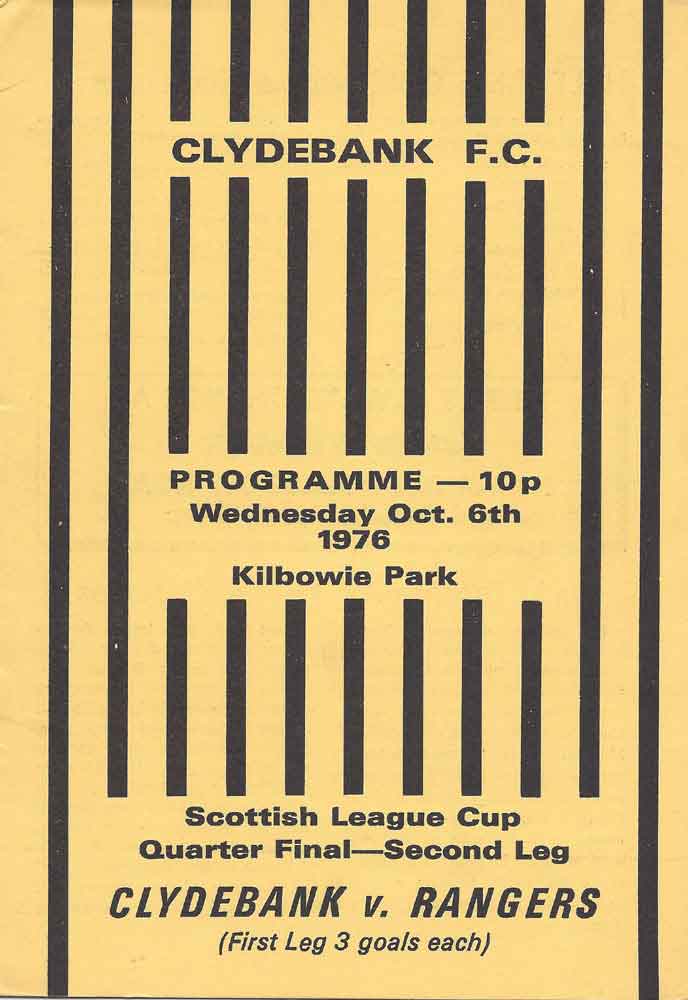 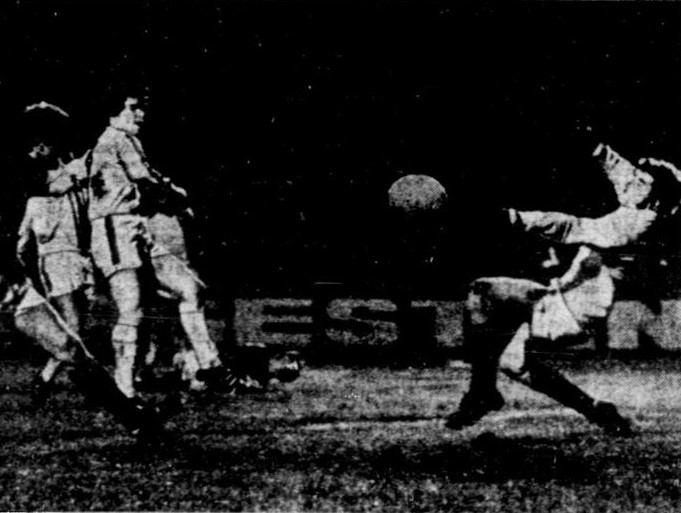 Bill Munro was a proud, proud man on Wednesday night at about quarter to ten. He, and 10,000 others, had seen Clydebank match the mighty Rangers in every way for the second time in as many weeks.

What a magnificent game it was. Both sides deserve the greatest credit for serving up such fine play on such a filthy night.

Rangers were the better side in a fast and furious first half and they just deserved their goal a minute before the interval. Greig was the scorer from close in after Parlane had led up well.

Clydebank had their chances though. Larnach had a shot which went narrowly wide and McColl and Abel each had good headed efforts which came close..

Bankies' hero of the first half though was keeper Gallacher who played spotlessly and made two super saves from McDonald and Jardine.

After the interval it was all Clydebank. They began to play with a great deal of composure and co-ordination - something that seemed to be lacking in the visitors' side.

After 15 minutes Davie Cooper scored one of the best goals ever seen at Kilbowie. He picked up the ball just inside the Rangers half, waltzed forward, dribbled round two men as if they were lamp posts and unleashed a thunderbolt from 35 yards that did everything but break the net. The Rangers fans looked in disbelief saying to themselves: "If only we had a Cooper."

Things became a little scrappy after that and though Clydebank's mistakes Rangers began to come more into the game. Then Clydebank had the ball in the net again. Larnach head flicked the ball to McColl who volleyed home. However, he was adjudged to have been offside.

Rangers had the better of the first period of extra time but they could not turn pressure into real chances.

Bankies dominated the last period of the match. Larnach was clean through but his shot was brilliantly saved by a very much on form Kennedy.

Then in the last minute Rangers stormed upfield and only two super saves by Gallacher prevented the Ibrox men from grabbing a late winner.

This was the kind of game to bring the fans back to the terracing,

Clydebank manager told me after the game: "We could have won. I thought McColl's goal was good but nevertheless I am happy. The whole team played magnificently and I'm absolutely proud of them.”

The decider will take place at Ibrox probably on Monday week.

With a spectacular shot in 62 minutes he scored the equaliser for which Clydebank had worked so hard and well. Alas, nobody could emulate his feat in the tense period of extra time, and so the teams must meet again.

Rangers unfortunately lost Tom Forsyth with a pulled leg muscle as well as a little of their prestige. He is due to link up with the international squad today but must now be considered doubtful for next week's World Cup game in Czechoslovakia,

Bankies began cautiously prepared to sit back and soak up Rangers pressure. But in spite of their good organisation Johnstone quickly strung together three scoring attempts.

Soon Bankies grew bolder and by midway through the first half they were the equal of the Ibrox side.

Larnach might have scored with a shot which skidded across goal but in 24 minutes Jardine forced Gallacher into a marvellous save.

Just before the interval and minutes after Forsyth had limped off to be replaced by Henderson, Greig shot Rangers ahead when he took a pass from the substitute.

But Clydebank were too ambitious to fall out of the game and Cooper's equaliser fired from all of 35 yards from a pass by Lumsden was no more than they deserved.

Shortly afterwards McColl, who like Jackson was cautioned, had the ball in the Rangers net again but the referee ruled offside.

--
Report 3
---
Clydebank, just 11 years old, last night proved to 10,000 people at a packed Kilbowie Park that history and tradition count for nought when two teams are locked in cup-tie football. Rangers, the scrambling aristocrats, survived but only just.

The second division champions of last season again matched the holders of the entire collection of major Scottish silverware in a league cup quarter final second leg that now goes to a third match later this month and only those in the far distance would say that they have no chance of eventually winning.

Clydebank matched Rangers for the two hours that this tie cascaded over the pitch and, deep in the second leg's extra time, might even have won. They came back after John Greig had given the big men the first goal, equalised through Dave Cooper, and generally showed that they are the coming club in Scottish football.

How splendid it all was. Clydebank, the place which normally reads about itself in grim industrial headlines, can now turn to the sports pages for delight and comfort. The tiniest grandstand in the world rose to them at the finish as they extended their unbeaten run to 15 matches.

They are not a one man team. Davie Cooper may be potentially the most expensive product to be taken from Clydebank since the Cunard line accepted delivery of the QE2 but he was quiet and it was the others the goalkeeper Gallacher and Fallon, the defender - who made a third meeting inevitable.

Your correspondent watched play from behind the plate-glass windows of the social club, took tea at hall-time, and has rarely watched football in such civilised surroundings or among more friendly people.

They were angry only occasionally. In the tenth minute when Colin Jackson was booked for shirt pulling, someone said "Real juvenile stuff that." Their evening was only spoiled immediately after the barmaid shouted out the good news, "The pies are up."

The digestion was spoiled when Rangers took the lead after 43 minutes, always a bad time. McKean crossed long from the left, the ball was half cleared, and Greig volleyed home smartly. "Captain Bird's-eye does it again," said one sorrowful Bankie.

But they were level on the hour. Cooper, coming into the match at last, gained the ball 40 yards out, sprinted 20 yards, and then hit a shot which Kennedy, playing well, would always have been struggling to reach. The ball struck Jackson and the deflection left the goalkeeper helpless.

After that Clydebank bad the ball in the net from McColl after 72 minutes but the attempt was ruled offside and Rangers, coming strongly, at last attacked with some purpose and made up for the missing Forsyth, who was substituted when he pulled a muscle.

But it was to be extra time and the fun started all over again. In 107 minutes Larnach made a long run and his shot was only kept out by Kennedy making a pre-Wembley save high at the far post.

Three minutes later Greig limped out of the game and Gallacher made saves from Parlane and a Hamilton header which ensured that Clydebank took the match to another meeting.