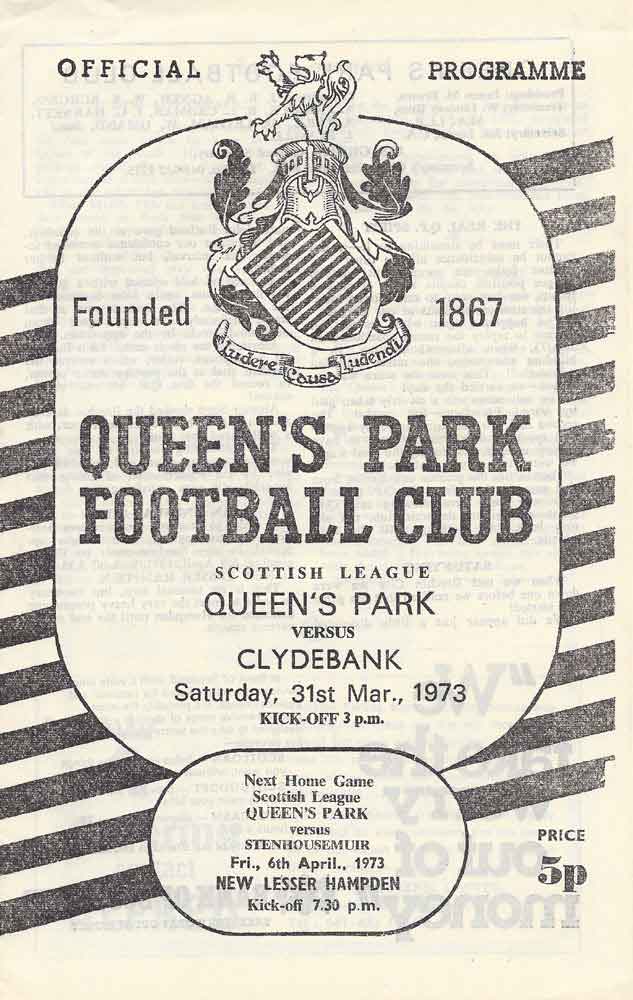 A wet wind goes snaking round the empty terraces, the huddled crowd much diminished in the echoing wastes, look as lonely as Jonah in the great whale's maw of Hampden.

A fellow reporter's remark was a cruel, albeit pertinent, quip on Scottish Second Division football.

"Quite a crowd", he nodded, gesturing at the terraces, "Do you know them?"

As for the play itself, the muddied footballers were at times reduced to the kind of lumberingly slow motion tactics where ball control becomes a matter of chance rather than skill on the skid row field.

Both Clydebank and Queens Park were pinned to defence right at the start of the game. There was a slight chance of a goal for the amateurs when Wylie crossed to Franchetti to shoot, but Bankies Mitchell cleared the ball off the line.

McColl did a couple of nice runs in these early moments, but two swift corners by Borland made the moments in any magical.

Without falling foul of the pathetic fallacy, it was the rain itself that figured as the third major opponent in the game as it did a terrific strain on the players.

Clydebank pocketed the lead in the 11th minute with an exquisitely engineered goal. Abel carried the ball almost to the bye line. The clever full back handed it to scorer McCallan who neatly headed home.

Clydebank settled into a more effective game - with McGowan rescuing Queens when McCallan centred from the left, McGowan heading off the line a Harvey shot.

Thomson very nearly walked away with the equaliser with a flying header from a Borland corner that unfortunately struck the bar and went over.

Fallon was booked in the 33rd minute for a foul on Scott.

An awful lot of searching passes marked the first half before Spiders equalised with a Borland close range drive, after Franchetti had swung the ball to the far post.

Bankies defence definitely slipped there, the ball ought to have been swept away at that point.

At the restart Franchetti's talent reared up again, putting Queens ahead in the 54th minute - a beautiful foal, a superlative piece of teamwork that saw McKay beat three men and rolling the ball to the scorer, who slipped it to the back of the net. A real highlight that!

Another goal followed almost immediately, a Mitchell cross and a Larnach score. This was a fine sweep that went well beyond Rowan's reach.

After that the amateurs found Clydebank difficult to crack, despite excellent use of the ball by inside forwards Franchetti and Scott.

From there on the ground did not cut up as much as expected (Will the blow lamps be out for the game tomorrow?), and some Queens who delivered us from the pervading ennui and cold.

It was more than mere concern for punctuality that compelled many of the press into wondering whether referee had forgotten to sound the final whistle.