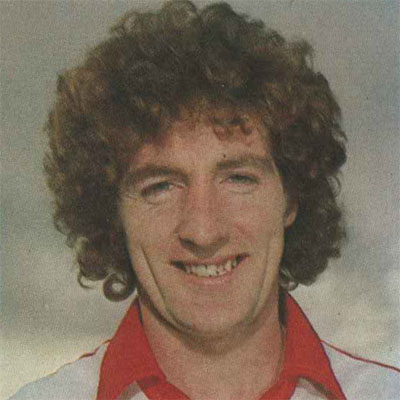 Gerry McCabe is one of the greatest players ever to wear a Clydebank jersey. Anyone who had the privilege to watch him in action for the Bankies in the 1980s would surely testify to this statement. He had an effortless grace about him, and he always seemed to be one second ahead of his opponents, and sometimes his teammates! He wasn’t the greatest of goalscorers, but a great creator for others. He had the knack of creating space for himself to make the killer pass that helped the likes of Blair Millar, Tommy Coyne, Bobby Williamson and Mike Conroy to score the goals that they did and secure moves to other clubs.

Gerry had been former Scotland manager Craig Brown’s first signing for Clyde in 1977 after he was released from Hibernian as a youth. He caught Jack Steedman’s eye when he scored the winner against the Bankies at Shawfield in August 1979. After a poor league season, Steedman was prompted to shell out a club record £55,000 for the then 23 year old McCabe. This was a fee that was never beaten although the Bankies paid a similar amount for Jim Rodger and Jamie Fairlie from Airdrie in 1986 with Martin Hughes going the other way. Even the great Ken Eadie was a snip at £35,000.

Clydebank were undergoing a bit of a transition in Gerry’s first season with the club, and the Bankies had a second poor league season in a row in the first division. The club did excel in the cup competitions, reaching the quarter finals of both the League and Scottish Cups losing out to Dundee United and Morton respectively.

It was the following season that Gerry truly settled in at Kilbowie Park. He had his best goal scoring return of any season netting nine times. The club were becoming a force again finishing fourth in the table after fading at the finish line behind Motherwell, Kilmarnock, and Hearts.

The Bankies began to have the reputation of being the bridesmaid but never the bride as they finished 3rd in the league in 1982-83. Gerry was instrumental in the midfield scoring against league winners St Johnstone in a memorable 6-1 thumping at Kilbowie Park. Gerry’s influence was beginning to be spotted further afield as he represented Scotland in the semi-professional tournament alongside Jim Fallon, Gerry McLauchlan, and Jim Gallacher. The Bankies contingent enjoyed considerable success as Scotland won this trophy in 1980, 82 and 85.

More notably he was short listed for the First Division Player of the Year where the other nominees were Mo Johnston, Donald Park and Pat Nevin. Gerry picked up the award from his fellow professionals for the first time and as he entered his prime he would win this accolade three years in a row.

With this recognition came interest from other clubs. It was not unusual at Kilbowie in the 1980s for a number of players to be signing month to month deals as they sought a move to a bigger club. Clydebank never stood in the way of a player’s ambitions as long as they were suitably compensated. Gerry was no different in this regard, and a proposed move to Hibernian was as close as he got, but incredibly no move ever materialised.

This meant that McCabe was going to have to do it the hard way, and get Clydebank promoted to the Premier League. After another near miss in 1984, the Bankies finally made it the following season finishing runners up to Motherwell.

Gerry’s Clydebank future was still in doubt right up to the start of the season, but thankfully he put pen to paper and he showed what a class act he was in the Premier League. He was immense as the Bankies crushed Dundee 4-0, Scored in a 7-2 trouncing of Raith Rovers, and ran the show against Rangers in a game that was criminally stolen from the Bankies with a last minute goal. It was just as he was showing his best football that he tore his groin in a 1-0 victory over Hearts. He missed a large portion of the season after that and he never quite hit the same heights again despite playing his part in the famous 2-1 win over Rangers.

Clydebank avoided relegation due to league reconstruction, but there was a mutual feeling between the club and Gerry that things were beginning to become a little stale. Despite starting the following season Gerry was allowed to move to Hamilton Accies, much to the dismay of the Bankies fans. It was a difficult pill to swallow at the time but looking back now it was probably the best thing as he was never really the same player after he left Kilbowie, even though he did go back to the Premier League with the Accies the following season.

Gerry extended his career in Ireland with Glentoran and Cork City before winding down with Arbroath and Dumbarton at almost 40 years of age.

He subsequently went into management with Dumbarton before having a long career as an assistant manager with Hibernian, Dunfermline, Queen of the South, Dundee and Brechin City.

Gerry was the fifth player to be inducted into the Clydebank Hall of Fame in 2010. As a final thought, you don’t see players of the calibre of Gerry McCabe stay at a club like Clydebank for so long. It was an injustice that such an immense talent never won any of the games major honours and only spent two seasons in the top flight of Scottish football and he, without doubt, goes down as one of the greatest players in Clydebank’s history. We were lucky to have him