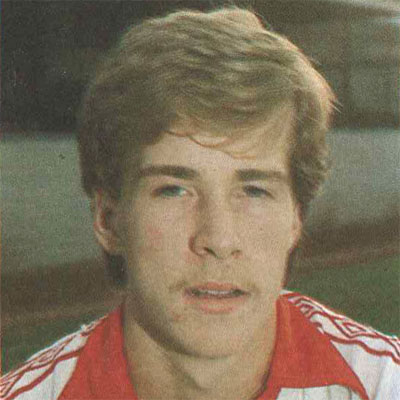 Mark Treanor was one of the fiercest competitors to ever wear a Clydebank shirt. He never gave anything less than 100% in his 333 appearances for the club, and his 61 yellow cards (a club record) is testament to his commitment. He is one of just eleven players to have made over 300 appearances for the club which he did so over two spells and was captain and chief penalty taker for several seasons.

Signed from Eastercraigs Boys Club, Mark was only seventeen when he made his debut in 2-0 victory over Hamilton Accies at Kilbowie Park towards the end of the 1979-80 season, filling in for the suspended Tony Gervaise.

The following season, Mark found himself behind Tony Gervaise in the pecking order for the right back slot, but with the Bankies having a poor season he found himself in the side more regularly and ended up making 20 appearances.

In 1981-82 it looked like being back to the drawing board as Mark found himself on the bench again at the start of the season. However, an injury to Tony Gervaise saw Mark take his chance and he would not be replaced again. His cause was helped that Clydebank did not have a regular left back at this stage, and Tony Gervaise would take up that position on his return. It was an exciting time as the Bankies were exerting themselves as a force once again in the first division, finishing fourth, after two poor seasons.

The following year Mark celebrated his first goal for the club against Rangers of all clubs as his well struck free kick put the Bankies 2-1 ahead at Ibrox in the league cup with just 24 minutes to go. Unfortunately, Tommy Coyne got himself sent off, and the ten men went down 3-2 the winner coming just five minutes from time.

The Bankies narrowly missed out on promotion for the second year in a row, but Mark was to face his biggest challenge yet when he broke his ankle in a reserve match against Queens Park in early part of season 1983-84. This coincided with the emergence of Joe Dickson, one of the finest full backs Clydebank has ever produced. Mark spent five months on the sidelines, and on his return found himself in a battle for his position.

Clydebank, again, were just out of the promotion places in 1983-84 but were to make it fourth time lucky the next season. With two top quality defenders vying for one spot, the Bankies changed to a five at the back system for the first time ever with Dickson retaining the right back position and Mark partnering Budgie McGhie in the centre with Jim Fallon sweeping behind. It was a roaring success with the Bankies having one of the meanest defences in the league losing less than a goal per game and promotion was achieved to the Premier League.

The Premier League was always a tough ask for the Bankies and they finished bottom of the table. The club were saved from relegation due to league reconstruction, but went down at the second time of asking. Mark barely missed a game in that time, and he was subject to some booing from a section of the support looking to blame someone for the overall poor performance of the team.

Mark rose above it, and on the return to the First Division Mark was appointed captain of the team. He led the club over the next few years to several near things at the top of the table, but promotion would prove elusive. He also became the main penalty taker for the club and scored against Celtic from the spot in the Scottish Cup completing a rare double for a Bankies player by netting against both halves of the Old Firm. His prowess saw him net eleven times in a row from the spot, but he would miss his last ever penalty in a vital promotion match against Dunfermline. Already a goal down to a fluke Joe Dickson own goal, Mark had the chance from the spot to equalise, but probably hit the worst kick of his career for Westwater to easily save. Although not fatal at that point, the defeat to the Pars opened up a gap that the Bankies were unable to close.

Surprisingly, Mark was sold just one month later for the paltry fee of just £30,000 to St Johnstone. At just twenty six years of age, club captain with 300 appearances to his name it was an outrageously low transfer fee.

Mark would go on to realise his ambitions at St Johnstone, by winning the First Division title and playing in the Premier League once more. He would make over a 100 appearances at McDiarmid Park and had a short spell at Falkirk before returning to Kilbowie Park in 1993. He was given a free transfer and he finished his career with brief spells at Stranraer and Baillieston Juniors.

Mark’s experience was vital as the Bankies made a whirlwind start to the season winning their first seven league matches. However, the Bankies suffered an injury crisis of which Mark was one of the many casualties as he suffered a knee injury. He barely played again as the promotion challenge faded.

He made a cameo towards the end of the season and his last ever appearance in a Clydebank shirt was to be overshadowed, as Falkirk were to win the league title at Kilbowie Park in May 1994.

At the end of his career Mark had played 333 games for the Bankies netting 17 goals. There is no doubting that Mark was a seriously underrated player, he was a magnificent servant for the Bankies and he was rightly inducted into the Hall of Fame in 2014.